The multitasking designer is the latest to design an exclusive capsule collection for the department store group.

By David Moin and Miles Socha on July 21, 2011
View Slideshow 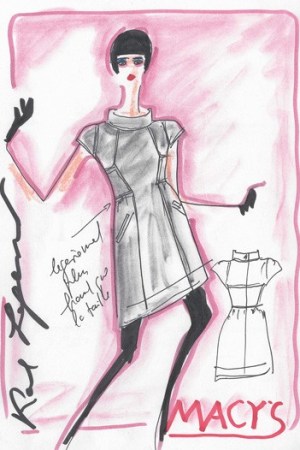 The multitasking designer is the latest to design an exclusive capsule collection for the department store group, which will launch Aug. 31 in 235 of Macy’s 800-plus stores, and on macys.com.

The Karl Lagerfeld for Impulse collection will have 45 limited edition styles and an average price tag of $100, though items will range from $50 to $170, putting it within Macy’s “better” price zone. Lagerfeld’s exclusives for Macy’s will have a limited run, from six to eight weeks, depending on consumer reaction.

The Macy’s collaboration is “a kind of test how to do this kind of clothes in that price range….As you know, I love occasional co-branding,” deadpanned Lagerfeld, who ignited the masstige movement in 2004 when he partnered with fast-fashion giant H&M on a one-time collection that sold out in a flash, spurring annual designer tie-ups at H&M and copycat strategies by other low-cost players.

The prolific Lagerfeld has engaged in numerous fashion collaborations, including H&M, Diesel, Hogan and alpine specialist Napapijri, even pens and lighters for French accessories firm S.T. Dupont and tableware for Swedish crystal maker Orrefors. “It’s interesting to see and participate in the world of others in that business on all kinds of levels,” he said.

Vocal about the splendid working conditions he enjoys at Chanel and Fendi, Lagerfeld on Wednesday told WWD that “to work with the Macy’s team was extremely pleasant,” and yielded “the right looks for the season to come and in the direction we wanted to go.”

While the designer is known to do most of his shopping in Paris boutiques — Dior Homme and Colette for clothes, Galignani for books, for example — he noted that “department stores and the ’Net are the best and largest possibilities for a certain price range.” Regarding Macy’s specifically, “It’s the perfect department store in the U.S., where everybody can find what they’re looking for without ruining their budget.”

Last September, Lagerfeld stopped showing his signature collection on the runway during Paris Fashion Week to prepare for the launch of a line based on what he calls “mass elitism,” as reported. On Wednesday, he was deep into conducting a fitting for the forthcoming launch of the masstige collection under his own name to be sold primarily online.

As for the collection for Macy’s, “it’s quintessential Lagerfeld but done at affordable prices,” Jeff Gennette, Macy’s Inc.’s chief merchandising officer, told WWD. “It’s really focused on statement jackets, tweeds, novelty fabrics, and dresses” that could either be soft and feminine, or in sculptured, tuxedo silhouettes very fitted to the body, or with Lagerfeld’s signature high collars. Iconic, graphic T-shirts, will also be standouts. “They’re the type you can see them from a distance and know they’re Karl’s,” Gennette said.

Also in the collection: airy tops; colors ranging from soft to ‘‘shocking” pink, and gray to noir; comfortable jackets with crocodile prints, and chic leggings with a rock ’n’ roll edge. “It’s all fashion,” Gennette said. “Some of it customers will get right away — some of it will be a reach.”

“There’s a contemporary spin on his signature aesthetic, with versatile, easy-to-wear pieces with a modern twist,” added Nicole Fischelis, Macy’s group vice president and fashion director. “I’ve known Karl for a very long time. He is not just about fashion. He is all about style. With Karl, it was a very easy process. You could be intimidated, but he is so amazing. He is very reachable, sharp and funny. We met with him and he knew who we wanted to reach. He gets it. He understands America very, very well. Everything is very easy with him. He is so quick. The way he designs and the way he thinks are just as fast as the way he talks.”

“There really wasn’t a lot of back and forth,” recalled Martine Reardon, Macy’s executive vice president of marketing and advertising. “We had more problems trying to edit it all. He had so many great ideas.”

Recently, Macy’s has incorporated different strategies to try to capture greater market share in contemporary, a sector where store officials acknowledge not getting their fair share. The store is stronger in traditional misses, but has been extending the Impulse umbrella to additional product categories such as accessories, men’s wear and beauty.

This year, a designer capsule collection series for Impulse was kicked off with British designer Kinder Aggugini and then followed with another one-off collection by Matthew Williamson. After Lagerfeld, Macy’s is expected to feature Giambattista Valli, though the store has not confirmed that. For the holiday season, all four designers will again create exclusive products for Macy’s, which will be gift-oriented. Macy’s design and buying teams are continuing to work with designers to create additional one-off collections for Impulse next year.

With Lagerfeld, “We are devoting the same square footage that we have devoted to other [guest] Impulse designers, but we probably stepped out a little more with a magazine presence,” Reardon said, adding that the project has been nine months in the making and that Lagerfeld will appear at Macy’s Herald Square flagship in early September to mingle with customers and fans. The collection will be bolstered by magazine and outdoor advertising, as well as QR codes in the store which shoppers can scan with their cell phones to see videos to learn about Lagerfeld and his Macy’s collection.

“It’s pretty amazing to be able to have the talent and caliber of a Karl Lagerfeld working with us exclusively,” Reardon said. “We are really excited about it. It reinforces our fashion credentials and commitment to younger, contemporary fashion.”