Could Lancel become the French Coach? 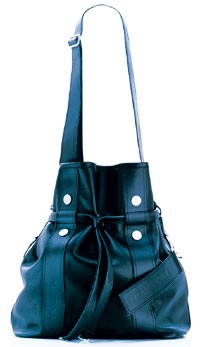 Could Lancel become the French Coach?

The 128-year-old accessories firm’s president, Isabelle Guichot, certainly hopes so, and she has set the ball rolling by revamping designs, introducing snappier advertising (featuring Liz Hurley for fall) and angling to build business in the key U.S. and Japanese markets.

“The brand’s been dusty,” acknowledged Guichot, who took the reins at the Richemont-owned firm last year. “But we’re waking it up, introducing more exciting products and a wider panoply of prices.”

“There’s huge potential for luxury access products from a strong brand,” she asserted. With the average price for a handbag in the 200 to 300 euro range ($245 to $370 at current exchange), she calls Lancel “democratic luxury. But we’re not compromising on design.”

Lancel declined to provide any figures, but market sources estimate the business generates about $100 million in revenues annually.

Guichot said leather goods make up the lion’s share of Lancel’s sales, with gifts and watches comprising the rest. She declined to project a sales impact of the new strategy, but said she is shooting for “important” growth over the next few years.

This month, Lancel reopened its 7,000-square-foot flagship on the Place de l’Opéra, which had been under renovation for a year. Guichot described the airy design as more in line with the company’s future.

Meanwhile, next year another large shop is slated to bow on the Champs Elysées. All told, Lancel has 60 shops in France, 10 in the rest of Europe and 30 in China.

At present, the brand has no retail presence in the U.S. But this November it will relaunch in America, where the company has had an on-again, off-again presence, with a showroom presentation in New York.

Guichot said she expects to sign about 20 accounts for in-store shops with major retailers in the U.S. over the next couple of years. Likewise, Lancel will relaunch in Japan this year.