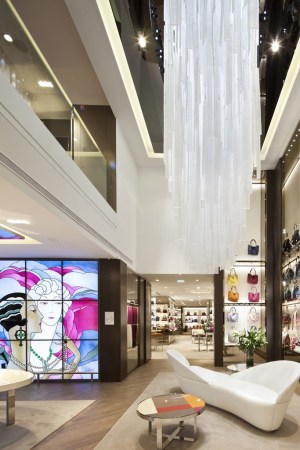 PARIS — One of France’s oldest leather goods purveyors, Lancel tonight will fete 135 years in the business with a bash at its revamped and expanded Champs-Elysées flagship.

Providing the entertainment will be newlyweds Mark Ronson and Joséphine de la Baume, with Sienna Miller and Louise Bourgoin among VIP guests.

The event also pops the cork on the international rollout of a new store concept by Christophe Pillet. Flagships have already opened in Lebanon and Moscow, with a new store due to open in Shanghai in the coming months.

The revamped Champs-Elysées store was conceived as a series of colorful product universes, such as a bag gallery with rows of small leather goods and bags in every color, a luggage area and lobster-hued corner housing the brand’s Daligramme Collection bag range.

Décor features include a stained-glass window inspired by a 1927 illustration from Lancel’s archives; a surrealist-style ceiling fixture hung with a group of upside down bags; and a giant interactive digital book telling the story of the house. There are also seating areas and game tables with old-fashioned board games.

“The idea is to bring back the pleasure of buying, the pleasure of [enjoying] time and space,” Marc Lelandais, Lancel’s president and chief executive officer, explained during a tour of the site. The idea is to keep things playful and innovative, he added, honoring the spirit of the house’s co-founder Angèle Lancel, who liked to surprise in her approach to marketing and design.

“She opened 10 stores in Paris in 1900 — that was absolutely visionary. The stores were not named Lancel & Sons, as would be expected in the day. They were named Au Phoenix, Au Sphinx, A l’Indomptable (The Indomitable) or A l’Incomparable (The Incomparable). She was a very particular character and she imposed herself in a very rigid society at the turn of the century,” Lelandais said.

At a leather-clad counter at the back of the store, dubbed l’Artisan du Cuir, or Leather Artisan, customers can have their initials embossed on goods for free, bring in vintage pieces and order new versions or have small repairs made.

“For me this is what a real leather goods company is all about, this is luxury versus fashion. It’s about bringing the métier back to the customer,” continued Lelandais, who joined the Compagnie Financière Richemont SA-owned firm in 2006.

His focus over the past few years has been on streamlining distribution and ramping up the brand’s international presence. “The [retail] concept was not at all in line with what we wanted to express. My intention was to renovate many stores all over the world and make [the Champs-Elysées flagship] the cherry on the cake at the moment of transition to start rolling out the flagships.”

Besides reinterpreted classics and design collaborations with French personalities, major product launches over the past five years include the Premier Flirt bucket bag, L’Adjani, Le Brigitte Bardot and the Daligramme range.

Lelandais said the house is mulling entering America in around three years time, likely with its own freestanding stores.

“We had to first fix Russia, the Middle East and Asia. I wanted to have priorities and not to go in every direction,” he said. Around 9 percent of customers at the brand’s Champs-Elysées store are American.

The archive-inspired classic, L’Angèle by Lancel, will be among the main launches for spring, along with three limited-edition Daligramme bags in ivory or black lambskin with screen-printed and embossed “Daligramas” symbols.

“We’re launching a monogram, not a traditional monogram with logos but a monogram with sense of emotion, [with a real story behind it],” said Lelandais, referring to the Daligram alphabet monogram created by Salvador Dali for his wife, Gala, which Lancel interpreted in the early Seventies for a unique collector’s bag dedicated to Gala featuring a metal strap inspired by a bicycle chain.

The new Daligramme Collection features re-editions of the bag. “There has to be a good mix between a strong back story and innovation,” said Lelandais.