The all-American brand narrowed losses and revealed a collaboration with the irreverent, buzzy brand.

By David Moin
with contributions from Jean E. Palmieri
on September 5, 2019

Lands’ End, citing “strong progress in strategic initiatives,” narrowed its net loss in the second quarter to $3 million, or 9 cents per diluted share, compared with a loss of $5.3 million, or 16 cents, a year earlier.

Adjusted earnings before interest, taxes, depreciation and amortization were $6.8 million compared with $7.7 million in the year-ago period.

Revenues for the quarter ended Aug. 2 decreased 3.1 percent to $298.3 million, reflecting 110 fewer Lands’ End shops at Sears, which resulted in a net revenue decline from Sears operations of $19.9 million. Excluding the impact from the Delta Air Lines launch last year and Sears operations, revenue would have increased by 5.5 percent.

Same-store sales for company-operated stores in the U.S. increased 7.5 percent.

“We were pleased to have delivered sales and net income above our expectations and adjusted EBITDA at the high end of our range, illustrating the strong progress we are making across our strategic initiatives,” said Jerome S. Griffith, president and chief executive officer.

“Product continued to resonate with consumers as we leverage data analytics to align our key item offerings with consumer demand. We believe our enhancements to our product offering combined with our marketing efforts are yielding overall growth in our customer file, which reflects high-teens growth in new customers. We are also very pleased with our retail expansion strategy with U.S. stores operating at or above expectations.”

Lands’ End also announced some new initiatives including the opening of a buying office in Hong Kong. It’s the first independent buying and sourcing facility in the region for Lands’ End.

And Lands’ End launched a collaboration with buzzy men’s brand, Rowing Blazers, on a limited-edition capsule collection launching this fall. Inspired by Lands’ End’s rich history, and Rowing Blazers’ irreverent, fashion-forward take on classic American style, the unisex capsule will feature rugby shirts in 100 percent cotton and a weekend bag in Lands’ End’s trademark Seagoing Duffle construction. The limited-edition rugby shirts are made in the U.S.

The brand was created in 2017 by Jack Carlson, a coxswain on the U.S. national rowing team, who was inspired by vintage blazers, rugby shirts and other pieces inspired by the sport.

“At Lands’ End we’re known for the classics, and the rugby shirt has been part of our heritage since the Eighties,” Chieh Tsai, chief product officer at Lands’ End, told WWD. “For this collaboration we wanted to riff on one of our iconic pieces. Seeing what Jack Carlson of Rowing Blazers was doing with his ‘classics with a twist’ aesthetic, a blend of streetwear mixed with a colorful preppy vibe seemed like great synergy for both brands.”

The products are available at landsend.com, rowingblazers.com and at the Rowing Blazers Clubhouse store in New York.

Carlson said he grew up wearing Lands’ End. “It helped make the rugby shirt a mainstay of the American wardrobe.”

He said that while Rowing Blazers’ rugbys are inspired by British boarding schools of the 19th century, the Lands’ End collection is centered around a late Eighties/early Nineties aesthetic and includes color-blocked shirts and duffel bags, priced $95 each.

Carlson said Lands’ End will issue 15 or 20 pieces over the next five to six months. “The rugby shirt will be the hero product and then there will be bags, outerwear and casual jackets.” 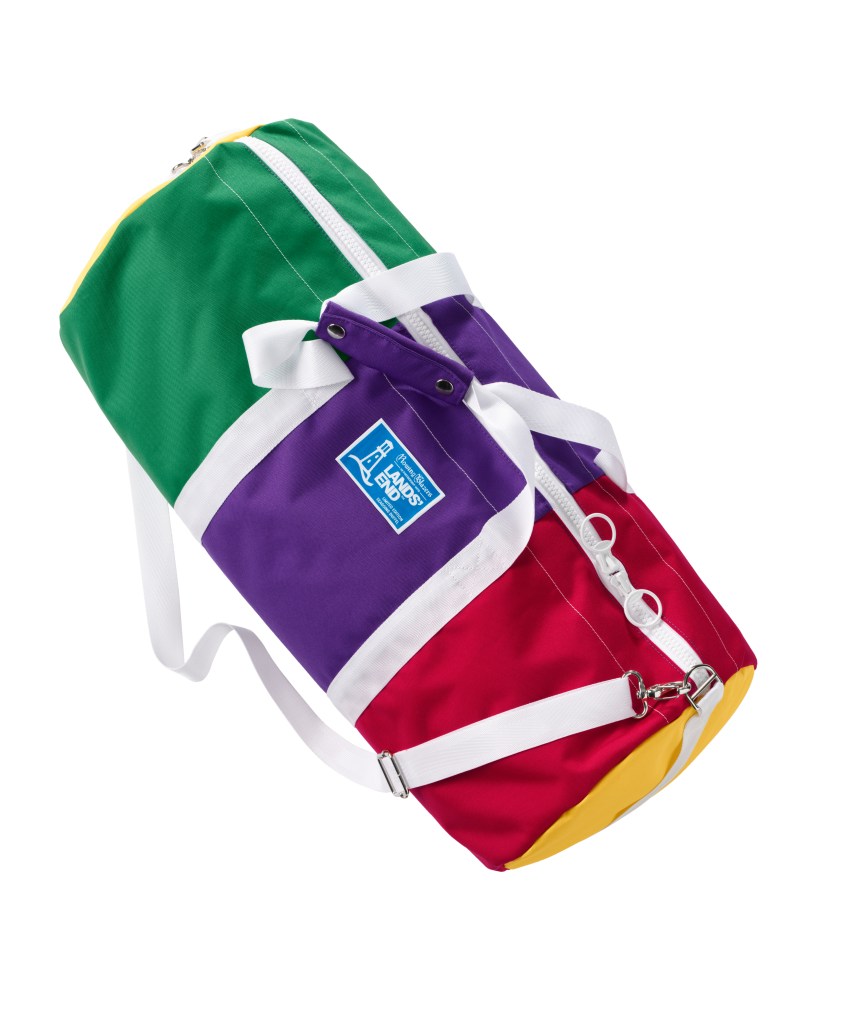