After an up-and-down first quarter, the all-American brand saw business bounce back in April and May.

COVID-19 took a toll on Lands’ End last quarter, though the all-American brand has an advantageous business model for challenging times.

Eighty percent of the business is generated digitally. Products are basic, value-priced and emphasize cotton and comfort. Also, Lands’ End this fall is expanding its presence online by selling on kohls.com, as well as in 150 Kohl’s stores, and introducing third-party labels to landsend.com as well as selling on Amazon.

But there’s no denying the impact of the coronavirus. On Tuesday, the Dodgeville, Wis.-based company reported first-quarter revenues declined 17.3 percent to $217 million, versus $262.4 million in the year-ago period, resulting in a net loss of $20.6 million. In the year-ago period, Lands’ End posted a profit of $6.8 million. The results released were preliminary because the company needs additional time to complete its report for the period ended May 1 due to COVID-19.

“Starting at the beginning of February, we were seeing great trends, double-digit increases, but that lasted until week two of March when business slowed down a lot,” Jerome Griffith, Lands’ End president and chief executive officer, told WWD. “Then business started coming back in April and we had double-digit gains in May. I think business is potentially on the upswing.”

He cited three reasons for an upswing. “A lot of demand is shifting online because people have become more adept on managing what they need on the Internet. There is also some pent-up demand, and everyone wants to feel comfortable working at home,” by dressing casually.

Lands’ End fortuitously last year launched a “Let’s Get Comfy” campaign. According to Griffith, it’s paid off and the company has “leaned” into the strategy this season. He cited healthy sales of knitwear, loungewear, activewear, sleepwear, kids’ and home, specifically basic knits, T-shirts, shorts, polos, pull-on pants, sweatshirts, leggings, as well as sheets and towels. 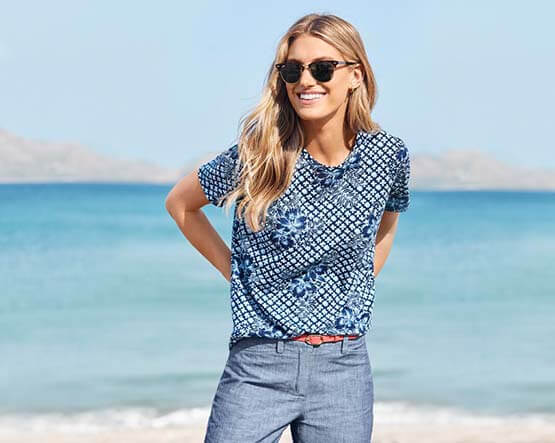 To further lift its web site, Griffith said Lands’ End will introduce on the site about a dozen third-party brands in September or October. They will be complementary to Lands’ End assortment, not competitive, he added. He declined to name the brands, though he said they target a similar demographic as Lands’ End. “Our customer is Gen Z or Baby Boomer, female, working, affluent, with an average household income of $110,000 to $120,000. She has children. She’s frugal, digitally savvy, and looking for the best buy.” New customers to landsend.com skew “a bit younger,” Griffith added. Lands’ End, he said, maintains “a very loyal customer base.”

Lands’ End completed its exit from Sears stores at the end of the fourth quarter of last year. The process, which lasted through several years, resulted in a $300 million reduction in volume. But Griffith said volume is being made up on Amazon, on landsend.com, and through the 26 company-owned stores in the U.S.

Five stores are being opened later this year, including the first few Texas stores. However, in 2021, “We’re taking a pause,” on additional brick-and-mortar openings, Griffith said. In addition, Lands’ End expects to pick up business though its Kohl’s partnership.

Lands’ End has slimmed down spending and page counts in its catalogues to invest more in digital. “The catalogue is still a good traffic driver to the web site,”  Griffith said.

The Outfitters division, which supplies uniforms to major airlines, midsize businesses and schools, successfully completed the remainder of the American Airlines uniform launch totaling $4 million in revenue during the first quarter, with the launch approximating $44 million. For the first quarter, Outfitters’ net revenue declined 26.2 percent, driven by decreased demand due to the coronavirus, which has hit airlines and the travel industry very hard, as well as closing schools.

In other results, adjusted earnings before interest, taxes, depreciation and amortization decreased to a loss of $11.6 million compared to a positive $3 million in the first quarter of fiscal 2019.

In response to the pandemic, the company has been reducing operating expenses and structural costs through furloughs, and temporary tiered salary reductions for executives and corporate staff starting in the first quarter. In the second quarter, 10 percent of the corporate staff has been let go. In addition, inventory receipts for fall and holiday 2020 were substantially reduced, cap-ex was cut in half to $20 million from $40 million, and the asset-based lending facility was increased in March.

“While COVID-19 has created a complex environment on many fronts, we believe that our business model provides the flexibility to mitigate many of the challenges this has created across the industry,” said Griffith. “While we expect the environment to remain difficult, we are excited about the future of Lands’ End.”