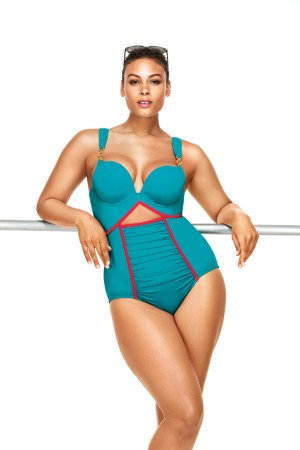 To those “fattist” designers who eschew large sizes, Lane Bryant says “get over it.”

The $1.08 billion women’s specialty chain for sizes 14 to 28 is targeting $2 billion in volume by updating its fashion offering with a growing stable of designer collaborations, bringing beauty products into the mix for the first time, and marketing the message that women of a certain size should feel comfortable about what they’ve got, and even flaunt it.

WWD has learned that Lane Bryant has signed on “Project Runway” winner Christian Siriano as its fourth designer collaboration, following those with Isabel and Ruben Toledo, Lela Rose and Sophie Theallet. Siriano will create a capsule collection that will launch in spring 2016, while the Lela Rose collaboration concludes with the holiday 2015 delivery.

“We are trying to say it’s not all about size,” said Linda Heasley, president and chief executive officer of Lane Bryant. “It’s all about great design, and then we bring in our expertise in fit and fabrications and interpretations.”

WWD has also learned that Lane Bryant is getting serious about the beauty business via the Toledos, who are creating two fragrances — Crystal Honey and Kuba Rose. The fragrances will hit all Lane Bryant stores and lanebryant.com in September. The 779-unit chain will distribute 8 million magalogs with scent strips for the launch. A third fragrance, called Isabel Isabel, is in the works for spring 2016. Lane Bryant once dabbled in the category with a short-lived Cacique fragrance.

Lane Bryant won’t attach its name to the new Toledo fragrances. “I want all women to feel they can wear it. It’s about the designer,” Heasley explained. “We see beauty as a $50 million opportunity. Eventually, we will launch a lip and nail business.

“The mission has never changed,” the ceo added. “Lena Bryant [who founded Lane Bryant in 1900] believed in helping women feel confident and beautiful and always appropriate. All women desire great fashion. We want to breathe new life into this brand. We are looking to double volume in a relatively short period.”

Among other growth maneuvers, Lane Bryant revamped its two-year-old active line, Livi. “It’s now designed for a stop at Starbucks or a workout session,” Heasley said. “We’ve invested in wicking, compression in bottoms for support and sport bras,” Heasley said, as well as in selling space with Livi occupying 10 to 15 percent of Lane Bryant stores, which average 5,000 to 6,000 square feet.

Lane Bryant’s Cacique loungewear label for intimate apparel has accelerated product launches to three to five a year, each involving a new fashion trend or product technology. Cacique, said Heasley, accounts for 30 percent of the Lane Bryant business and “strives to let large-size women feel sexy and beautiful.” The message came out in the current campaign, which has models in lingerie wiggling, describing themselves as “hot,” and professing “I’m no angel,” in an apparent crack at the Victoria’s Secret Angels.

“The jeans weren’t sexy,” Heasley said. “We’ve invested in the denim business in a significant way. The view that large women cannot wear skinny jeans is wrong. We are teaching women to dress into her body, and not away from it.”

In accessories, Lane Bryant is “picking its spots” by largely taking a pass on handbags and going after hosiery. “Our clients can get handbags anywhere,” Heasley said. On the other hand, hosiery is a “significant opportunity.”

She also sees opportunity in layering in some higher-priced goods to an assortment that’s largely moderate to upper moderate. This fall, cashmeres and leathers, priced roughly 30 percent higher than before, will be displayed.

Though Lane Bryant executives don’t dwell on America’s widening waistlines, statistics are in their favor. More than 60 percent of America’s female population is size 12 or larger, and size 20 is the brand’s sweet spot — where the most sales occur. In the last half century, according to published reports, Americans grew an inch taller and became 24 pounds heavier. The average American man today weighs 194 pounds and the average woman weighs 165 pounds.

According to data from The NPD Group, some $12 billion to $14 billion worth of business is lost each year due to not servicing the full-figured customer enough. Plus sizes only accounted for $17.7 billion of the total $116.2 billion women’s apparel market for the 12 months ended September 2014, and grew 1 percent from a year ago. Online, plus sizes generated $4.3 billion in sales last year and are tracking 12 percent ahead this year. Thirty-seven percent of U.S. women say they wear at least one large-size garment, and 68 percent of women in the U.S. are size 12 or above. Other statistics show the plus-size market is tracking 2 percent ahead this year, while the misses market continues to lose ground.

“Designers today are still under the impression that they don’t want to market to the plus-size customer. That’s a mistake,” Marshal Cohen, NPD’s chief industry analyst, said recently.

For the Lane Bryant team, trying to cast a more sophisticated glow over the brand means overcoming a checkered past associated with dowdy merchandise sometimes regarded as “tonnage” — and lots of muumuus.

Recent results suggest that changes at the brand so far haven’t fully clicked in with consumers. In the fiscal year ended July 26, 2014, Lane Bryant had an operating loss of $4.3 million, compared with the loss of $30.1 million the year before.

The chain ranks as the country’s biggest retailer specializing in large sizes, and for retailing overall, only Wal-Mart and Macy’s sell more large-size apparel. Among the other key competitors in the sector are Kohl’s, Old Navy, J.C. Penney, Target, Torrid, Ashley Stewart, Nordstrom, QVC, Victoria’s Secret and Catherines.

“There’s power there that needs to be unlocked,” said Brian Beitler, executive vice president and chief marketing officer for Lane Bryant. “Lane Bryant is still relevant and there’s an incredible heritage, but there’s also some brand baggage that comes with that heritage.”

Lane Bryant is owned by Ascena Retail Group, which acquired the business through its $890 million buyout of Charming Shoppes Inc. in 2012. The deal included Catherines. The $5 billion Ascena also operates the Dress Barn, Maurices and Justice chains, and is acquiring Ann Inc. through a $2.2 billion cash and stock deal, seen closing in the second half of this year and adding more than $2 billion in revenues.

Asked if strategies occurring at Lane Bryant could be applied to Ann, or vice versa, David Jaffe, Ascena’s chairman and ceo, said: “Each brand has its own strategy, though they certainly can learn from each other. We share all of our ideas.”

“The new ownership is committed to putting money into this brand,” Heasley added. “We are trying to be like a start-up. At the same time, we have scale.”