The newly opened flagship in Shanghai is offering 20,000 square feet on its beauty floor, but is hoping to wow shoppers with more than just its impressive size. 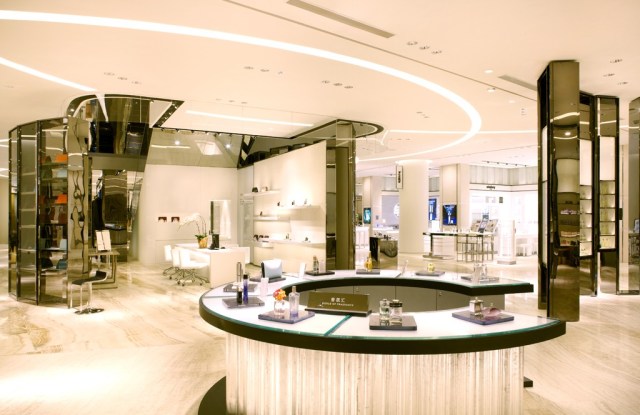 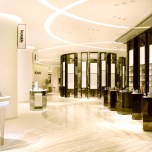 SHANGHAI — The newly opened Lane Crawford flagship in Shanghai is offering 20,000 square feet on its beauty floor, but is hoping to wow shoppers with more than just its impressive size.

The ground-floor beauty department not only features 48 of the world’s most recognizable beauty brands, including La Mer, Dior, La Prairie and Estée Lauder, but has given over 7,000 square feet exclusively to service.

It’s a novel approach for the Shanghai market, which is rich in malls filled to bursting with beauty brand concessions, but has a reputation for service that leaves much to be desired.

“We started in Shanghai with wanting to create an aspirational experience, because I think a lot of the execution in Shanghai it’s not particularly aspirational. It’s not what you would experience if you went to other major cities, such as London or New York, and we decided the town deserved something super special,” Lane Crawford executive director Andrea O’Donnell explained to WWD.

The service areas take what O’Donnell describes as a “360” approach to beauty, with makeup consultations and skin-care analysis all supplied by a staff of dedicated Lane Crawford consultants, free of charge.

There is also a hair salon and nail bar on site, operated by Il Colpo, a well-respected Hong Kong chain with more than 25 years experience in that market — along with a number of celebrity and socialite followers.

The young men on hand at Il Colpo’s hair salon at Lane Crawford certainly have an avant-garde air about them, dressed head to toe in black threads that could have come straight from Rei Kawakubo’s archives.
A basic cut and finish is priced from 380 yuan, or $62 at current exchange, way up to 2,300 yuan, or $377, if the salon’s chief director does the cutting.

The nail bar, which is in a semiopen space outside of the salon, offers OPI manicures for 286 yuan, or $47, which is at the higher end of the price spectrum in Shanghai — though Lane Crawford’s positioning at the eastern end of Huaihai Road, surrounded by high-rise office buildings, may make it a popular lunchtime manicure option for local, well-to-do white-collar workers.

It seems as though everything from the onyx floor, especially transported from the U.K., to “the hub” in the middle of the department, decorated with high-backed armchairs and artworks by local Chinese contemporary artists, is designed to tap into the well-documented aspirational desires of customers in China.

“There is a large amount of cosmetic distribution in Shanghai, but it’s mostly mass, it’s not particularly beautiful or in an aspirational environment and it’s effectively concessions, so you don’t get independent advice on skin-care or makeup products,” O’Donnell said.

“If you are a Guerlain customer and that brand has 10 points of service in Shanghai, we’ve got to make you believe that we can give you something special when you buy Guerlain products from us.”

The “something special” O’Donnell refers to includes the number of free services, including the aforementioned skin-care consultations and makeovers, as well as an arm massage being offered at the La Mer counter, which is normally reserved for VIPs but will be available in Shanghai to any customer who books in advance. All offer independent advice from consultants who are careful to make suggestions, rather than pressure customers into buying a certain product.

Five minutes at the skin-care analysis counter involved a close encounter with a smart scope, a handheld diagnostic tool, originally from Korea, which measures oiliness, fine lines, pigmentation and the appearance of pores.

Another focus for Lane Crawford in putting together the beauty department for its Shanghai flagship was to offer brands that were, until now, either not available or seldom available in the domestic Chinese market.
One example is Atelier Cologne, which is exclusively distributed in Mainland China by Lane Crawford, and Fresh, with its Ancienne antiaging moisturizing cream made by monks in a Czech Republic monastery.

The Fragrance World section of the beauty floor is also noticeably larger than other dedicated perfume counters. In a country with a low (though growing) fragrance penetration among both male and female consumers, the idea is to bring people in and allow them to explore fragrance options more fully than they might be able to in a monolabel store.

“I think education-information for me is the cornerstone of service. Particularly, for Lane Crawford, when we are introducing brands such as L’Atelier and people might not immediately understand what’s so special about them, it’s important we play a role in bringing these brands in and telling their story,” O’Donnell said.

Though Lane Crawford’s experience in Mainland China has included some false starts and restarts, O’Donnell believes the country is ready to embrace the traditional Western model of a department store.

“I think, particularly where China is now, they are growing in confidence and are really looking for their own style; Lane Crawford’s thing has always been about personal style, and so our time is now, really,” she said.

“Department stores are such an entrenched part of retail in the West, but it’s quite different here. The opportunity, the way I see it, is really offering this kind of experience.”