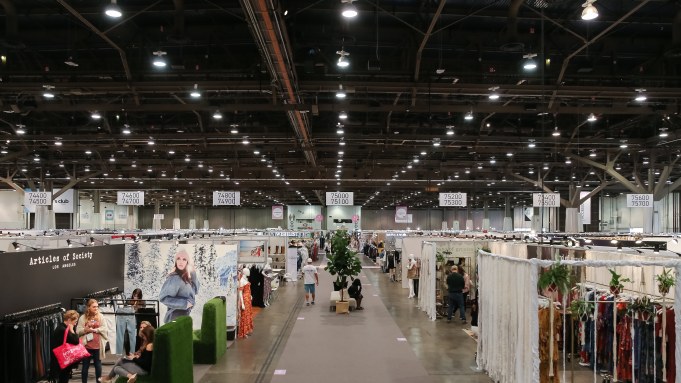 LAS VEGAS — Maybe the term “trade show” is getting to be the equivalent of a four-letter word, much like “mall.”

Meanwhile, there was no getting around the efforts show organizers are now making to get people to stay longer and enjoy the experience. If it sounds familiar, it should — since it’s the same target retailers have been trying to hit for the past few years.

“The fashion industry is evolving considerably,” said Stephen Savage, president of Liberty Fairs and Cabana. “Certainly, in the last five years we’ve seen a lot of moves in retail all the way to how luxury brands are trying to speak to the impulse of consumers wanting things now versus being patient and waiting for them….You’ve seen this shift in luxury with see-now-buy-now. You see with retail the model between digital versus bricks-and-mortar is shifting dramatically – not necessarily ruining business, but shaking things up…. It’s not just the consumer-facing aspects of the industry that need to change; it’s all aspects.”

That being said, Liberty Fairs, Capsule and Agenda – which share two halls at the Sands Expo and Convention Center – banded together to form the Assembly conference. The two-day event featured keynotes from Kith’s Ronnie Fieg and Jaden Smith, among others. The event, given it was on the trade show floor, also opened up the three shows to consumers for the first time.

“We’re currently looking to shift and pivot the traditional model of wholesale to be more about brand awareness [and] marketing as well as the fundamental aspect of the trade show, which is the purchase orders,” Savage said.

Those aren’t meant to be moves to rid the model of the fundamental need to write orders, but the definition is changing and in fact getting democratized, he added.

“I don’t want to diminish the business need the trade shows serve, although I don’t like calling what this is a trade show because I do think it is more of a place of discovery,” Savage said.

“Everybody’s been asking me all day long where we’re going — the trade shows,” said Liberty Fairs founder Sam Ben-Avraham. “And I think you can’t do business without the trade shows. The other option is to go from one showroom to another and it’s not the most efficient way to do business. I see brands who said, ‘OK, we’re not going to do trade shows anymore.’ They left and they realized sitting in the showroom is not a good solution today in a very competitive environment. Yes, there’s a little bit of confusion. Yes, there’s a little bit of unknown. There are a lot of people making changes and your business is not going to be what it used to be, but if you want to really be out there, the trade shows are the only solution.”

Over at the Las Vegas Convention Center, WWDMAGIC made its own changes and signified its interest in beauty with the launch of Glam, consisting of seven Millennial-focused brands on the concourse level with a few more mixed into the floor.

Kelly Helfman — vice president of WWDMAGIC, Pooltradeshow, Fame and Accessories the Show — said the point was to make the offering shoppable for buyers with Glam expected to be back in August and then potentially be its own breakout area on the show floor in 2019.

“We are evolving as WWDMAGIC in many ways,” Helfman said. “I think that we have had to open up our eyes quite a bit and assess the importance of specific omnichannels that are important to our brands and understand them and now start offering more channels for them.”

WWDMAGIC worked for the first time with eBay this season, putting the Internet retailer directly on the show floor with a booth, pitching its services to small businesses looking to go direct.

“People would think that’s not something we would want to do because our whole model is connecting the buyers and the brands. Do we really want to have the brands skip over the buyers and go direct-to-consumer? We’re not scared of it,” Helfman said. “We understand it’s a very important part of their business model. We believe you have to have a wholesale model and you need to have direct-to-consumer.”

A shift is also happening among some of the retail teams being deployed to Vegas, Savage noted. Some larger buying teams have been consolidated in a bid to reduce expenses so, for example, a team of 20 may now be whittled down to five but represent the executives with the greatest buying power, he said. What results is less feet on the trade show floor but roughly the same order volume.

Discovery, as overused as the word has become, is the whole point of trade shows, but difficult given the Vegas geography: 17 total shows ranging from kids and shoes to off-price and contemporary, across four venues on and off the Las Vegas strip.

“It’s too much real estate for what it is. We’re in the age of technology. Nobody needs to hoof it in three shows at three different buildings [on the strip],” contended Los Angeles Apparel founder Dov Charney, whose line was showing at Pool. “The show was fun. There were a lot of hot spots, but you’re asking a lot of people. It used to be a four-day show. Now it’s a three-day show and the third day there was very little traffic. People don’t have the attention span to go through the north hall, south hall, Sands and Mandalay [Bay Convention Center]. It’s too much.”

Charney tempered his statements, despite the critique, saying there was still plenty of business to be had. “The industry never stops. You know why? Because everyone wears clothes, as far as I know.”

Others took the shifting landscape in stride and focused on what was new.

Contemporary sportswear resource Sanctuary, showing at Project, expanded its size range to “inclusive,” meaning up to size 24, beginning with spring. “Nordstrom had asked us to do plus sizes, but we are all about disruption so we insisted that the full range of sizes be sold together under one umbrella, so that two friends of different sizes can shop together, because that is the way women shop,” said chief executive office and cofounder Ken Polanco.

Sanctuary also expanded its denim offering, which is also size-inclusive, for fall, seeing renewed opportunity in the midprice jeans range ($89 to $129 retail) with which it started its business in 1997. To underscore the point, the brand had a social media photo op next to its booth in which customers could take photos and film video talking about what #inclusive meant to them.

“We’re excited to see the new formats and category expansion, particularly the launch of [beauty trade show] Glam at MAGIC as we’re seeing the same desire from our customers to discover and shop for a variety of items all in one place, so having a more expansive trade show is a helpful guide for our buying team as it helps us be inspired by the overall lifestyle of our customer versus just item by item,” said Sarah Israel, women’s buyer at Zulily.

Israel and her team shopped WWDMAGIC, Project Womens and Pool, noting Seventies-inspired wide-leg denim and jumpsuits. The retailer’s team of buyers also picked up on updates to the military trend via embroidery, beading and sequins.

A few brands also managed to turn the heads of Zulily buyers, said Israel, pointing to Sage the Label’s versatile line and boho-inspired brand Free the Roses, which debuted at WWDMAGIC.

HSN buyers had an interesting solution to how to actually sift through and find unique, emerging brands. The retailer began a program last season to mine the Las Vegas Convention Center for interesting lines that could sell product on its “American Dreams” initiative that focuses on showcasing innovative small businesses. Entrepreneurs went before a panel to pitch their product and brand. HSN executives then went back and determined who would show. A dozen were selected in August, with two already given air time. The remaining 10 will appear between now and July.

“The [Las Vegas] show is so large that sometimes you might miss someone who, for example, only had one item and had a smaller booth and was in the back of the convention hall,” said Dara Trujillo, HSN vice president of brand, merchandising and new business development. “What we recognize is that there are so many of those amazing designers and artisans and entrepreneurs that might not be looked at to where if we can cast a broad net, we want to meet you.”

This season is likely to generate more contenders with the program expanded to include the Mandalay Bay Convention Center. The HSN team saw everything from apparel to jewelry and accessories across the shows, including a technology case for a cell phone and patented accessories products, along with innovation on the apparel side, ranging from tummy control leggings to moisture-wicking fabrications.

“To put them [companies] in an environment where we can actually listen, that is so key, especially in our world of storytelling,” Trujillo said. “To do it this way, I feel like we’re giving them a voice that sometimes would go unheard of in the size of the convention center[s].”