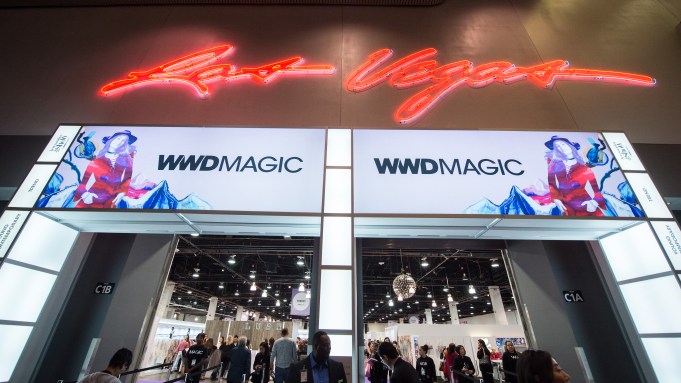 Sometimes all it takes is a little bit of sparkle to gloss over reality.

The glitz of Las Vegas proved just the antidote to take a temporary break from the rough start to the year many retailers have had as buyers and vendors met at the semi-annual event to hunker down, write orders and swap business strategies across nearly 20 shows at the Las Vegas and Mandalay Bay convention centers and Sands Expo Center.

Among the largest booths in the Trend section were juniors staples such as Free People, Miss Me and BB Dakota. One newcomer along the same aisle was Evidnt, a sister line of Los Angeles-based resource J.O.A. The silky men’s wear-inspired tops with grosgrain and D-ring details and fashion-forward denim were contemporary in style, though most pieces were under $100 at retail.

“We’re essentially trying to give people fast fashion like Zara, at wholesale,” said sales manager Arielle Lichtenstein. “Les Masons Simon boutique from Canada came just for denim. It’s been a hard category for a while so I think people like to see something at an opening price point that’s not Levi’s.”

Los Angeles-based shoe brand Seychelles and its younger sister brand BC were using an impressively built-out booth at WWD Magic as a showcase for new takes on its core Seychelles suede booties (Gucci-inspired embroidered florals and sliced leather texturing ranging in price from $56 to $70 wholesale), as well as a new BC “halo” collection that aimed to capture a more fashion-forward, younger customer (pale pink satin chunky-heel loafers inspired by Alexa Chung for $30 to $40 wholesale).

“We have a core customer who loves the vintage L.A.-girly-femme Seychelles DNA, but we’re also trying to evolve with her,” said longtime president Sari Ratsula.

“When ath-leisure became such a trend, we first thought, ‘No, we can’t do that,’ but we figured out a way to make a sneaker our way, and it’s become one of our bestsellers,” she said of a suede slip-on with a pointed toe and ruffle detailing. “It’s the same way we evolved from vintage-style heels into booties.”

Vendors in all sections of WWD Magic filled their booths with immediate spring product, with many opting to not even bring fall product to the show. Everywhere one turned there were white lacy boho tops, off-the-shoulder looks, light floral dresses and colorful straw handbags.

The new product — whether immediates or for fall — was enough to get some buyers eager to put pen to paper and start writing orders.

“There was a general excitement in the air and I felt that at the show, both from the vendors and the attendees,” said Liz Jones, vice president and ready-to-wear divisional merchandise manager at Bloomingdale’s. “It was exciting to see a lot of newness within the fashion trends and a reason for customers to buy, so both customers who own stores buying from wholesalers but also thinking about, ultimately, the customer. It’s exciting when you feel you’re delivering new ideas or newness.”

Jones picked up on the customization trends and “things that make product unique and stand out,” pointing to that on two-tone, acid wash or destruction on denim, along with novelty studs and jewels. Customization could also been seen on shirting with ruffle detailing or outerwear, Jones pointed out.

Others saw it a bit differently but still managed to find what they needed from Vegas.

Fraser Ross, founder of the boutique chain Kitson and the new concept shop Kitross which he bills as selling “soup to nuts, cradle to grave,” reported leaving Vegas early after walking all of the shows.

“I don’t know [about] the future of these shows,” he said. “It’s the ever-shrinking shows. That’s what it is. You go there and think the people that you want to see are going to be there and they’re not. Half the [vendors] are sitting in [their booths]. This is their Oscars. You’ve got three days to do whatever and they’re just sitting in the booth looking at their feet with their back towards the audience. If Donald Trump walked by, they wouldn’t even notice.”

Still, he didn’t leave town without picking up a few new items, with a focus on working with vendors who could ship immediates: more pink items given the energy still surrounding the Women’s March and noted the plethora of T-shirts with creative takes on topical matters. He also picked up a cap Jay Z was photographed wearing with the phrase “retired drug dealer” on it and J Brand men’s denim, among other items.

“It was worth going to see,” Ross admitted. “You can find stuff that you can turn into revenue but you have to go by the more obscure stuff.”

Vendors were generally upbeat, even with some reporting light traffic.

Laura Hall, founder of Los Angeles women’s contemporary brand For Love & Lemons, said the company hit its targets in addition to picking up some new accounts at Project Womens. She also noted buyers appeared to be in generally good spirits and amped up on buying for fall.

“We had one of our best turnouts this year,” Hall said. “I think we saw a lot of foot traffic in part because Project has really grown as a trade show and also because people now have certain expectations from brands that go to Project every year, so we were lucky enough to have a really busy booth this year.”

“Exclusivity has been the trend,” Sage said. “We’ve seen buyers wanting that since we’re so new and so they’ve been wanting to catch us before we get big. So [we’ve offered] zip code exclusivity. It was something we said to one buyer and then we saw the reaction and from there they all seemed to be interested.”

Other vendors reported a steady trickle, as was the case for Rujuta Sheth, founder and designer of her namesake women’s line made from hand-loomed textiles. Sheth noted this season appeared busier than past shows and adjacencies among Capsule, Agenda and Liberty Fairs at the Sands Expo Center certainly helped.

“We never expect a lot of traffic for sales. People don’t buy at this show, but they never have,” said Daniel Lantz, cofounder of accessories firm Graf Lantz, which showed at Capsule. “So we meet them, we go back, we follow up with them, we start working with them on orders — that [strategy] always works pretty well.  So it’s follow-ups.”

The Silver Lake company, known for its bags and other accessories made from merino wool felt, revealed a re-tooling earlier this year that included a raft of new hires, production line efficiencies and a fall line shown at Capsule that reflects new color palettes and more leather.

Affordability, value or whatever other way to spin low cost was a common thread throughout shows, but the real star was the overarching theme of storytelling. If you could tell a winning brand story and connect with buyers, then they could certainly sell that to their customers.

“There’s no shortage of companies selling T-shirt blanks,” said John Lee, director of marketing at Santa Ana, Calif.-based cottonlinksca. “Our brand ambassadors, who share a like-minded philosophy, collaborate with us and that’s what really sets us apart.”

The T-shirt brand debuted at Capsule with an assortment of forms in hemp, cotton modal and french terry for men with a juniors collection set to launch in four to six months. The company wants to stand out from other sellers of blanks via its emphasis on partnering with individuals such as artist and shaper Jeff “Doc” Lausch and ceramist Andrea Luna.

Iconix-owned Danskin got a boost by having celebrity ambassador Jenna Dewan Tatum in its booth Tuesday afternoon. While Dewan Tatum has been sporting Danskin pieces on and off-duty, she has yet to help design the line.

“We’d love to work together on a collaboration — just waiting for the perfect opportunity,” said Iconix’s Carolyn D’Angelo, executive vice president of brand management. “Now that Danskin is evolving more into the fashion-active space it might be the perfect moment.”

Pricing sensitivity persists, but that has to be balanced with quality by a consumer base that’s becoming more and more discerning, many said.

“The general public is price conscious and it’s our mission statement to make the best quality products at the best pricing we can pass along,” said Lulu’s head buyer Brittany Nicholls, whose team shopped WWDMagic and Project.

The Chico, Calif.-based e-tailer’s team of buyers sought to pick up merchandise for May and on, only going after immediates if they felt they could be altered enough for fall. Nicholls’s team gravitated toward pieces with unique embroidery such as roses, star prints on denim, unique lace, metallic knits, polka dot patterns, cold-shoulder tops and boudoir-inspired kimonos.

Katie Nichols, founder of the Athens, Ga.-based Entourage Clothing & Gifts chain of nine boutique stores and an online shop, said she’s projecting growth this year and was eyeing pieces for summer and pre-fall, with her team drawn to the season’s new take on floral — muted color palettes referencing the Nineties— along with midcalf rompers.

Nichols said she’s projecting growth this year and her business is largely insulated from macroeconomic events such as the new administration. Instead, what’s top of mind is delivering the service her customers expect.

“Customer service is at an all-time high,” Nichols said. “People want fast fashion but they also want that high level of customer service.”