Government officials and retail executives pulled the curtains back on the 1.2 million-square-foot terminal Thursday. 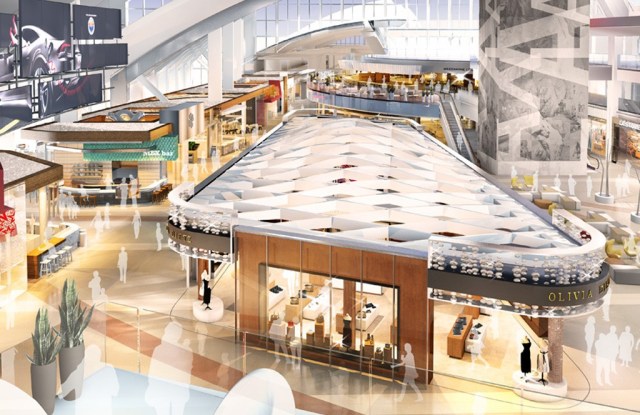 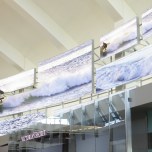 A $1.9 billion piece of a $4.1 billion improvement program at LAX, the largest public works project in Los Angeles’ history, government officials and retail executives pulled the curtains back on the 1.2 million-square-foot terminal Thursday. Although it is not set to fully open for another few months, the terminal, which will have 18 gates and the ability to process 4,500 people per hour, houses 60 restaurant and retail units covering 60,000 square feet, including 22 local concepts, 42 new to LAX and 28 new to airports.

The last time anything truly significant was done to the terminal was when it was built in 1984, according to Los Angeles Mayor Antonio Villaraigosa, who spoke at a press conference in a hall the size of three football fields that will be named after him, and the years since haven’t been good to the terminal. He said he constantly has fielded gripes that, “We had the worst airport in the United States, certainly the worst passenger experience.” Looking at the new terminal now, he exclaimed, “You’re almost at a loss for words when you walk in here.”

Villaraigosa has made it his mission to upgrade LAX and led the charge in 2006 to settle lawsuits that had blocked redevelopment of the airport, which will be one of the main hallmarks of a mayoral tenure due to end on July 1 when Eric Garcetti succeeds him. Villaraigosa has been outspoken that the revamped international terminal tap the best retailers and restaurateurs in Los Angeles. “I want restaurants, I want stores that look like L.A., and we got them.…The local flavor is here,” he said Thursday.

An important change at the new terminal was the placement of the majority of shops and restaurants behind the security checkpoint at Tom Bradley, a virtual retail desert in the past. “To do volume, they need to be in the area where the customer is spending the most time,” said Peter Lowy, co-chief executive officer of Westfield. “People get to the airports two hours early because they have to go through TSA and, depending on the flight, they may have an hour-and-a-half to spare. If you look at retailing at airports around the world, they have totally changed to cater to those issues.”

When it came to leasing the spaces at Tom Bradley, Lowy’s aim was to make sure there was a breadth of merchandise that featured both affordable and luxury, and discretionary and necessary choices, and to give visitors a sense of Los Angeles to intrigue them on their way in or to remember it on their way out. “You have three things to look for: The first is the needs of the traveler who would rely on buying things at the airport. There are luggage issues, personal care items [like for] shaving, newspapers, gum, magazines — the traditional stuff. Then, because there is so much time before getting on the airlines, the next one is food. At Tom Bradley, you will see a lot of flights to Asia, and they leave late at night, between 8 p.m. and midnight. You can certainly outdo the airlines if you give them a very good selection of food. The third one is what I call impulse shopping. They can buy presents if they didn’t get to the [L.A.] stores.”

Fraser Ross, founder of Kitson, has had experience retailing at LAX, where Kitson has been open at Terminal 7, one of United Airlines’ terminals at the airport, since April of last year in a store that Ross estimated ranks among the top retail producers at LAX. “The airport business is a great business to go after. It’s a time-poor, cash-rich customer,” he said. At LAX, he continued, “It is a high-traffic, fast-paced store. It needs almost 24-hour care. When you get that much traffic, you have to be on top of it. You have to be organized and clean. You have to make that a priority.…We sell everything soup to nuts. We watch the price points. We understand that not everyone flies first class.”

It is projected that the new retail and restaurants within Tom Bradley will generate $98 million in annual sales, or roughly $1,600 per square foot a year, which would put them at the highest tier of retail performance in Los Angeles. At the press conference, Michael Lawson, president of the Los Angeles Board of Airport Commissioners, said, “I think that’s going to be low.” DFS has said forecast first full-year sales for its airport-wide duty-free concession would be more than $300 million.

“We’re working to make L.A. the capital of the Pacific Rim. This airport, this pavilion is critical to welcoming these people here,” said Villaraigosa.