Bitter End to American Apparel as Wind Down Accelerates

The company shed about 2,400 people, with the majority of the cuts done in waves Monday. 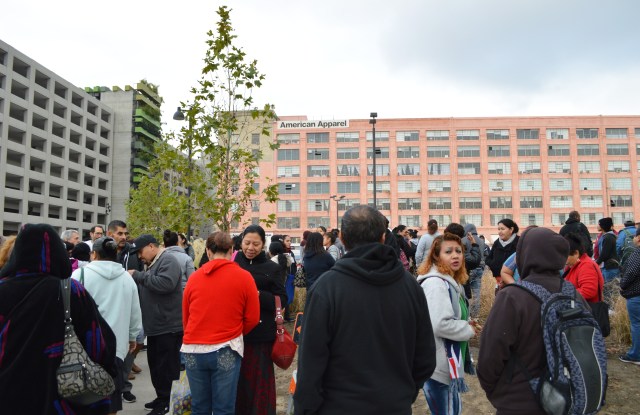 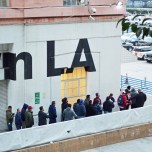 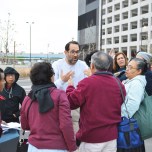 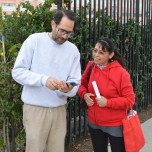 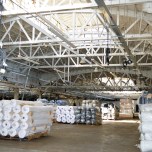 LOS ANGELES — Something very wrong happened at American Apparel in the span of two years.

A global workforce that at one time totaled about 10,000 was whittled down substantially Monday when some 2,400 people were laid off as the company’s wind down gained steam. Another 1,000 positions are still up in the air, a company spokeswoman said.

Workers on Monday began lining up outside, some as early as 5 a.m., at the American Apparel Factory Boutique to pick up their final checks.

A sewer, with the company for nine years, said they were paid up until last week, along with $74 for Monday, and complained about the lack of transparency in the lead up to the cuts.

Another employee, a 20-year factory worker, said he lined up at 5 a.m. for his last check. “They told us no more jobs. That’s it,” he said. “Everybody’s very, very upset. It’s a difficult situation.”

Some workers, who arrived in the morning, were told their checks weren’t ready and to report back later in the day.

An executive speaking on condition of anonymity said some employees were let go Friday, while others walked away from their jobs. The company’s spokeswoman denied any layoffs Friday.

Liquidation at the American Apparel stores is expected to take place over the next 90 to 120 days.

Workers, after receiving their final paperwork, streamed out of the Factory Boutique to the American Apparel entrance on Alameda Street, where they hugged and said good-bye. Some snapped pictures with one another or of the factory. “Adios American Apparel,” said one, while chants of “Dov, Dov, Dov” erupted every now and then as the company’s founder and former chief executive officer stood with them and chatted up his new business, The Los Angeles Apparel Company.

“If anyone has sewing machines, no problem,” he could be heard telling the group gathered there at about 7:30 a.m. Charney said he is capable of hiring dozens, but not the hundreds that were cut.

“Thank you for everything, Dov,” said one worker as she walked away.

Last week’s bankruptcy court approval on multiple deals selling off parts of the business — the largest being a $103 million pact for the intellectual property and some equipment to Gildan Activewear Inc. — was the catalyst for the layoffs.

The California Employment Development Department received warning in November of a possible workforce reduction, totaling 3,457 people, but the retention of those jobs hinged on a possible buyer.

The company said in a statement Monday that it “has been in constant written and verbal communication with employees, letting them know how the sale process has been going all along, and what to expect.” The statement also cited free career mentoring and resource center services, along with a job fair that had been available for the past several weeks.

“Job fair. That’s a very generous term,” said one American Apparel executive. “They’re more get your name up there and meet and greet some people. This is a massive amount of jobs that are lost and there’s not that many jobs out there. Job fairs come with jobs.”

The scene at American Apparel Monday was a contrast to last week’s hearing when attorneys praised each other in working out the sale deals and also coming to a settlement agreement between the company and its unsecured creditors.

Gildan will take American Apparel’s intellectual property and some of the equipment for $88 million, plus another $15 million in wholesale inventory purchase orders. A second, smaller deal with textile firm Broncs Inc. for American Apparel’s Garden Grove facility is expected to see that knit and dye house reopened under the new owner, who is expected to hire back the roughly 300 workers from that plant. The judge overseeing the company’s bankruptcy called the Garden Grove deal “a win-win across the board.” Two deals to sell back the leases to landlords on two stores also received court approval last week.

Ceo Chelsea Grayson attempted to save as many jobs as possible, a source close to the matter said, and it’s possible more beyond Garden Grove could have been retained. When Next Level emerged with a competing offer for parts of the company during the bankruptcy auction last week that offered more money with no jobs, Gildan’s offer changed, the source said.

Gildan spokesman Garry Bell said the company was never interested in buying a going-concern operation and was always focused on the equipment and brand.

The loss of that workforce is a sad end to an all-out brawl that has played out in public for more than two years.

American Apparel suspended Charney in June 2014 and he was officially shown the door that December as a result of what the board cited as a breach of fiduciary duties, misuse of corporate assets and violation of company policy. His reputation by that point had been dogged by allegations of sexual harassment, but the last of those Charney said was in 2011. While American Apparel was weighed down by debt prior to his firing, the company’s own projections, he said, indicate it could have begun servicing that debt.

Charney has alleged both in and out of court his ouster was part of a coup led by former chief financial officer John Luttrell to sell the company. Charney collaborated with hedge fund Standard General to take it back, but the firm later turned its back on him, he said.

Standard General appeared to have been looking for an in on American Apparel since at least March 2014 when the firm’s junior partner Robert Lavan made an introduction via e-mail to Charney, who provided a copy of the communication to WWD.

“We know your company well, believe in your vision and the brand and also understand the dynamics you are going through….We are not vultures and have been trying to buy your equity, but we can’t get in [to] size an amount meaningful to us with current trading volumes,” Lavan’s e-mail said. “Do you have any interest in a private equity infusion? Our view is all you really need is time, which I’m sure the vultures won’t give you, at least not at a good price….”

The courtship appeared to continue with portions of an internal Standard General presentation sent to Charney in April 2014 that outlined the potential in American Apparel calling him “the lifeblood/anchor of the brand.”

The presentation went on to highlight growth of the company’s earnings before interest, taxes, depreciation and amortization of $9 million in 2013 to a projected $65 million in 2015. The firm projected EBITDA of about $74 million for 2016. The slides also praise the company for its “four-wall EBITDA story,” indicating profitability at the store level.

Another e-mail from Lavan, dated June 23, 2014, provides Charney with a draft term sheet on a $20 million secured loan to fund “buying $20 million worth of American Apparel shares as part of your effort to gain control of the company,” the note read.

It’s possible former American Apparel ceo Paula Schneider, who succeeded Charney in late 2014 and took the company through its first bankruptcy, could have seen success with her strategy, which focused on reducing stockkeeping units and then later adding back more fashionable basics, said one executive. Schneider parted ways with the company in October 2016, succeeded by Grayson. The company then filed for its second bankruptcy in November.

“The fact that [Schneider] resigned was a big message of what challenges she was having with the board,” the executive said. “We were feeling we were on the right track. We needed more time and we needed more money. The rhythm was starting to become more clear for everyone of where the strategy needed to go. The board was not patient or willing to do that and having Chelsea [Grayson] being the interim ceo and not being someone who has true apparel experience, it wasn’t an interim position; it was a wind down position. They were not going to support Paula’s business strategy and the amount of cash to get us there.”

Another employee shared a different view, saying none of the tactics seemed to stick after Charney’s firing.

“It only really seemed to get worse and worse,” the employee said. “They kept doing more discounting, more sales. Any time there was a holiday or something like a promotional period, they’d do anything to exploit the sales. It was always a very aggressive ‘We’ve got to get the quantity down on the floor so people can buy.’ I don’t think any of the measures taken were effective.”

Charney attempted to claw his way back in — first with a $550 million offer in late 2014 via an offer from Irving Place Capital and then one last effort through a $300 million bid from Hagan Capital Group and Silver Creek Capital Partners. Both offers were rejected.

“Now they’re on their knees taking $88 million. All of the jobs would have been intact [with the two previous bids] and I have a track record of keeping those jobs in tact for a quarter of a century,” Charney said. “They couldn’t take care of their workers. All they could do is pay [public relations firm] Weber Shandwick to cycle crap out about me.”

If he works fast enough, he believes, there’s opportunity to reclaim his share of the market while competitor Gildan works on transitioning the American Apparel brand into its fold.

His new firm, Los Angeles Apparel Company, had been working in rented space in South Central Los Angeles for a while, but is now in the process of moving into new, expanded digs. Charney didn’t want the facility’s exact location published for competitive reasons, but it’s in Los Angeles. It’s centrally located within steps to amenities for workers such as a drug store, multiple food options, a national coffee chain and grocery store.

The new space, in a more than 100-year-old building that had trains at one time arriving directly at the facility’s backside for deliveries, is next door to Los Angeles Apparel’s distribution center.

Charney, on Saturday, walked the street’s of what will be his new neighborhood. He was affable, excited and curious, popping into the nearby businesses.

Time will tell if he succeeds, but for now he’s rebuilding and looking to clear the record with anyone willing to listen.