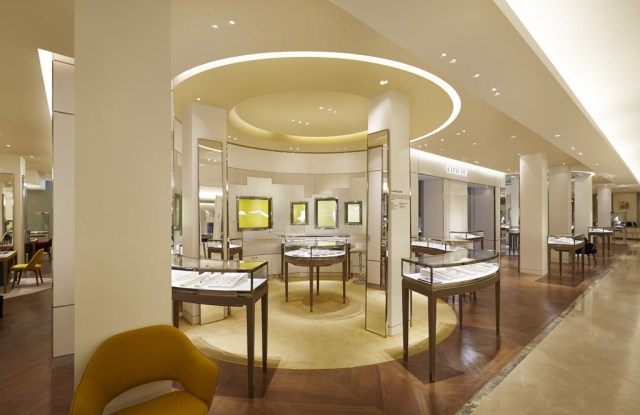 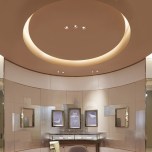 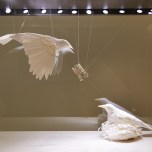 Men who want to put a ring on it have a new destination in Paris: Le Bon Marché has launched private-label bridal jewelry as part of the new fine jewelry department, which bowed at the Left Bank department store in the fall, completing the revamp of its ground-floor accessories department.

Located opposite the store’s year-old watch department in a space previously dedicated to temporary exhibits, the jewelry area features three shops-in-shop — Chaumet, Fred and Pomellato — in addition to 24 brands, with a focus on cutting-edge designers with little or no existing distribution in the French capital.

“We wanted to work on different entry points for jewelry,” said Marie Lassagne, watch, fine and fashion jewelry buyer at Le Bon Marché. “The idea was to present the most avant-garde brands in terms of new ways of wearing jewelry: asymmetric earrings, phalanx rings and items like that.”

Among the unusual pieces offered are architect Zaha Hadid’s geometric mesh rings for Caspita and dramatic winged earrings by Cristina Ortiz, a former designer at Prada, Lanvin and Brioni.

Le Bon Marché is the only retailer in Europe to carry Japanese pearl specialist Tasaki. It offers not only designs from the brand’s creative director Thakoon Panichgul, but also its M/G Tasaki collaboration with Melanie Georgacopoulos, which features sliced pearls and experimental pieces such as deconstructed bibs.

The department is divided into three alcoves with a color-coded decor by artist Mathias Kiss — blue for gemstones, pastel yellow for avant-garde designers and powder pink for the bridal section. The display cases, framed by a geometric frieze in caplain gold leaf, contain delicate white paper bird sculptures by Mathilde Nivet.

The bridal department features classic engagement rings and wedding bands, and a pair that can be worn together, made exclusively for the store by AS29 designer Audrey Savransky. Le Bon Marché plans to tap other rising designers for additional collaborations.

“We see that when women come in to pick a ring, they are attracted by the design and the look,” she noted. “The idea was to do something very classical but to base them on designs which are quite iconic.”

Elsewhere, there is a special focus on designers who work with raw stones, such as Irene Neuwirth and Céline d’Aoust, both of whom are exclusive to Le Bon Marché.

“We place a particular emphasis on materials, and the idea was to show designs based on stones that are off the beaten path and different from the kind of fine gemstones you might find on Place Vendôme,” Lassagne explained.