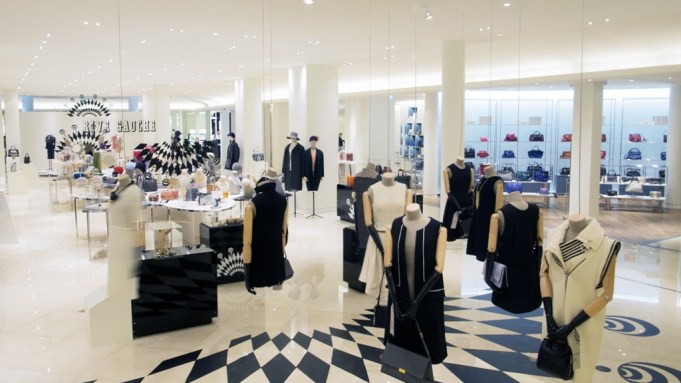 As part of its five-year renovation, launched in 2012, the Paris department store has unveiled revamped accessories and watch departments on its ground floor, with a large number of new brands and exclusives designed to up its fashion quotient.

“Accessories are a flourishing category for the store,” said Fabienne Ruset, accessories director at Le Bon Marché. “This is a key step in our global strategy.”

Spread over close to 13,000 square feet, the recently completed accessories floor has been reorganized to better highlight products thanks to curved, wide aisles and original display units, such as cases containing clear glass vases draped with necklaces in the fashion jewelry section.

The walls made of grooved white wood accentuated with geometric lines of shiny metal provide a unified backdrop throughout, while vintage furniture — such as Tulip chairs and tables by Eero Saarinen — create an atmosphere reminiscent of an elegant private apartment.

“We really wanted to completely revisit the flow of the space. Before, we had a lot of nooks, it was a lot less airy,” said Ruset, adding that the layout was inspired by an aerial view of a French formal garden.

Dominating the main entrance on Rue de Sèvres is a large central aisle devoted to trends that displays leather goods, shoes, hats, jewelry and scarves in a spirit similar to a concept store. To its left lies a semiconcealed circular hat “boudoir” with pale cloud-patterned walls painted by artist Mathias Kiss.

The theme of the trend area will be updated twice a season, with brand representatives periodically coming in to present their wares. For the holiday season, the theme is Baroque ’n’ Roll, to be followed in early 2014 by Soft Architecture and Neo-Mexicanism.

The accessories offer has been whittled down to 128 brands, of which 40 are new to the store. The latter include Azzedine Alaïa, Delvaux and Victoria Beckham in leather goods; Dominic Jones and Lizzie Fortunato in jewelry; Piers Atkinson in millinery, and Wisp and Glen Prince in scarves.

She estimated that exclusives, including products specially developed for Le Bon Marché, make up 30 percent of the accessories lineup. These will be rotated on a seasonal basis.

“We want to offer a selection that you can’t find elsewhere,” she explained. “The idea is to become an essential destination for each product category.”

Sales projections for 2013 have been adjusted to reflect the impact of the partial closure of the accessories floor during its eight-month renovation, but revenues so far this year are up — except for scarves and gloves, which have stagnated due to unusually mild weather this fall.

“We are all aware of the economic situation right now, so footfall is down slightly. But the positive effect of all these renovations is that we have been able to increase our average baskets,” noted Ruset.

This is especially true in the 7,000-square-foot watch department, opened in June in a space that can be directly accessed from the store’s Rue de Babylone entrance. It houses 28 brands with eight shops-in-shop, including new additions Rolex, Breitling, Hublot and Piaget, and La Galerie Imaginaire Horlogère, a space for alternative brands like MB&F, Slyde and Kubik.

Other features include a private lounge and workshop where customers can order a custom-made Camille Fournet leather watchband, have their timepiece repaired or attend presentations hosted by brands.

“We are extremely satisfied with the watch department, which is posting results well beyond our expectations,” said Ruset, noting that the department has sold a number of Rolex and MB&F watches in the range of 65,000 euros to 85,000 euros, or $89,500 to $117,050 at current exchange.

Up next is a fine jewelry section, set to open by fall 2014. “We are working on a very surprising lineup of designers that are extremely exclusive and not that well-known, which will be the strength of our department,” said Ruset.