The company will open a Lord & Taylor pop-up in Manhattan's SoHo as the first step in the reinvention of the department store retailer.

A inkling what what Le Tote would look like at Lord & Taylor.

Lord & Taylor is coming back to Manhattan for the first time since the retailer closed its doors in January. However, it won’t be to the full block on Fifth Avenue between 38th and 39th Streets that Lord & Taylor occupied for 104 years. San Francisco-based fashion rental subscription service Le Tote, which acquired the nameplate from Hudson’s Bay Co. for $75 million, on Dec. 11 will unveil the first brick-and-mortar manifestation of Lord & Taylor since the flagship closed: a 2,500-square-foot pop-up shop at 138 Wooster Street in Manhattan’s SoHo.

While the pop-up is a fraction of the size of the more than 600,000-square-foot former Lord & Taylor flagship — and a subway or taxi ride away — consumers shouldn’t fret too much. Le Tote founder and chief executive officer Rakesh Tondon envisions possibly opening several 25,000-square-foot L&T locations in Manhattan.

Tondon said he’s aware that the shuttering last January of the 11-floor flagship after Lord & Taylor parent Hudson’s Bay Co. sold the building to WeWork, now known as The We Co., for $850 million left many consumers angry, bereft and nostalgic for the retailer, which had struggled in the unsparingly competitive environment. HBC had acquired Lord & Taylor in 2012.

“This is a pretty big task. We’re still trying to grow both sides of the business,” Tondon said, referring to Lord & Taylor and Le Tote in response to a question about the flagship and coworking company. “So, interesting that you ask about WeWork. I was also asked about it by some of our employees. The goal is to have a presence in New York, but I don’t think we need a store as big as 600,000 square feet. If we were to do something it would be a 25,000-square-foot location, and maybe a couple of locations that would cater to people in neighborhoods such as Midtown, the Upper East Side and Upper West Side.” 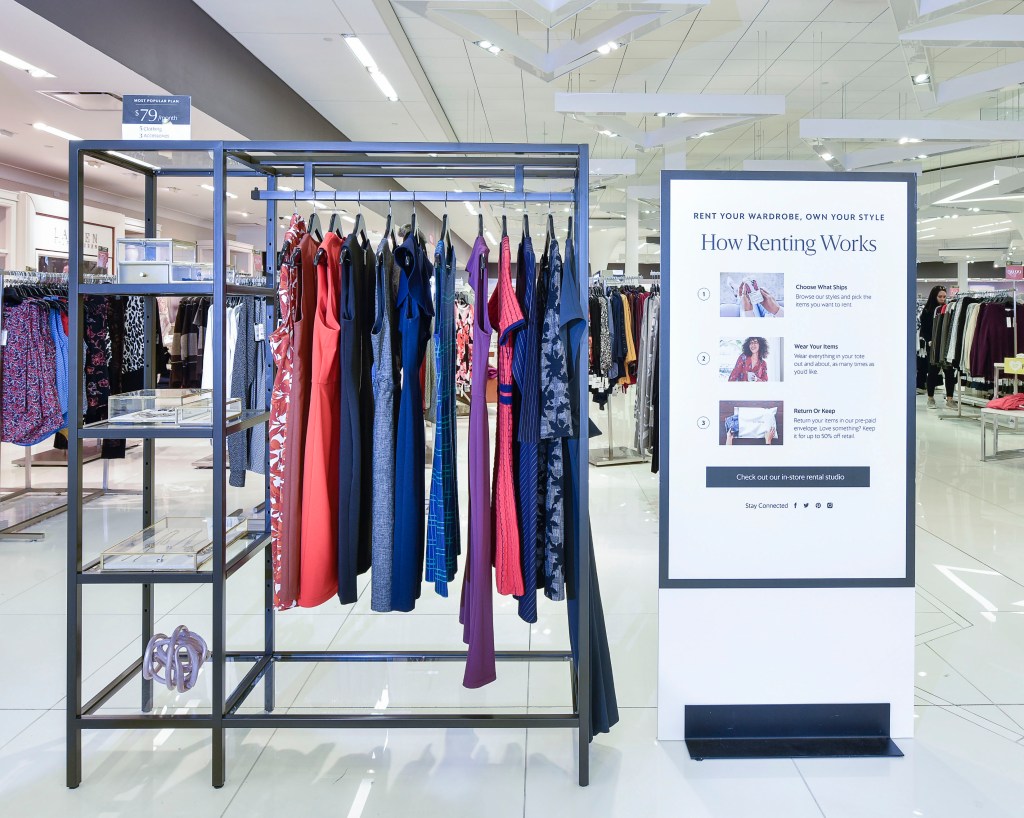 “This would not be a copy of a past prototype,” Tondon stressed. “We want to really look at the demographics and use cases of people going into those stores and [build] them accordingly.”

Le Tote’s reimagining of Lord & Taylor in the form of a pop-up shop where consumers can purchase the retailer’s products and familiarize themselves with Le Tote’s rental service will operate through Christmas Eve.

“When we started working on this transaction with Hudson’s Bay Co., we said that one of the first things we wanted to do is bring Lord & Taylor back to Manhattan,” said Tondon of the pop-up shop. “That’s where it was born, that’s where it grew up, and that’s where it had its flagship store. Then, the flagship store was sold and Lord & Taylor lost its presence in New York, and a lot of loyal customers were pretty upset. Lord & Taylor has a legacy of customers who’ve  been shopping there for 30, 40 or 50 years — and these are all generational shoppers. We wanted to bring that joy back to the city, and what better way than this.

“The goal is to bring our best products that we developed in-house, which is our cashmere and cosmetics and some Christmas and holiday ornaments. In addition, we’re going to have a rental studio as well. People coming in to buy or check out the cashmere can interact and speak to a store associate,” Tondon said. 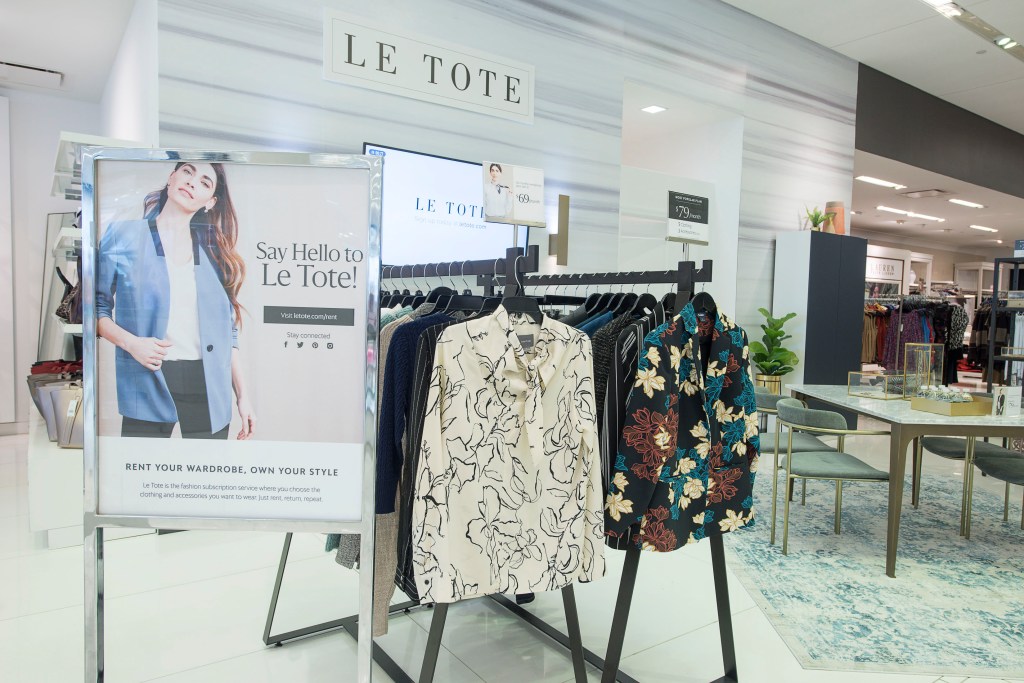 Consumers will be able to buy “a cami, tights — or whatever that product might be. Instead of coming now and then to the store, we can turn [on] the subscription services and make more personal and targeted recommendations in those boxes. We give you the ability to try before you buy in a personalized manner that’s never been done before,” he said.

Many aspects of Le Tote’s subscription services, which are known to be rooted in technology and data analysis, have actually been inspired “by people in our lives,” the ceo said. “My wife has this problem — she can never find black tights. I just want a very basic white T-shirt and black tights. Sometimes I’m that person, too. Not with the tights,” he joked. “We think we’re going to start with basics and lingerie and cosmetics and get into the other things.

“We can create a personalized offering that relies on our data that we’ve developed over the last six years. Some of that is actually being worked on right now with Lord & Taylor. We’re actually going to be our first customer.”

There will be other “customers” as well. “You should firmly expect to see some of the brands that we’ll be powering in Q2 and Q3. Initially, we’ll do tests in a couple of Lord & Taylor stores — I want to give all Lord & Taylor customers in the stores or online the opportunity to experience Le Tote.

“We’re actually having conversations with other brands and retailers that want to offer rental or subscription services that Le Tote will be powering,” Tondon said, adding that the scenario could be similar to ThredUp’s deal with Macy’s, where the resale apparel site offers its wares at in-store shops within Macy’s locations. “Trying that definitely has some ramifications on the brand and the brand perception. We’re trying to say there are thousands of customers coming in quarterly for the same types of products. Can we give them a better experience, and if we can, what does that look like? We’re powering to create more loyalty.”

Under the terms of the deal, HBC agreed for three years to maintain responsibility for the rents owed by Lord & Taylor at the locations operated by Le Tote. Starting in 2021, HBC and Le Tote can reassess the Lord & Taylor store network, meaning that HBC could convert some locations to different uses. However, redeveloping properties is a long and complicated process, so stores would stay open for a number of years after 2021. HBC has hired a team of professionals for any redevelopment. For any recaptured stores, HBC retains long-term rent responsibility, risk and costs for redevelopment.

HBC could potentially tap into Le Tote’s technology to develop rental businesses for Saks Fifth Avenue in the U.S. and the Hudson’s Bay department stores in Canada. However, Tondon said, “Le Tote is not going to be in Saks anytime soon, but there’s a number of things we’re working on, different services that some other brands and retailers will be offering as ‘powered by Le Tote.’

“The reason we wanted to do this deal is because this is what our customer has been demanding,” said Tondon. “They aren’t just shopping online and renting online. They are going into stores. Our traditional business is the rental business, but we want to offer the customer the ability to buy or rent or do both online or in-store.”

The Lord & Taylor flagship real estate sale by Hudson’s Bay Co. was part of the Canadian giant’s efforts to improve profitability, which has included closing Home Outfitters in Canada, closing up to 20 Saks Off Fifth stores in the U.S. as part of “a fleet review” of Saks Off Fifth that could result in its sale. HBC last year sold Gilt Groupe to Rue La La, and unloaded a majority interest in its European retail operations to Signa Holdings, which owns the Karstadt department store chain in Germany, and a 50 percent stake in its European real estate. The sale to Signa led to a merger of Kaufhof and Karstadt in Germany. 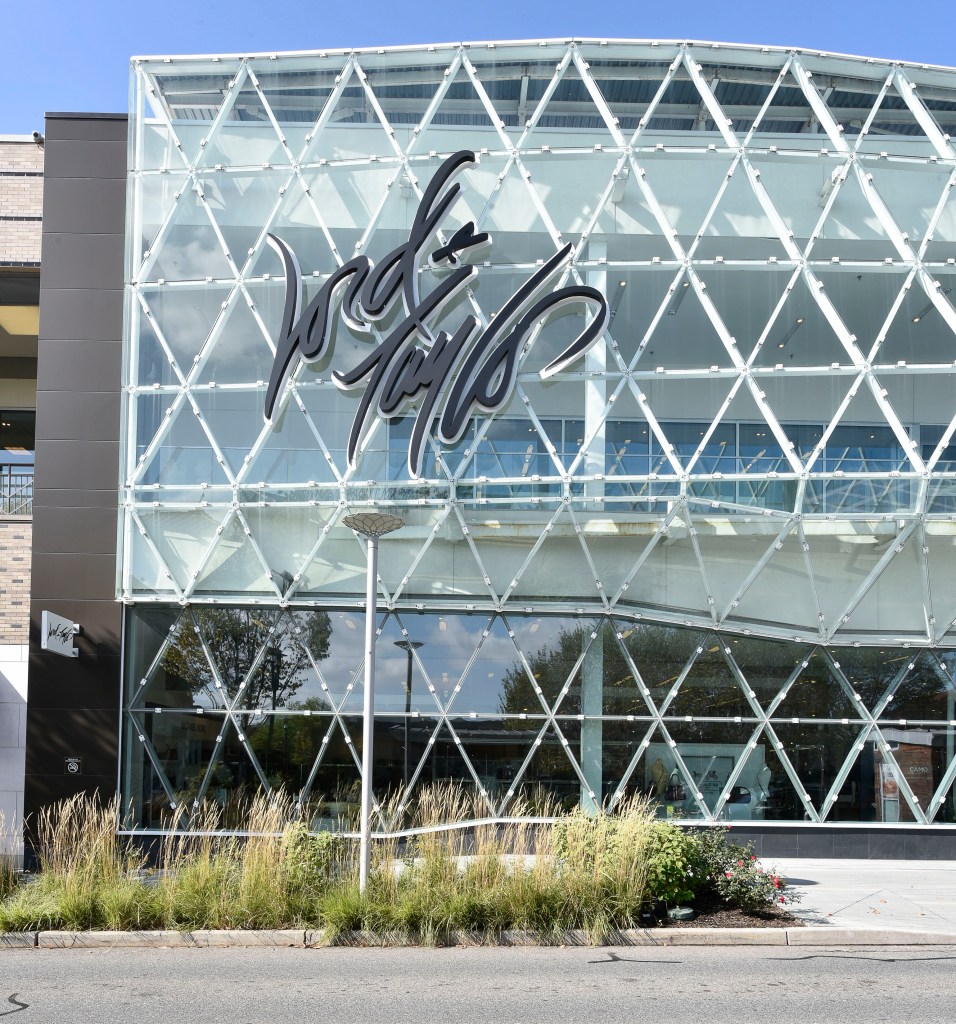 The We Co., seems to have a similar case of eyes too big for its stomach as Hudson’s Bay Co. Since the Canadian giant in 2017 agreed to sell the Lord & Taylor flagship to the then-WeWork, the coworking start-up has unraveled, scuttling a planned initial public offering and securing a multibillion-dollar bailout from SoftBank, after reportedly being in danger of running out of money after the failed IPO.

The transaction didn’t work out the way Hudson’s Bay Co. had hoped, either. When Hudson’s Bay agreed to sell the Lord & Taylor flagship to WeWork, the idea was the building would serve, at least in part, as the startup’s headquarters. The deal closed last February, with Hudson’s Bay preserving $125 million of preferred equity interest in the building.

In spite of its shaky financial straits, The We Co. has begun redeveloping the former Lord & Taylor flagship to the tune of $438 million. When finished, the building will have two floors of retail space and a food hall in the basement, with nine floors of office space for a total net rentable area of about 680,493 square feet.

Asked whether he had the Barneys New York flagship that will be closing on Madison Avenue in his sights for one of the possible 25,000-square-foot Lord & Taylor units, Tondon said, “Not for the time being. Barneys — the location is great, and the real estate is really valuable, but it’s far more expensive than we feel we should be spending today.”

Amazon’s Fakes Problem Could Land It on ‘Notorious’ List

Xupes Banks on Physical Retail, Hard Luxury to Become the ‘Net-a-porter of Pre-owned’