Lebanese Designers Count the Damage of Massive Blast in Beirut

Designers including Elie Saab and Rabih Kayrouz reported no victims from the explosion, which destroyed their headquarters.

By Joelle Diderich
with contributions from Samantha Conti
on August 5, 2020

A drone picture shows the scene of an explosion at the seaport of Beirut.

PARIS — Lebanese designers were left picking up the pieces on Wednesday after a massive warehouse explosion in the port of Beirut sent a shockwave across the capital, killing at least 100 people and injuring nearly 4,000, according to news reports.

Maison Rabih Kayrouz posted video footage on Instagram Stories of its headquarters, located in the elegant 19th-century Dagher Palace in the Gemmayze district of Beirut, reduced to rubble by the blast.

Only a single mannequin in a white dress is left standing in the space, littered with concrete and glass debris, as sirens can be heard wailing outside.

“Why why why !!!!!! F— who ever did that !!!!” reads a caption at the start of the video. A worker is shown picking up clothes and placing them on a rack. “Our courageous team trying to save…what could be saved!!!” the caption reads. It ends with a view of the building from the street, and a close-up of a blood-spattered shirt.

A spokeswoman for the brand said Kayrouz and his team were all safe. The designer moved into the new venue, which combines his atelier, couture salon and ready-to-wear boutique, on his label’s 20th anniversary last year.

The Elie Saab building in Beirut’s Central District has also been devastated by the explosion, although the designer and his teams escaped unscathed, a spokeswoman for the brand said. “Everybody was at the office when it happened,” she said of the blast, which ripped through the district at around 6 p.m. local time on Tuesday.

“Everybody is in a state of shock from what happened, but it’s more for the country than for the material damage,” she added. “This is really a disaster.”

The explosion hit the country in the midst of a profound economic and political crisis that has caused food prices to soar and the currency to plummet. After a series of protests last year against a government that critics say is endemically corrupt, Lebanon went into lockdown in a bid to stop the spread of COVID-19.

French-language Lebanese daily newspaper L’Orient-Le Jour printed a picture of the city in ruins under the headline: “The Apocalypse.”

Zuhair Murad is another designer whose headquarters were gutted by the blast, which officials have blamed on a cache of 2,750 tons of ammonium nitrate stored at the port. The Vogue Arabia web site posted an image of the building, also located in the Gemmayzeh district, an area known for its fashionable bars and restaurants.

A spokeswoman for Murad said nobody was injured. Women’s wear designer Roni Helou, known for his sustainable fashion, suffered extensive property damage to his workshop and home in the Mar Mikhael area, which faces the port. “The team and I are safe, but the atelier is destroyed,” he reported.

“The tragedy that occurred yesterday has left the entire city in complete shock. I am still struggling to process what happened. My anger is directed toward our government who is proving once again its complete and utter incompetence. Because of their negligence, the majority of Beirut’s citizens — including myself — have lost their lives’ work, and restarting in such unpredictable circumstances seems very unlikely,” Helou added.

“I have no words. We first felt the ground shake as though it were an earthquake. And then there was a huge bang, and no one knew what to think. Everyone was at a loss for words. Luckily, I was out of office. The location of our office and store is right across from the explosion,” she said.

“We have nothing left. The store is completely broken down and the office is destroyed. Our sales manager was injured, but luckily survived. Everything we have worked on has been torn apart,” the shoe designer added.

“Following today’s unforeseen circumstances, ABC Malls and department stores will be closed temporarily. Our prayers are with all victims and their families. #PrayforLebanon,” the shopping center said in a post on its Facebook page. 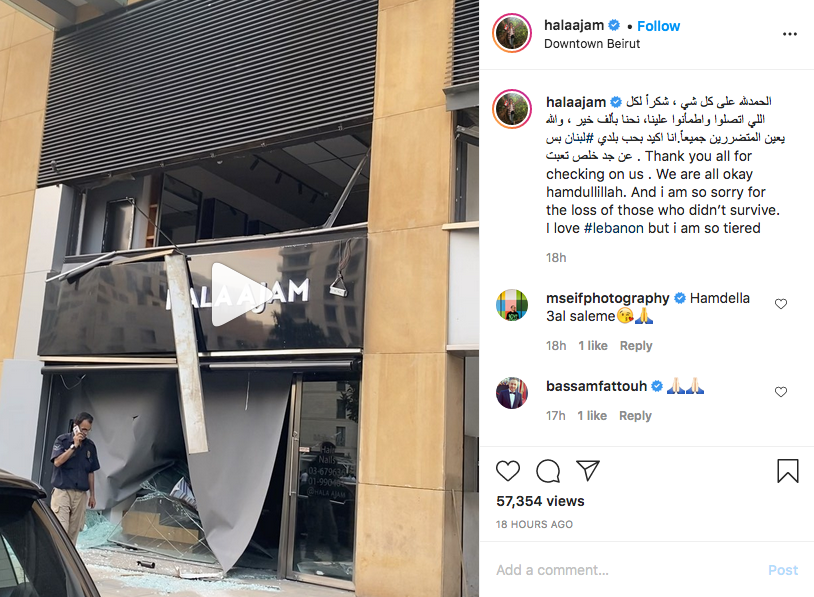 The Hala Ajam store after the blast in Beirut.  Hala Ajam/Instagram

Makeup artist Hala Ajam posted footage on Instagram of her store, with its windows blown out. “We are all OK,” she said. “And I am so sorry for the loss of those who didn’t survive. I love #lebanon but I am so tired.”

Georges Hobeika, whose headquarters are located a little further away from the center in the surburb of Sin el-Fil, managed to escape unscathed. “The atelier and team are safe and sound. We are all devastated,” a spokesman said.