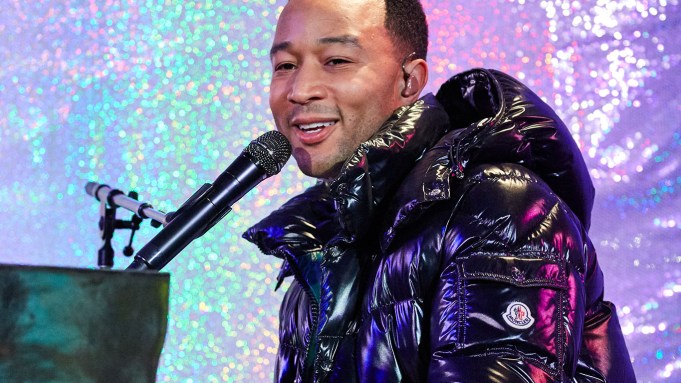 For John Legend, Bloomingdale’s seems like familiar territory. He performed for the unveiling of the store’s holiday windows years ago and had a return engagement Friday on a windy, cold night before a huge crowd packing the police-barricaded stretch along Lexington Avenue.

“I love the holiday season in New York,” Legend said. “I love the decorations. I love the chilly weather. I love wearing these cool winter coats,” like the glossy long black Moncler down number he wore during his performance, covering up his Paul Smith tuxedo.

“I love the idea of closing down a block in New York City on a Friday night, but I bet there are a lot of people upset with me.”

Legend sang six songs from his 2018 Christmas album “A Legendary Christmas,” which he expanded earlier this month with four additional tracks for a deluxe version. “It’s a mix of very classic tunes, standards, some Motown and some original songs.”

During his medley, Legend got nostalgic about his pre-stardom days when he lived in Manhattan’s East Village and rode the number 6 subway to 59th Street on his way to work, exiting the subway right by Bloomingdale’s for his first corporate job. “I was a management consultant. That’s very sexy work — lots of spread sheets and PowerPoint presentations — just what you’d expect from an R&B singer.” Back then, he roomed with a cousin of Kanye West and played gigs at clubs like The Knitting Factory and SOBs. “Kanye came to the shows and we started working together.”

It wasn’t a quick stop for Legend who performed for a half hour, took interviews and hung out at the Studio 59 bar on Bloomingdale’s second floor for Champagne toasts.

People Magazine’s “sexiest man alive” for 2019, aside from being a singer, songwriter and pianist, is an entrepreneur and a natural for a men’s fashion deal. “I would do one,” Legend acknowledged when asked about the possibility. “There are no current deals. Right now I am focused on other things. I have a wine company. It’s called LVE. The wine is from Napa and France.”

Nor does he have a Christmas wish. “I don’t wish for anything. I have everything I could ever want.”

The National Children’s Chorus was the warmup act, and following Legend’s performance, six astronauts marched to the stage as “Also Sprach Zarathustra” played (popularized by the movie “2001: A Space Odyssey”) and the windows, an homage to the lunar landing 50 years ago, were unveiled, depicting flying saucers, visions of the galaxy,  robotic arms playing instruments on a distant planet, and an interactive voice-controlled Google window in a domestic holiday setting. Then hundreds from outside filed into the store for selfies with the astronauts, and holiday “activations” on the selling floors including a Ralph Lauren “winter wonderland,” a Baileys Treat Bar, an “Out of the World” virtual reality setup, an arcade with video space games, and an opportunity to pose inside an intergalactic snow globe.

“We have 15 activations across our selling floors,” said Tony Spring, Bloomingdale’s chairman and chief executive officer, adding that the store’s holiday campaign and new seasonal in-store experiences embracing space exploration represent “a wink to the past and a reflection of Bloomingdale’s commitment to the future.”