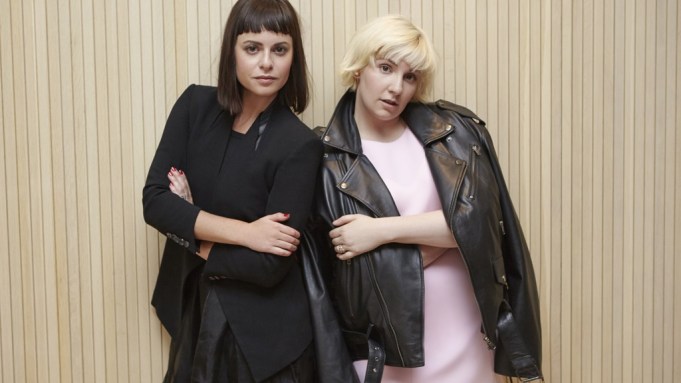 The creator of the hit TV series “Girls,” Dunham, whose first book “Not That Kind of Girl,” comes out on Tuesday, will exclusively wear Nasty Gal clothing for her entire book tour, which includes 15 stops in cities such as New York, Los Angeles and Chicago.

Quite the duo — Amoruso herself wrapped up a nationwide book tour for her best-selling “GirlBoss” this summer — the two friends met for fittings last month at Amoruso’s L.A. home.

“We both travel a lot and we text a lot, [but we] don’t get the opportunity to hang out a lot. It was a hybrid fitting-hangout-sandwich attack,” 28-year-old Dunham said.

“There were sandwiches, a little Champagne, a lot of clothes, a seamstress and Donna Summer [Amoruso’s dog],” Amoruso added. “It was like a five-, six-hour endeavor.”

For an event Thursday night in Boston, Dunham was to wear a full-length, long-sleeve, black-and-white floral dress with a black Jeffrey Campbell tread-sole platform shoe. She described it as “really Studio 54” and something that a cool, liberal woman from the Seventies might wear. It retails on nastygal.com for $78.

Dunham stressed that the fitting was not about the seamstress coming and “tugging at the waist” and making sure she looked long and lean (“Although she did a good job. Waists are important,” she said).

Instead, the actress, filmmaker and author gravitated toward clothes that were evocative and irreverent — like a vintage T that reads, “I Like It In My Ear.”

“It’s witty but refined, [paired] with a black pleated leatherette skirt. It tones down the T-shirt. Knowing me, I would have put it with cutoffs, but Sophia sufficiently classed me up,” Dunham said.

All of the looks have a personality. One — comprising a leather skirt, a Bart Simpson T and a leopard coat — is what Dunham called the “Waiting Around Max Fish to Get Laid” look, while another — a black Neoprene dress and platform Mary Janes — is more “I’m at a Book Party Putting Finger Food in My Purse.”

“There are some characters emerging in the outfits,” Dunham said, noting that she also loved a white biker jacket, because it was very “Divorcée Getting Her Groove Back.”

A shoppable look book based on the pieces Dunham and Amoruso selected for the book tour went live on nastygal.com on Thursday. The majority of the looks will be on sale upon launch, with several items rolling out later this fall.

Then there’s the corresponding tote bag.

“We designed the most beautiful tote,” Dunham said.

“It has a 69 in the back, really big,” Amoruso interjected. Fortunately, the front is less suggestive and has the title of the book emblazoned on it in white letters. You can have it for $15.

Now that she has her outfits, there is the issue of hair and makeup. But Dunham said she wasn’t ready to travel with hair and makeup stylists for every appearance because she doesn’t have the patience to sit and wait. Fortunately, she got a book, “The Daily Face” by Annamarie Tendler, and she’s been practicing so she “won’t look like a monster in photographs.”

“I don’t mean to give anyone more fodder,” Dunham said. “But I’m going to take it seriously.”

In tandem with the tour, Dunham will host five roundtables in partnership with organizations that promote literacy and learning. With sister Grace Dunham, she held the first one Thursday with several women between the ages of 18 and 21. They spoke to the group about writing, what it means to them and did a writing exercise.

“I did a hometown event last night, but it’s all about going across the country and meeting girls in different cities,” Dunham said. Don’t worry, she added, “Gentlemen are welcome, too. To me, Boston is my first away game, and it’s an exciting way to present the collaboration with Sophia.”