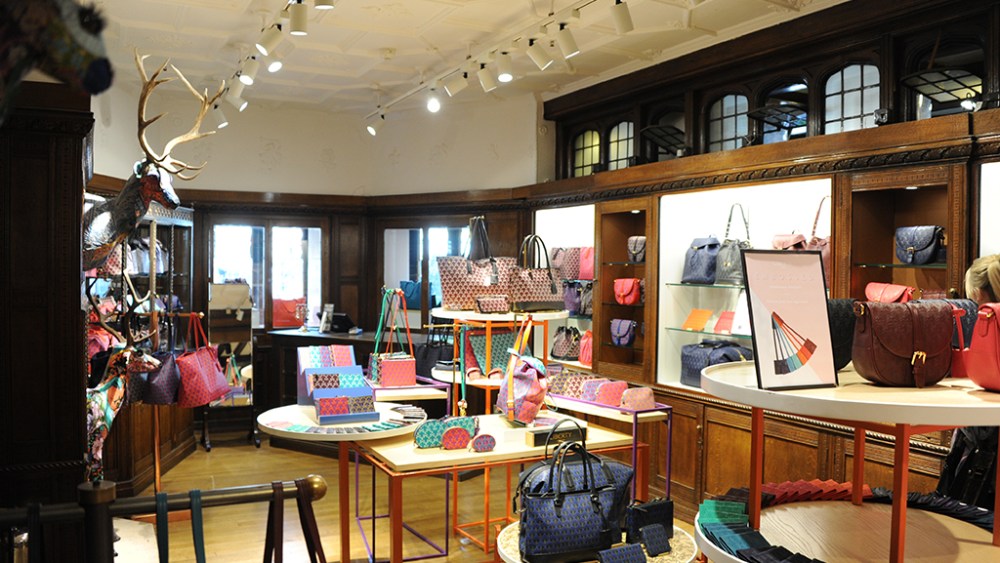 LONDON — Liberty London is grooming itself for an initial public offering planned for 2018, and relying on its particular brand of British flower power to attract investors.

The London specialty store, best-known for its Tudor Revival flagship off Regent Street — built from the timbers of two British ships — and an archive packed with floral patterns, is rapidly building its own label business and brand collaborations to pump up business in the run-up to a planned IPO.

Playing a critical role will be the Liberty London accessories collection, which launched internationally this year, and will be carried at stores including Neiman Marcus and Bloomingdale’s; the Flowers of Liberty collection of homeware, which has a pop-up running at Nordstrom until August 2; a print gallery planned for the store’s third floor, and a series of designer collaborations.

The brand, which is marking its 140th anniversary in September, will also be focusing increasingly on its fabric business, and on building up the in-house product on its e-commerce site, which will be upgraded and re-launched this fall.

Marco Capello, the store’s executive chairman and the managing partner of BlueGem Capital Partners, Liberty’s private equity owner, said the goal of a stock market listing is not to raise extra funds — “We can finance the company,” he said — but rather to ensure Liberty remains an independent British brand.

Following the stock market listing, “the company will continue to grow, the fund will exit, and there will be no uncertainty for people who work in Liberty. They’re not going to get a new owner. I will stay on as chairman, and the people who work here will know that the management will not change,” Capello said during an interview alongside Ed Burstell, Liberty’s managing director.

BlueGem purchased Liberty in 2010 in a deal worth 32 million pounds, or $50 million. In late 2013, the store welcomed new, minority, long-term investors, a consortium of “prominent and well-established” international families from Europe and the Middle East.

Sales are on the rise: Last year the store posted revenue of 133 million pounds, or $219.5 million, and an after-tax profit of 9 million pounds, or $14.9 million. All figures have been converted at average exchange rates for the periods to which they refer.

Revenues are growing in the double digits, according to Capello, while the company is targeting more than 20 percent compound growth in earnings before interest, taxes, depreciation and amortization ahead of the IPO. Current EBITDA is 21 million pounds, or $34.7 million, and Capello said he would eventually like to see “at least half” of that come from sales of Liberty fabrics and own brand products.

In the past, and before the arrival of Capello and Burstell, Liberty was quoted on the London Stock Exchange under its former owner, MWB Group. The latter company, which specialized in property, was placed into administration, the U.K. equivalent of Chapter 11, in 2012.

Like most purveyors of high-end goods, Capello and Burstell believe Liberty’s own brand products are the key to top- and bottom-line growth, and none more so than the Liberty London-branded accessories, which launched in the U.K. in 2013.

The accessories, made from waxed cotton canvas and leather, are covered with Iphis, a reworked Art Nouveau print from the retailer’s archive, which is home to more than 40,000 fabric designs.

In the fall, Liberty will introduce embossed leather items to the line and plans to build up the number of wholesale accounts – within reason.

“We are selecting very few stores, and we will not sell to more than one store per city. The one thing I’ve learnt over the years is how not to ruin a brand,” said Capello. “We’ll give the stores an exclusive period, and in exchange, they’re going to provide us with a location that is appropriate for us and for the designs, so that it feels limited.”

Capello said the Liberty London collection is currently “outselling everything else” at Liberty. “It sells more than four times more per square foot than the store, and two times more than the [ground] floor.”

As part of its push for quality, Capello said the company chose to manufacture the accessories collection in Europe rather than China, and accept a smaller profit margin.

The store plans to introduce new colors for fall and a seasonal patchwork collection. It will also unveil laser-cut leather next year. Come fall, Liberty will offer a monogramming service — much like higher-priced brands such as Louis Vuitton and Goyard — while enamel jewelry bearing the Iphis print will launch for Christmas.

From September, Jose Vaz Guedes, the sales and strategy consultant who has worked with brands including Moschino, Jimmy Choo, Vionnet and currently MSGM, will begin working with the store on the Liberty London collection.

Meanwhile, another of the store’s subbrands, Flowers of Liberty, has become the latest label to take part in Pop-In at Nordstrom. The made-in-England collection features kitchenware, food, gifts and accessories covered or packaged in prints from the archive.

Burstell said he is also planning “an explosion of printed product” for the new print gallery on the London flagship’s third floor, which will house all of Liberty’s in-house designed product, including the store’s loungewear. The latter collection, made from ultrahigh-quality Ethiopian cotton in Liberty prints, will also sell at Saks Fifth Avenue.

“In the past, these collaborations have been commercially and editorially successful, so for the first time we’re actually approaching this as a viable business plan. Before, it was almost by accident that they became successful,” said Burstell.

In another strategic move, Burstell plans to tweak Liberty’s women’s designer ready-to-wear offer. “There are areas of the business that still owe us business. Ladies’ ready-to-wear is not performing in line with the rest of the store,” he said, adding that the focus going forward will be on “discovering new brands and bringing them to market.”

With that in mind, and instead of staging fall press days, Liberty released a digital film featuring British and international brands that will be exclusive to the store, including Tomorrowland, Needle & Thread, Norse Projects, Paskal and Rachel Comey.

Liberty is also collaborating with the London College of Fashion on a series of awards for undergraduates, known as the Liberty Fashion Matters Awards. The aim is to discover four future designers and offer 5,000 pounds, or $7,803, to each winner to help fund their final end-of-year projects.

While the company may be expanding rapidly, there are no plans to open replica Liberty stores in the U.K. or even in the rest of the world. The mock-Tudor building, with its flower stall facing Great Marlborough Street, wood-paneled walls, vast central atrium, and ground-floor scarf hall, will remain a one-off. That said, Capello and Burstell are mulling smaller-format Liberty London or Flowers of Liberty units that would span a maximum of 3,000 square feet, and be adapted to specific locations and retail environments.