Liberty Sails Ahead With Re-branding, Refurbishment Despite COVID-19 Challenges

The store has refreshed its logo and begun restoring the flagship, with its 1,550 antique stained-glass windows.

LONDON — COVID-19 aside, 2020 was always going to be a big year for Liberty, which is marking 145 years in business, refurbishing its unique Tudor Revival flagship near Regent Street, re-branding and relaunching its e-commerce site.

As England’s fashion and luxury retailers prepare to reopen on June 15, Liberty will be doing so with a refreshed logo and a web site meant to appeal to local and international consumers alike.

The new, more streamlined logo was inspired by the Liberty sign that’s been swinging above the store’s Great Marlborough Street flower stall entrance since 1925. The sign has hung above that door, which is a short walk from Oxford Circus, since the store opened on the site that year.

Liberty worked with the design studio Pentagram on the re-branding. The firm redrew the Liberty logo using the sign’s original typeface, and designed it to be flexible, repeatable, layer-able and bendable to cover packaging, campaigns and transform into its own repeat print.

The new Liberty branding also has a period — or “full stop,” as the Brits say — at the end of the name. 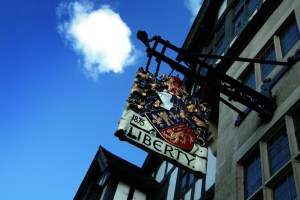 The Liberty sign from 1925 that swings outside the store.  Photo courtesy of Liberty

Harry Pearce, a partner at Pentagram who led the project, described the process of re-branding as one of archaeology, craft and refinement. He called the lettering on the 1925 sign a “beautiful gift” from the past.

“We redrew and refined all the curves to give it the elegance that the brand deserves. There’s a hidden femininity in it. It’s a little less chubby than it was, and the full stop at the end seems to say ‘We’re Liberty — end of discussion.’ It has a very contemporary attitude,” he said.

The store’s Lasenby crest, named for founder Arthur Lasenby Liberty, has also been updated, and now features the wording “London 1875.” It will be used to accent the master brand.

Pentagram’s work also led to the development of a bespoke, “Lasenby” sans-serif font, which will be used across the brand’s communications.

The sans-serif letterform is very much à la mode, with brands including Burberry and Celine opting for clean, minimalist branding.

Indeed, luxury brands of all stripes have been racing to replace all the tails and flourishes from their logos and embrace a more pared-down visual identity. A re-brand offers an easy way to grasp the attention of a new, younger audience and keep up with the times. 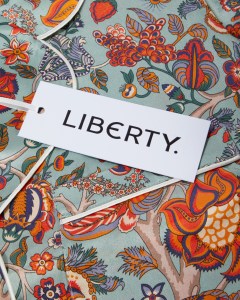 A swing tag with the new logo.  Photo courtesy of Liberty

Madeleine Macey, Liberty’s chief marketing officer, pointed out that the Tudor Revival store already features many different versions of the logo — living layers of history. One, which reads Liberty & Co., has been carved into stone on the store’s façade.

“All of those different typographies directly reflect the design aesthetic of their times,” Macey said. The latest logo will be carved into wood in the store and also feature big on the new web site, which launches on Thursday, June 11.

The branding will be used across all packaging as well as on own brand Liberty collections and collaborations. The brand’s signature purple background has also been shaded to a richer hue, set off by a whiter gold in the Liberty lettering.

With regard to the new web site, Eric Fergusson, Liberty’s e-commerce director, said the updated LibertyLondon.com is “faster than ever,” and also features enhanced presentation of content.

He said Liberty continues its international voyage, with the launch of specially tailored elements for the U.S. market and a richer user experience. Deliveries, duties and payments for all markets have been streamlined.

Liberty said its web site has seen strong revenue growth, averaging 45 percent per year for the last three years, while international growth has been driven by “functional improvements and brand awareness” of Liberty. Sales in that division have doubled in the past year.

The retailer said customers can shop from almost any country in the world with 200 shipping destinations, and more than 90 local currencies.

Asked if Liberty was emulating any online fashion retailers with the redesign, she said no. 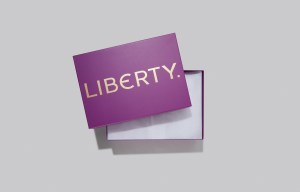 “We want to ensure the customer has a good journey, and that it’s easy to get around the site. We want to make sure our edit can sing and that there is the journey, with storytelling for the customer. Liberty is so much smaller than the other guys — we’re really a big shop. And the site is really where the new branding sings,” she said.

A major restoration of Liberty’s Mock Tudor building, a protected landmark, which started earlier this year continues. The store, built in 1924 from the timbers of two ancient battleships, has 1,550 windows that need to be removed and refurbished, many of them set with reclaimed stained glass from the 12th century.

Arthur Liberty designed the building to last 100 years, hence the urgency of the restoration: The building is now 95 years old.

For the first time since the store was built, the unique casement windows will be repaired by specialist craftsmen, off-site. Liberty said heritage restoration experts will aim to imitate the work of medieval blacksmiths, echoing the founder’s support for hand craftsmanship.

Macey said Liberty, like other retailers, was forced to put all of its plans on hold, given the lockdown in March.

“We wanted it to happen earlier this year, February time. But the feeling was not right. We waited, and we’re glad we’re launching it now. It’s so important that people recognize that we are looking to our future. We are custodians of Liberty and want to do it in the right way. We are not afraid. We’re invested in ourselves and in our future. What we’re saying is, ‘Here is our brand, we’re not going anywhere.'”

Liberty is making all of these changes one year after its private equity owner Bluegem sold its stake in the London specialty store in a deal valued at 300 million pounds. Bluegem described the transaction as a secondary recapitalization led by Glendower Capital, a global secondary private equity manager.

All of Bluegem’s partners co-invested on a personal basis with Glendower. Bluegem’s Marco Capello remains chairman of Liberty, while Adil Khan, who joined as chief executive officer in 2018, continues to run the business.

Revenue in fiscal 2018-19 was 85.2 million pounds, with profit of 6.5 million pounds, according to Liberty’s latest filing on Companies House, the official register of U.K. businesses. Since 2010, the fabrics business has more than doubled to more than 50 million pounds, Bluegem said last year.

Liberty produces fabrics for myriad brands including Gucci, which worked the British company’s bespoke designs into its fall 2020 collections, and has its own fabric mill in Olona, Lombardy.