Southdale Center gets some muscle from a fitness club — and more.

A pool at the Life Time resort-style fitness club at Southdale Center in Edina, Minn.

America’s first enclosed mall, Southdale Center in Edina, Minn., is getting a workout courtesy of Life Time, the owner and operator of 150 fitness clubs. Southdale today opens its reimagined addition — a new mixed-use concept occupying about 204,000 square feet and exceeding the space of the shuttered J.C. Penney Co. Inc. unit it replaces by 100,000 square feet.

In addition, “we have a handshake commitment to build 250 to 260 Life Time Living  apartments,” said Life Time founder and chief executive officer Bahram Akradi. The expansive Life Time development will occupy two buildings, separated by a new corridor entrance to Southdale Center — a measure of the mixed-use concept’s significance to the property.

“We’re basically, piece by piece, adding all these elements. We have 500 people in our development company. We have more architects than some of the largest architectural firms. We design, imagine, build, construct and envision the whole development,” he said, referring to shopping centers. “My reason for going to these mall owners and presenting them with a mixed-use plan is to transform these amazing assets that have gotten dated and reinvent them to become [something] that makes it work for everybody.”

“Fitness centers aren’t going to save the mall,” Akradi said. “This is 204,000 square feet that will pull 5,000 people a day to the center. The magnitude and quality of what Life Time brings is the game-changer. There’s full service spas, chiropractic, physical therapy, kids’ academies, including language and gymnastics. We have something for three-month-olds to 90-year-olds in a Four Seasons or Ritz Carlton-type of resort environment.”

Akradi said the breakdown of potential consumers will include the Life Time club, which will have about 4,000 members to start, and 400 to 500 people will work at Life Time Work. Life Time Living could potentially bring 260 to more than 500 residents to Southdale. The ceo said the foot traffic could provide diners for new restaurants and shoppers for retailers. “Life Time is a partner in the solution in the big picture,” he said. 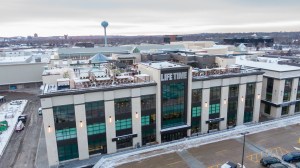 “Our iconic collection of properties generates billions of visits each year and having our finger on the pulse enables us to partner with dynamic brands such as Life Time to build the next generation of exciting and innovative experiential destinations,” said David Simon, chairman, ceo and president of Simon, adding that he wanted to stand back and let Akradi have the spotlight. “We’re constantly reimagining our properties to offer customers new health, dining, entertainment and shopping experiences that can’t be found elsewhere, and our partnership with Life Time to transform Southdale is a perfect example of our market-leading strategy.”

Simon Property Group, like other REITs, has seen the exit of retailers such as Sears Corp. and J.C. Penney Co. Inc., among others. Simon said similar to how Southdale was the catalyst that sparked the growth of the American mall industry in the U.S. in 1956, the same property, in 2019, is again at the epicenter of a booming trend that will ultimately redefine the mall and retail concepts.

“There’s too much retail, 24 square feet per capita,” Akradi said. “Some has to give itself to services. Everybody thinks online is going to be the death of retail. Online will even itself out, and the [customers] who don’t mind paying for shipping will pay for the convenience, and the others will get into their cars. All species come and go. There are the ones that are agile, and those that don’t adapt quick enough will fall apart.”

Life Time clubs are massive structures made from rock and glass, and are largely built from the ground up using state-of-the-art finishes. “We opened a Life Time club a year ago in Oklahoma City,” Akradi said. “One of the things I want to make clear is that in most cases, we’re not going into the old brick-and-mortar [retail pad]. We’ll take down a building and build a new structure from the ground up. The freestanding club resorts have curb appeal.”

When Life Time opened a unit in a 100-year-old former Macy’s location, Akradi said the marble staircases were the only things he left alone. “We made everything modern,” he said. “It’s a midsize coworking space with about 80,000 square feet of space. We have a number of projects with Simon, more than 20, over the next two to three years where they’ll be mostly brand new.”

In addition to continuing to open high-end fitness centers, Life Time’s coworking division, which has locations in Ardmore, Pa.; St. Louis Park’s West End and Houston, and now, in Edina, has plans to open 50 to 60 more in the next five years. 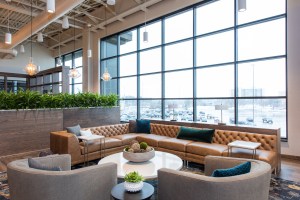 A coworking environment at Life Time Work at Southdale Center.

Akradi said the notion that malls are failing is false. “This mall in Southdale is absolutely the best 80 acres of land in the whole state of Minnesota,” he said. “It’s located in the most affluent part of the Twin Cities. It’s dense, central and beautiful. The 80 acres could support 3 million square feet of mixed-use development. The more congested places [malls], we’re realizing have to have the elements of live, work, shop, stay and play.

“Every market that’s strictly an office market has to convert some of the, say, 10 million square feet of office space and nothing else, or [malls] with 1.4 million square feet of shopping and nothing else, have to introduce the other elements of work, stay and play. After Christmas season [at a mall,] it’s a morgue. People are making all these trips with their cars. Instead of making eight to nine trips from a single-family home,” consumers, especially environmentally minded Millennials and Gen Z consumers, will appreciate having all aspects of their lives in close proximity.

“Southdale is the first enclosed mall,” Akradi said. “We drove our eight-cylinder cars there as fast as we could,” he said, adding that that script doesn’t work anymore.