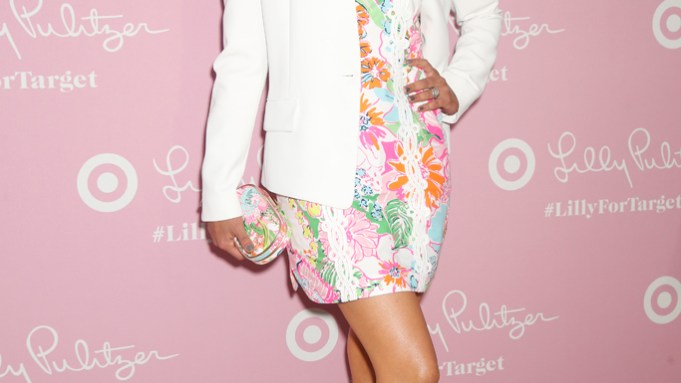 Target turned Bryant Park into a facsimile of Palm Beach on Thursday for the launch of its Lilly Pulitzer for Target pop-up shop at the Bryant Park Grill.

Pink beach umbrellas embellished with white pom-poms dotted the park, beach chairs with splashy Lilly Pulitzer patterns were strategically placed along the perimeter and an outdoor lounge with hammocks and beach chairs was framed by a topiary with the Lilly Pulitzer logo. A large pink-and-white beach house was actually a juice bar serving an orange/mango/ginger blend — Lilly herself had a juice stand in Palm Beach before she became a designer. There were free manicures and artists painting Lilly patterns on canvases. (A Target spokesman said the company doesn’t know what it will do with them yet.)

All this action, however, was secondary to the main event. The pop-up shop opened Thursday selling the entire 250-piece Lilly Pulitzer for Target collection. According to the Target spokesman, people arrived as early as 3 a.m. About 500 to 600 people, standing four-deep, were waiting outside at 8 a.m. when the doors opened. The line, which began at the Grill’s entrance near 41st Street, almost reached 42nd Street. By 10 a.m., the spokesman said “thousands of people had been through the shop.”

Shoppers at the pop-up were limited to five items. Target wants the collection to be available to as many as possible and wants to avoid what it terms “overbuying,” which sometimes leads to products being sold on eBay. The Lilly Pulitzer for Target collection goes on sale at Target stores and target.com on Sunday.

Brian Cornell, chief executive officer of Target, who flew to New York for the event from Shanghai where he was attending a vendor conference, was asked if he expects the collection to sell out at the pop-up. He said, “We’ll see. The interest is really high. Sometimes you get lucky. It’s the start of spring. Last week was really cold.” Cornell said Target is “very focused on really understanding guests and recommitting to style. This is an example of that.”

Despite the fact that Palm Beach, Fla., has always been a locale for the wealthy, Pulitzer was always “very inclusive,” said Jane Schoenborn, vice president of creative communication at Lilly Pulitzer. “Lilly Pulitzer for Target brings the resort lifestyle to a broader audience. We don’t offer much for the home. We’re thrilled to see the prints on all these categories.” Bestsellers included shift dresses in a variety of Lilly prints.

“One of the reasons we do this is for the buzz and excitement, which have already exceeded [our expectations],” said Kathee Tesija, chief merchandising and supply officer at Target. Referring to designer collaborations, Tesija said, “This is a mainstay for Target. We invented it and have done over 150 of them.” Tesija declined to discuss Target’s next partnership, saying only, “We always have a list of people we want to collaborate with. We’re always evolving, always changing.”

On Wednesday evening, Target rolled out the red carpet at a fete for the pop-up shop. A clutch of actresses arrived dressed in brightly patterned shifts from the collection. “I love what they did with it,” said Camila Alves, wearing the Nosie Posie dress and matching embroidered clutch. Alves pointed out her white pumps with gold spikes and said, “Louis Vuitton. I had to go for a little dazzle. I’m out in New York without the kids.”

“I’ve been modeling for Lilly since I was little,” said Bella Thorne, who was dressed in the Fan Dance shift. “I wore little shorts with little pom-poms on them.” Asked what her favorite product is in the collection, Thorne said, without hesitation, “The hammock — it’s friggin’ dope.” Kate Bosworth admitted to being a fan of the towels, saying she could decorate her entire bathroom à la Lilly. “I was raised on the East Coast, in Connecticut,” she said. “We used to summer on Nantucket and everyone was decked out in Lilly Pulitzer. It’s a very bright, beach vibe, bright prints on classic silhouettes.”

Target hasn’t seen this level of excitement over a designer collaboration since it launched Missoni for Target in September 2011. Demand for Missoni for Target caused the retailer’s Web site to crash and a pop-up shop in Manhattan had to close early because its inventory sold out.