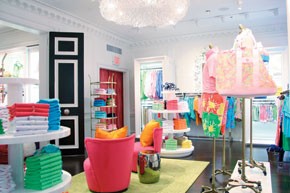 The company, which is about to mark 50 years in business, will celebrate the opening on Tuesday of its first Manhattan store at 1020 Madison Avenue. The 3,600-square-foot space is clearly a paradise for Lilly Lovers (a trademarked name the company uses to describe devoted customers).

The freshly painted white walls work as a backdrop for the pink and green in the clothes hanging on custom-designed silver fixtures. There is a grand pink carpeted staircase, printed with Lilly’s signature pink-tinted mirrors, bright pink couches with inviting green and orange pillows, vases of cala lilies on tables of jewelry, sunglasses, shoes and handbags and framed vintage family photos of Lilly herself. There are even palm tree-shaped treats for the dogs who come in for a visit, as well as a juice cart so shoppers can sip while they browse.

“If Lilly lived in New York, on Madison Avenue, this would be her residence,” said Jon Patrick, visual director at the firm. “This store tells the story of the brand, but with that residential, elegant, inviting feeling.”

Designed by architect Michael Newman, with interiors from Bear Hill Interiors, Patrick said staffers worked around the clock to quickly transform the space from what was a kitchen design showroom into the clothing designer’s flagship. Workers knocked down a wall, only to discover another room on the first level. That area is now dressing rooms and a built-in showcase for shoes, which was left over from a Givenchy store that occupied the space about 10 years ago.

“The fixtures were specially designed to blend in, and not compete with the liveliness of the clothes,” Patrick explained.

The collection retails from $65 for a polo to $348 for an embellished tunic.

On the upper level of the store there are two rooms — one for children’s wear and the other for men’s wear and swim. The children’s area’s focal point is a large vintage birdcage, which holds a few looks for the season. There are small pink benches for story times, which the store plans to hold regularly, and jars filled with candy on upper shelves — only for parents to reach.

As an added service, the store has a concierge, who will assist shoppers with just about anything — whether they need help bringing a stroller into the store, would like a dress custom-monogrammed, need dinner reservations, tickets to the opera or even a reservation on a private jet.

“I just got off the phone with Lilly, and I was just telling her how incredible this place looks; it’s even better than I thought it would be,” said James Bradbeer Jr., president of Lilly Pulitzer. “We certainly have arrived.”

Bradbeer declined to give first-year sales projections for the store, but said he is counting on it to be the number-one unit in the chain.

Rooted in Pulitzer’s hometown of Palm Beach, Fla., and now based in King of Prussia, Pa., the brand has become known for its whimsical printed shift dresses, but now offers a full range of sportswear and accessories for women, men and children. Pulitzer currently operates 20 company-owned stores nationwide as well as 75 licensed stores. Next, the company plans to open a store in East Hampton, N.Y., on May 21 before heading to Palm Beach to celebrate 50 years in business on May 30.