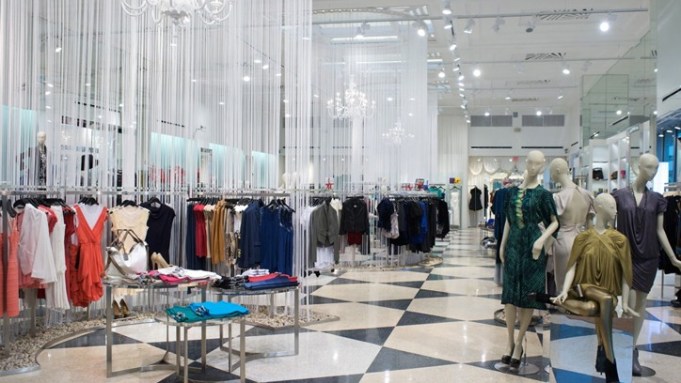 MIAMI BEACH — Lincoln Road hasn’t seen this much action since its mallification in the Nineties.

The outdoor mall, which this year celebrates the 50th anniversary of Morris Lapidus’ Mod, pedestrian redesign, has a slew of store openings and other developments, from its east end at Washington Avenue to a recent, block-long expansion west to Alton Road.

Most tenants spill out onto a plaza paved in black-and-white Portuguese stone and landscaped by Raymond Jungles with Florida Everglades vegetation. But the boom has overflowed onto Lincoln Lane, a service alley to the north, which developers are slickly refurbishing. There are sole, primary entrances, such as for Crate & Barrel’s offshoot CB2, and secondary facades that also access Lincoln Road, such as one for Quiksilver.

Michael Comras, principal of Comras Co., a Miami Beach-based real estate development and leasing firm, reports the lane is optimum in capturing foot traffic from parking lots and garages, as well as Frank Gehry’s impending performance hall for the New World Symphony and its adjoining park designed by West 8, the Dutch firm behind Governors Island in New York.

“It also makes sense because many retailers don’t want such deep spaces on Lincoln Road. We’re dividing them into two stores on the road and lane,” he said.

Rents on Lincoln Road average $120 to $170 a square foot, with side streets going for around $60 a square foot, according to Comras. He added the area hasn’t experienced the double-digit decreases in the recession as have other parts of the U.S., since prices have steadily increased and have balance out with realistic sales. Robert Cohen, an executive vice president with Robert K. Futterman & Associates, a New York-based retail leasing firm with Los Angeles offices, agreed. “Unlike Robertson Avenue in L.A., where rents were very unhealthy and grew too fast, Miami Beach has been resilient in this recession,” he said.

Recognizing its golden goose, the city of Miami Beach plans to gentrify the seedy blocks between Washington Avenue and Collins Avenue to the east, which can’t become pedestrian due to bus routes. A new, landscaped median, lighting and black-and-white Portuguese stone sidewalks are intended to entice hotel guests and tourists along Collins to explore farther west. Once reserved for discount fashion stores, fast-food chains and dilapidated offices, the block has been cleaned up with Ulta and Wings Beachwear branches, in addition to the renovation of an historic, mixed-use building at 350 Lincoln Road. The Wings Group, a New York-based commercial real estate firm that owns the property, hasn’t confirmed tenants.

J. Crew creative director Jenna Lyons said the company considered other Miami locations, but Lincoln Road always topped the agenda. On the small size for its fleet, the company’s 4,000-square-foot J. Crew Collection store adheres to its new strategy of opening smaller units, with the possibility of adding separate men’s and children’s wear shops. The store carries more exclusive, pricier merchandise such as a sequined skirt for $600, and a shearling jacket for $2,000, as well as T-shirts for $22 and jeans for $98.

“We’re trying to find unique, precious spaces,” he said, furthering novelty with offbeat fixtures such as antique printing presses. “We’re also taking advantage of the recession to find leases below market value, like this space is less than 12 to 24 months ago.”

Heloisa Maia, director of retail for Osklen USA, was drawn to 1111 Lincoln Road for its green commitment and high-profile architects. “I think it will be a tour stop for architecture buffs as well as fashion people,” she said of the company’s second U.S. location. “Miami Beach will be the place this season.”

The 2,200-square-foot flagship with cement, salvaged wood and black-and-white Portuguese stone has similar merchandise to the New York unit, apart from the injection of more beachwear, swimwear and summer looks.

Claire Chambers, ceo of Journelle, said she was looking to expand in Los Angeles before falling in love with 1111 Lincoln Road’s tenant mix and foot traffic. “In this recession, I didn’t want to be in a mall. Here, people will be running errands, dining and going to the movies,” she said.

Opening early this year, her 2,500-square-foot space with midcentury-modern furniture and light wood differs from the brand’s smaller, darker New York store. Aware lingerie is a notoriously tough sell in Miami, Chambers offers more fashion-inspired product and loungewear that translates for the beach. “Florida is our third-highest state for Web sales,” she said.

Brad Sell, Quiksilver’s president of retail, said foot traffic has increased on Lincoln Road, as it’s evolved from a shopping destination to a multipurpose landmark. Unlike the company’s Collins Avenue store, Lincoln Road attracts locals as well as tourists, and offers easier access and parking. These advantages factored into the December debut of a concept store with boardshorts, surf accessories and surf and paddle boards. The expansion from 1,800 to 5,200 square feet also houses an on-site custom section for boardshorts and handmade totes of recycled window banners.

Sell said the road’s business climate is changing for the better. “The western end of Lincoln Road will become the centerpiece, which will drive traffic into our store and help us showcase our new retail concept,” he said.

Even longtime occupants of the area are getting in on the expansion game. Originally opened in 2005, BCBG Max Azria expanded from 5,000 to 7,750 square feet to present the Hervé Léger collection and more accessories. It consistently outperforms other South Florida stores, according to designer and ceo Max Azria.

“Lincoln Road is special,” he said. “We believe even in this difficult climate, there are only good things to come out of this part of the country.”