Linda Dresner, who for four-and-a-half decades has maintained a distinct voice in luxury retailing as a purveyor of some of the most advanced and edgy designers around the world, has decided to close her eponymous boutique in Birmingham, Mich.

“This is bittersweet for me,” said Dresner on Thursday. “It’s been a long haul. Very happy times. People who have been coming in tell me they’re sad I am closing the store, and that there is nothing to replace it.”
Asked why she decided to close her three-level, 6,000-square-foot store at 299 West Maple Road, Dresner pointed to her age, which she did not reveal, and added, “We’re at the end of the lease. It’s time.” She did say business has been challenging through the pandemic. “It’s been difficult but we were coming out of it,” she said.
She said closing the store doesn’t amount to a retirement. “I’ll do what I do,” said Dresner, an octogenarian. “I have a happy husband. We will spend more time together.” She intends to stay in Birmingham, her hometown.
“Women were always the focus — women who wanted to be independent in style but not appear foolish.”

Dresner also had a store on Park Avenue in Manhattan, which closed in 2008 due to rising rents and the Great Recession, as well as rising competition and widespread discounting by department stores. She decided to focus on her store in Michigan, where there was less competition but also not as wide of an audience that New York City offered. Still, the Michigan store always had panache and maintained its distinct positioning on the retail landscape.

“I think of my store as a big closet,” Dresner once told WWD. “I think about putting clothes together as I would wear them. I bought John Galliano in a younger more interesting way. Being early is one thing, but I also show the clothes in a particular way. I’d put a Galliano gown with shoes that don’t belong to Galliano and put a jacket or topper from another designer over the gown. I’ve mixed Margiela with someone more dressed-up like Balenciaga.”

But that wasn’t the case with certain other designers. “I rarely mix Comme des Garçons with anything,” she said. “Rei Kawakubo has a strong signature and is exclusive enough that it still seems pretty special.”

Many in the fashion and retail industries consider Dresner a visionary, and part of a rare breed of female entrepreneurs, such as Martha Phillips and Sara Fredericks who also had established small, high-profile and influential Park Avenue boutiques, as well as Joan Weinstein with her Ultimo boutique in Chicago. All three are deceased. They were all out front with the latest fashion trends, and helped to elevate the profile of many emerging designers. High society ladies and celebrities flocked to their doors, especially for those exclusive trunk shows, afternoon cocktails and high service levels. 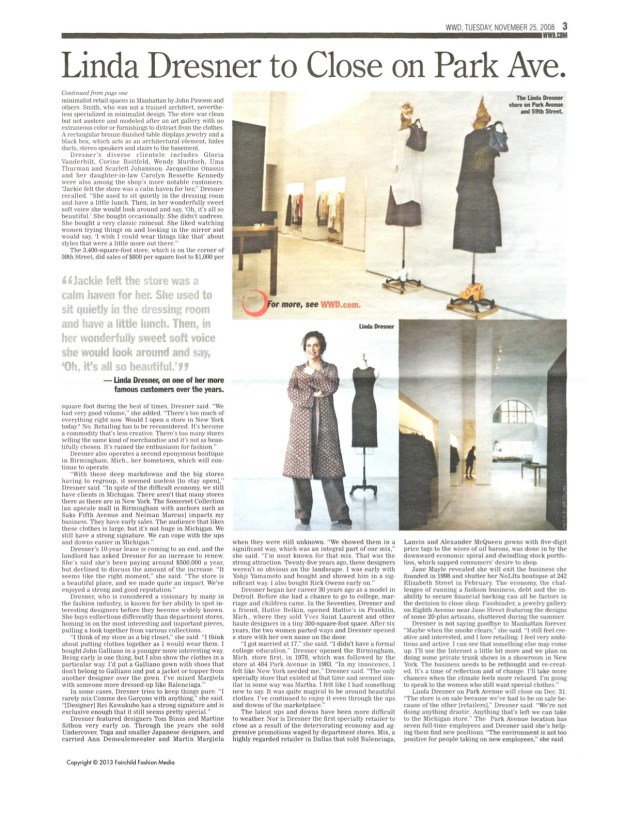 “Jackie felt the store was a calm haven for her,” Dresner told WWD when she closed her Park Avenue store. “She used to sit quietly in the dressing room and have a little lunch. Then, in her wonderfully sweet soft voice she would look around and say, ‘Oh, it’s all so beautiful.’ She bought occasionally. She didn’t undress. She bought a very classic raincoat. She liked watching women trying things on and looking in the mirror and would say, ‘I wish I could wear things like that’ about styles that were a little more out there.”

Dresner’s store was also among the first in the U.S. to carry Jil Sander. She did so well selling the German designer’s collection that she opened a Jil Sander shop right next to her own shop. Dresner’s stores had a minimalist appeal, though she had  a special knack for intermingling avant-garde artwork and sculpture with the designer merchandise for dramatic effect.

“It’s really the end of a retail era. Linda was so ahead of the retail game,” said Visnja Brdar, designer and owner of Visnja Jewels, lamenting the news of the Birmingham store closing.

Brdar recalled the impression she had of Dresner’s retail operations, when Visnja Jewels had a trunk show at Linda Dresner on Park Avenue. “Her stores were like art galleries. Her buy was so artful, and she was definitely one of the first for who you could truly use the word ‘curator.'”

“Linda Dresner has been an All-American institution for over 45 years,” said Andrew Burnstine, the grandson of Martha Phillips. “She was very much like my grandmother, in so many ways. They both would dress up to the ‘nines’ and spend most of their time doing what they loved best — being in their store. Martha often commented on the ‘gutsiness’ of Dresner.…Martha said it best years ago, ‘When I die and go to heaven, I hope they have a Martha’s. I am sure there will be a Linda Dresner boutique right down the street as well.'”

Dresner began her career as a model in Detroit and got married at the age of 17.

In the 1970s, Dresner and a friend, Hattie Belkin, opened Hattie’s in Franklin, Mich., where they sold designer merchandise in a 300-square-foot space. After six years, the partners parted ways, and Dresner went out on her own and opened the Birmingham store first, in 1978, which was followed by the store at 484 Park Avenue in 1983, with her own name on the door.

“In my innocence, I felt like New York needed me,” Dresner told WWD when the Park Avenue store closed. “The only specialty store that existed at that time and seemed similar in some way was Martha. I felt like I had something new to say. It was quite magical to be around beautiful clothes. I’ve continued to enjoy it even through the ups and downs of the marketplace.”