Bridge has been a relatively sleepy sector as retailers struggle to find ways to reinvent it amid competition from the hot contemporary zone.

By Marc Karimzadeh and Whitney Beckett on December 26, 2007
View Slideshow 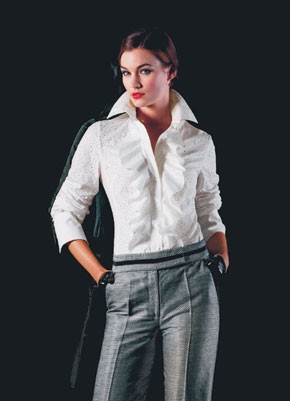 Bridge has been a relatively sleepy sector as retailers struggle to find ways to reinvent it amid competition from the hot contemporary zone.

However, the category is seeing some signs of a resurgence, led by fresh entries such as Premise and merchandising formats like Bloomingdale’s New View department and Saks Fifth Avenue’s Modern floors. The renewed activity is giving hope to younger labels that are looking to bring a point of difference to bridge. Here, a roundup:

Hilton Hollis aims to become a strong bridge player — just don’t label him as such.

“I find the word ‘bridge’ so dirty these days,” the designer said, echoing sentiments of many contemporaries. “We like to refer to it like a modern collection. I feel like some people have a bad idea about bridge, which comes from many years of the ‘same old, same old’ mentality. Now it’s seeing some life injected into it.”

Before launching his label in June 2005, the Fashion Institute of Technology alum was an assistant designer at Dana Buchman. He apprenticed with Tim Gardner when Gardner was a creative director at Calvin Klein, and freelanced for John Bartlett. Hollis, 33, was inspired to start his own line after speaking with several retail salespeople on a trip to visit his family in Atlanta. “I asked them, ‘What are you missing?'” he recalled. “I heard there was a sophistication missing in the price point that was the bridge area, so I wanted to take the designer aesthetic and bring it to the bridge customer. Our customer is a woman who shops at the high end, at Valentino and Oscar de la Renta, for example, as well as from our collection, which is at a more affordable price.”

The collection has an architectural feel, with classic silhouettes enhanced by exaggerated seaming. Much of it is inspired by Hollis’ travels. For fall 2008, he sought inspiration from a recent trip to Amsterdam, with prints loosely drawn from Van Gogh paintings.

Hollis said he had no qualms about taking a swing at the bridge sector. “I am all for a challenge,” he laughed. “When I looked at starting a business, I wanted to do something that wasn’t offered. I am not looking to be the next big hit in the fashion industry, but for me, it’s about appealing to my customer…especially with women who are senior executives and Baby Boomers, there’s a huge void out there for sophisticated, modern, affordable clothing that fits a woman’s body.”

Christian Schofield Arkins wants his new bridge-priced brand to have staying power, so he looked to his mother’s family for inspiration.

William & Augusta takes its name from the president and creative director’s maternal grandfather (William) and great-grandmother (Augusta), in addition to adopting a Chanel aesthetic that nods to the Schofields, his mother’s family, whom Arkins called a “very old-world New York City family.”

“There’s a lot of new labels that don’t stick around too long, but we based our story on the heritage of my mom’s family,” said Arkins, the former creative director of Original Penguin. “We make the collection here — her family was made in New York, too.”

Launching for spring 2008, the line wholesales for $200 to $1,400. The dresses and sophisticated separates use European fabrics, like silk chiffon, Lurex tweed and jacquard, in neutral solids, as well as paisley prints and polkadots. The first collection’s look book is tagged “The Secret Grandma Diaries,” but the suits, dresses, skirts and blouses look shorter and girlier than anything worn by a grandmother.

Arkins, who also designed for J. Crew and RRL, projects the line will do less than $500,000 in the first year. The privately funded company has plans to launch both a contemporary and a men’s line within two years.

Helene Kidary’s path to Seventh Avenue was anything but conventional.

The designer spent more than a decade in the technology and telecommunications fields before stumbling on an article about the strength of denim in the Wall Street Journal in 2004. “I thought, ‘This is taking off,’ and has an iconic factor and momentum at the time with no signs of slowing down,” she recalled. So Kidary put together a denim collection based on blending the workwear fabric with silks, linens and different cotton mixes. More recently, as the denim sector cooled, Kidary decided to switch gears and produce a complete collection targeting the bridge sector.

“The concept of the woman I am dressing hasn’t changed, the fabric has,” she said. “We have women aged 35 to 50 who lead a fast and furious lifestyle. She is the head of the home, the company and the social club. If you look at the shift of wealth that is occurring with women today, women are in charge of the majority of home purchases, automobiles and electronics.

“It’s catering to the woman who has to go from corporate to cocktails, from after-school to dinner,” she added. “Who is dressing these women for all the different facets of her life? That is the HK woman. She wants a refined look; it can’t be cost prohibitive for her.”

The new bridge direction will bow at retail this spring. Key pieces include a Flapper wool-stretch blend pinstriped suit inspired by Audrey Hepburn with a 24-inch-wide leg hem and a traditional suit jacket, and a high-waisted skirt in that fabric teamed with a jacket featuring a cutaway label and an arched back.

“The ‘neo’ or modern bridge category is where I see these women shopping repeatedly and I am here to cater to that woman,” Kidary said. “I think women want to be fashion-forward and it allows them to demonstrate their strength and confidence but they want it at affordable prices.”

Kidary cited multiple sources as inspiration for her designs. “It can come from reading an article about a woman who has achieved a point of success or done something inspirational to other women, or from existing designers and how they choose to interpret a silhouette based on a woman as it serves to empower her,” she said. “We have such challenges throughout our day that the last thing we want to be worrying about is how we look…anything on how to make a woman dress and feel more comfortable in her day and night is an inspiration to me.”