Living at the Mall: Stores, Food, Movies And Residences, Too

Developers at the International Council of Shopping Centers convention said they're looking to break out of the retail mold to lure shoppers. 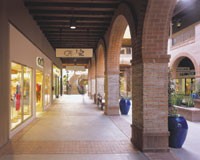 LAS VEGAS — By mass market standards, it’s audacious — Wal-Mart with a graceful curved marquee and a multicolored facade. Or a Target with a wide pedestrian brick plaza, palm trees and a distinctively Floridian feel.

The Wal-Mart is situated in City Place in Long Beach, Calif., and the Target prototype is headed for the 650,000-square-foot Shops at Midtown Miami, an “urban infill” opening in fall 2006.

The projects, both from Developers Diversified Realty Corp., based in Beachwood, Ohio, underscore how developers are trying to break out of the mold. They know they’ve got a jaded consumer on their hands, and that creating something new and different is crucial, particularly after a decade of building downtown projects, suburban malls and lifestyle centers that often seem contrived, the same as the one in the next county or passe by the time they open.

At the International Council of Shopping Centers convention, held here May 22-25, developers promoting projects in the works also hyped all the restaurants, cafes, theaters, apartments and parks they’re incorporating into space that has come available due to the rush of department store consolidation recently. Overall, developers are reorienting projects to be mixed use; looking to do more downtown revitalizations, rather than build in the already over-malled suburbs, and believe that consumers, if they are looking for anything in particular, it’s convenience, meaning they don’t want to go far to shop, dine or enjoy a park.

They still insisted, however, that retailing is at the core of their projects, and it’s where the planning has to begin in order to attract the nonretail elements. Some were heartened by what they see as a wave of new retail concepts on the horizon, with Gap, American Eagle Outfitters, Aeropostale and Limited Brands all planning additional divisions to capture wider demographics.

There are also several emerging specialty chains developers are latching onto, among them Swoozie’s, a new retailer for contemporary gifts, accessories and stationery; Lucy, an activewear chain out of Portland, Ore., with about 15 stores; Sony Style, which operates 17 stores and has seven announced openings, according to its Web site, and Hallmark Cards, which is adding product lines and gifts. They are also looking to established expansion-minded fashion retailers such as Lacoste, Scoop, The Apple Store and Ted Baker.

This story first appeared in the June 8, 2005 issue of WWD. Subscribe Today.

On the restaurant scene, there’s Iron Chef Morimoto’s new restaurant called Pauli Moto’s, which recently began opening locations in partnership with the Ardaji Restaurant Group from Greenwich, Conn., and is being designed by Jay Valgora of V Studio. Developers are also eyeing California Pizza, which is rolling out a new format; Brio, an emerging Italian restaurant chain, and Legal Seafood, which is entering many more markets.

The other buzzword at ICSC was authenticity, meaning consumers don’t want another sterile lifestyle center.

“The word we hear is ‘organic.’ People want something that belongs to the community,” said Tracey Gotsis, senior vice president of development marketing, Westcor, a subsidiary of the Macerich Company, based in Santa Monica, Calif. “Don’t throw capitalism at us. That’s what consumers are saying. They want open space.”

“You are always going to have a certain amount of similarity in the mix of the stores, but there is such a greater effort being put forth today to create a difference,” said John Bucksbaum, chief executive officer of Chicago-based General Growth Properties.

This year’s ICSC convention was the trade group’s largest ever, and its most upbeat in years, attracting a crowd of 40,000, including developers, retailers, brokers, architects and representatives of municipalities.

Retailers and builders, both flush with cash, expressed an open-to-expand attitude. “I really believe the whole tone for this convention has just been fabulous. Sales are up, and our portfolio will do over $500 a [square] foot,” said Robert Taubman, chairman and ceo of Bloomfield Hills, Mich.-based Taubman Centers Inc.

Taubman’s mood is brightened by being able to get back to business, considering major consolidation activity, with General Growth’s $12.6 billion takeover of The Rouse Co., and Simon Property Group’s $4.8 billion acquisition of Chelsea Property Group last year, seen as the last of the megamergers, at least for a while. Earlier, Taubman thwarted a takeover attempt for his own company by Simon.

Consolidation activity in the near future will be about individual properties, with plenty of strip centers expected to change hands and then be redeveloped. Some will undoubtedly be transformed into “lifestyle centers,” though developers are starting to shy away from that designation, and for good reason. Lifestyle centers have proliferated over the past decade, but many were poorly planned and seem out of touch with local aesthetics and consumer psychographics, according to some of the architects and developers interviewed at ICSC.

Still, developers did cite certain projects that they feel create a sense of place, such as La Encantada, an open-air center nestled in the Catalina Foothills of Tucson, Ariz., and built with meandering walkways, patios and courtyards in stucco, brick and clay tile to reflect a Southwestern Mission style.

They also cited Ross Perot Jr.’s Victory project in Dallas, which is bringing 24-hour activity to the downtown area, next to the central business district. At its core is the American Airlines Center, opened in July 2001, as well as a W hotel and condominiums. Eventually it will all be ringed by additional condos, offices, restaurants and retailers.

Still, even as they draw criticism, lifestyle centers continue to mushroom across the nation, and it’s a real concern to the development community. Of the 150 or so announced and currently on the drawing boards, maybe half will get built, according to real estate professionals.

“I don’t think lifestyle centers mean anything anymore,” said Chris Weilminster, senior vice president of leasing, Federal Realty Investment Trust, based in Rockville, Md. “It’s about [creating] a high-quality retail opportunity. Nobody wants to be hit in the head with another DisneyWorld. Subtle things can be done to create environments that consumers like, and they don’t necessarily know why they’re liking it.”

“At the end of the day, we are in the retail business. It starts with that,” General Growth’s Bucksbaum said. Asked about the lifestyle center phenomena, he maintained, “It’s a better proposition when it’s part of a larger retail project.”

“There is no pure definition,” of a lifestyle center, Taubman added. “What is a retail center all about? It’s about the merchandise.”

Beyond the goods, developers have formulated other ingredients for what they believe makes for a successful project, and at ICSC, they made it clear they’re looking toward:

In planning San Tan Village, for example, a Westcor project in the southeast valley of metro Phoenix, nine focus groups were conducted and the city council and neighborhood groups were consulted. “We are depending a lot more on stakeholder input,” said an official of Westcor.

“People want authentic expression of themselves, something that feels real. They see one mall after another and it just looks all the same,” said Henry S. Miller 3rd, chairman of the Dallas-based Urban Partners. “You go in a typical mall, and other than slight design changes you see the same lineup of tenants,” Miller added. “I like it when there are a lot more smaller shops and shopkeepers with an image evoking the entrepreneur. A lot of variety, a high tenant count. That keeps people coming back. We see ourselves as community development artists — place-making instead of space-making. Creating something that seems mature, urban. It’s hard to do, and much of what is out there borders on being trite and affected. It can’t be fake.”

And it can’t too dependent on the traditional anchor concept, particularly with rapid consolidation occurring in the sector.

“We believe food makes our centers as close to recession proof as possible,” said Weilminster of Federal Realty. “It drives daily traffic, which helps us lease peripheral space.” Key food tenants for Federal properties are Giant, Safeway, Whole Foods, Trader Joe’s and Balducci’s. Wal-Mart, he said, beats everybody on food prices, but other groceries win with their service and selection of perishable foods.

“Consumers want clean urban condos, with doormen and valets, and don’t want to deal with mowing the lawns,” observed Jeffrey C. Paisner, senior managing director of The Lansco Corp. “People want immediate shopping environments, little urban environments instead of commuting to shop. They want the residential, retail, office and hotels — self-contained urban environments. Let’s face it — a lot of major American cities don’t have substantial downtown retail environments. In Dallas, you still have to go to the Galleria or Northpark. In Atlanta, you have to get in a car and drive to a mall.”

“Downtown revitalization is a big thing in most cities. Every city needs help,” said Mayor Beverly O’Neil of Long Beach, Calif., during an ICSC session on urban development.

“If you look at our malls, the mix is getting increasingly diversified,” said Richard Sokolov, president and chief operating officer, Simon Property Group, based in Indianapolis, which concentrates on building “unenclosed regional malls of scope.”

The biggest change is the emphasis on sit-down dining, but in addition, about three years ago, Simon started incorporating residential into the mix. But Sokolov stressed: “We are very focused on making sure that the core of the project is retail. We have to make sure we have compelling retail. That’s what makes the residential attractive. We’re tending to better fashion-oriented merchandise and upgrading price points in appropriate markets.”

“We are a retail developer and we are excited about the changes in psychographics of much of the country,” said Randy Brant, senior vice president of development leasing, Macerich. “People are looking for urban lifestyle apartments or condos where you go right down to restaurants, shopping, groceries and entertainment.” That phenomena, Brant added, has opened “incredible opportunities” for change over the past five years in regional shopping centers.

Before, Brant said, “We would never have attracted food shopping to be integrated with fashion shopping. The U.S. was so chain-driven. Now fashion retailers love to see a Whole Foods. People buy what they are going to eat that night. Years ago, it was more about shopping once a week for groceries.”

Stan Laegreid, principal of Callison Architecture, based in Seattle, sees shopping centers and malls becoming far more niche-driven, whether it’s to attract younger audiences or ethnic groups. He said malls will be packaging their properties to niches, or “building stories around the shopper and who that shopper is and no longer trying to cater to everyone.

“People identify with, and are very conscious of, where they go shopping,” Laegreid said.