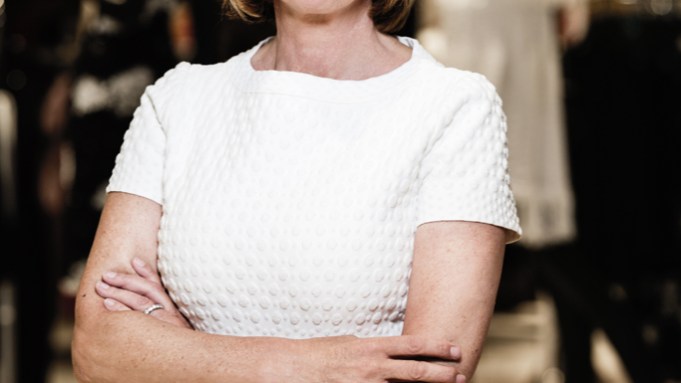 Lord & Taylor and Hudson’s Bay, North America’s oldest department stores, at times veered toward extinction. But with the current diet of major renovations, incoming contemporary concepts, and omnichannel initiatives, dinosaurs they don’t have to be.

“We’ve been on a mission to really modernize the Lord & Taylor brand in the U.S. and move it forward, and position Hudson’s Bay as the retail leader in Canada,” says Liz Rodbell, president of the Hudson Bay Co. department store group.

Providing a progress report on Lord & Taylor, with 50 stores concentrated in the Northeast, and on Hudson’s Bay, with 90 stores across Canada, Rodbell cites a “robust” program of store renovations, designer line launches, updated marketing campaigns for fall, and merchandise and technology advances to grow the L&T and Hudson’s Bay dot-com businesses, which — despite being underdeveloped — have been raking in double-digit gains.

On the agenda for fall:
• Karl Lagerfeld Paris will have “a soft launch for fall and a big launch for spring,” eventually parking at all Hudson’s Bay and L&T stores, Rodbell says. “It will include sportswear, dresses, suits, handbags and we have plans for more, although we have not finalized those assortments yet. It’s modern fashion right for the more tailored customer and exclusive to us in Canada and in the Lord & Taylor trading area.” Karl Lagerfeld Paris will be better priced, and housed near Michael Kors and Calvin Klein.

• Miss Selfridge, a label from U.K.’s Arcadia Group, will be introduced in the fall to L&T’s Fifth Avenue flagship and certain L&T branches, as a regional exclusive. In Canada, Hudson’s Bay has been rolling out huge in-store shops for Arcadia’s popular Topshop and Topman brands.

• B Brian Atwood footwear and handbags will be launched exclusively this fall at L&T and Hudson’s Bay.

• Design Lab, a fast-fashion, contemporary private label launched in all 140 stores this year and selling for less than $100 on average, will add handbags and intimate apparel for fall and spring, respectively. Jewelry could show up next year.

• Dresses, a destination category at L&T, will be expanded by bringing Vera Wang, Laundry and Belle by Badgely Mischka styles to all doors from the current limited distribution.

On the marketing front, L&T is running an eight-page insert in Vogue’s September issue. The Vogue Advertising Studio selected the looks from L&T’s Design Lab photos. Dylan Penn, the daughter of Sean Penn and Robin Wright, is being used for a New York Times campaign, and Stephanie Seymour is the face of the fall campaign for The Room, Hudson’s Bay designer floor on Queen Street.

“We believe there is an opportunity to differentiate the merchandise much more versus what is offered in the competition,” says Jerry Storch, the chief executive officer of the parent HBC, referring to Lord & Taylor stores and online. “We want product that is not available elsewhere. It’s a unique department store positioned between the moderate behemoths and super upscale department stores.” As a Northeast regional operator, “It’s challenging in some ways, easier in others. You’re not trying to meet the needs of every part of the country and every demographic.”

“Remember, Lord & Taylor is a regional bolted on a global department store which has advantages over just a regional that sits alone,” notes Richard Baker, HBC’s governor and executive chairman. “Lord & Taylor is tightly linked with Hudson’s Bay.”

Of the two chains, Canada’s Hudson’s Bay, which dates back to 1670, has about six years of remerchandising and renovations under its belt since it was purchased by the parent corporation and has been the stronger performer. Lord & Taylor, founded in 1826, has had a tougher go of it, as a regional retailer confronting greater competition in the U.S. compared to Canada’s retail landscape. Last year, the two chains posted a combined 1.5 percent comparable-store increase.

Lord & Taylor must shrug off a lingering reputation as “your grandma’s store” and has been moving closer to the goal by increasing contemporary offerings, resetting floor space appropriately and staging special events tied to social media and the Millennial crowd to draw new audiences, all the while seeking to preserve the traditional loyal clientele.

Over the next two years, 10 L&T doors will undergo a range of renovations, including a top-to-bottom project in the Stamford, Conn., store and another in the Manhasset, N.Y., store, which will be expanded by 37,000 square feet and given a dramatic glass facade, as part of its total renovation.

“Contemporary across the house will be key” through the renovation process, while other departments such as beauty and footwear will be overhauled as well, Rodbell says.

Past renovations have been on smaller scales, and projects at the 650,000-square-foot Fifth Avenue flagship have been ongoing, but piecemeal. The flagship is L&T’s biggest volume store and the second biggest in the department store group, next to Hudson’s Bay’s Queen Street flagship in Toronto. But the L&T flagship is nowhere near generating the revenues seen at Manhattan’s other department store flagships, with its much lower traffic. “There are some ideas for a bigger project” to upgrade the L&T flagship, Rodbell says, declining to provide details.

North of the border, the renovation strategy at Hudson’s Bay is equally robust with projects planned for stores in Ottawa, Calgary and Montreal, as upgrades continue at the Queen Street flagship. Over the last year and a half, “We’ve meaningfully touched every square foot” of the flagship, which has 550,000 square feet of selling space. A comprehensive 100,000-square-foot men’s floor, a Kleinfeld’s bridal store, and Canada’s largest footwear floor, at 30,000 square feet, were created, among other advancements.

The Queen Street store has turned over 170,000 square feet so Hudson’s Bay Co. could create on the site the first Saks Fifth Avenue store in Canada. It’s scheduled to open next year.

HBC owns Saks as well as L&T and Hudson’s Bay and will soon own Galeria Kaufhof in Germany.

On Queen Street, Saks and Hudson’s Bay will compete for consumer dollars and will have a small degree of merchandise duplication, according to HBC executives, though the proximity doesn’t disturb Rodbell. “We are not planning to lose anything. We believe [Saks] is going to be additive to traffic. There was certainly enough space to add Saks.” Even with the construction, she says, business at the Queen Street flagship has continued to grow.

Rodbell has the unusual task of heading two major chains operating in separate but bordering countries, requiring constant traveling and greater awareness of climates, consumer demographics and product preferences. General merchandise managers also work both chains but from the divisional merchandise manager level and down, there are still separate organizations. While the organization has come under some industry scrutiny, Rodbell defends the structure: “There are a lot of similarities in the products that we carry and the lines we are continuing to build. By having one vision, one view, we can build on those strengths and opportunities. It really helps the organization from an assortment standpoint. We also have a very consistent service model.”

What about the traveling back and forth? “I think the organization is way past that,” Rodbell says. “The world today is global. The world is fast. We are very connected. With this dual banner strategy, as a bigger organization, we can be of support even to Saks.”