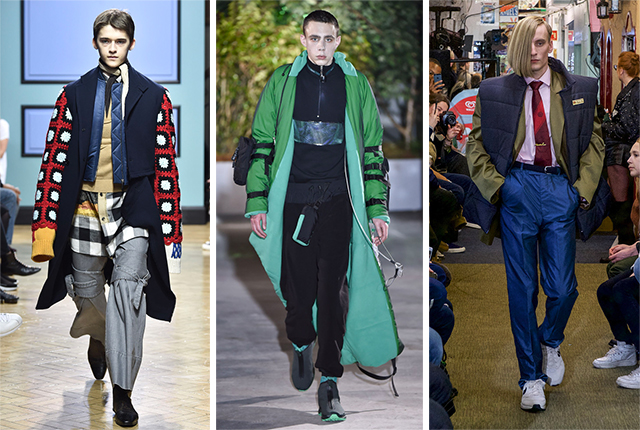 LONDON — The big names may have departed, but buyers said London Fashion Week Men’s remains an important stop on the calendar for its fresh ideas, street cool — and occasional socio-political commentary.

Among the standout collections were J.W. Anderson, Craig Green, E. Tautz, Cottweiler, Martine Rose and A-Cold-Wall, according to buyers on both sides of the Atlantic.

“Additionally, Central Saint Martins and other fashion colleges and organizations like Fashion East are nurturing young fashion talent and helping to ensure that the market continues to foster an incredible, youthful spirit and forward-thinking fashion. It’s an inspiring balance,” he added.

Pask said he always finds the London shows relevant and inspiring despite the comings and goings of big-name designers, which to him are simply organic and natural movements — cyclical shifts.

“For me it’s about quality and originality, not the quantity on a schedule,” said Pask, in reference to a fall lineup that was heavy on local designers and missing the bigger brand names of days past including Burberry, Coach, Gieves & Hawkes, Richard James, Alexander McQueen and Tom Ford.

“I have seen some groundbreaking shows this season from the likes of Craig Green and Wales Bonner, new designers with very bright futures. I’ve scouted other new resources I’m excited about,” he said.

Pask noted that ath-leisure remains a dominant trend. “The athletic influence in men’s wear is still as strong as ever, with interesting new iterations and technical fabrications being incorporated into the category.”

Nelson Mui, vice president and men’s fashion director at Hudson’s Bay Co., noted the week had a casual feel and said London streetwear has moved in a lot of interesting directions.

“With the exception of the sartorially-influenced sportswear line E. Tautz, the complete absence of any tailoring brands on the calendar gave the week a more sportier, casual vibe than usual.” Among the highlights for Mui were J.W. Anderson, Craig Green, Cottweiler and E. Tautz.

The week is not about business for Mui, who waits to place his buy in Paris. London remains relevant, however, because it’s so rich with ideas.

“It’s unrivaled for trend and talent spotting,” said Mui. “At least 50 percent of my focus is to see what the kids are wearing, who’s crashing the shows, the styling and the street theater. There’s a reason that the prestigious award prizes such as LVMH, Woolmark, etc., always end up with a shortlist of London men’s week’s top names,” he said.

Eric Jennings, vice president and fashion director of men’s wear, home and beauty at Saks Fifth Avenue, said the absence of some of the big brands allowed new talent to shine brighter.

“In the end, however, most of those brands may not need a runway show,” said Jennings. “London is about discovery. Although timing-wise it’s tough to get over here days after the holidays, it pays off for the brands that show because they are the first to get on our radar. And for new brands, timing is key and London gives them an edge.”

The season’s standouts for Jennings included J.W. Anderson, Cottweiler, Tinie Tempah’s new What We Wear collection, and Kent & Curwen. Jennings said while he scouts in London, the Saks buyers will place their orders in Milan, Paris or New York.

Benn McGregor, men’s wear buyer at Harvey Nichols, said he felt the city’s designers were in tune with current events and the precarious state of the world right now.

“Overbearing inspiration seems to be the current socio-political instability across the world. Every collection had a touch point towards the uncertainty we are facing; however, they each displayed a moment of light to contrast such a challenging time.”

While he didn’t make any new brand discoveries, McGregor said LFWM gave him the opportunity to see in a new light labels he didn’t think would be right for the retailer. In terms of the buy, he said Harvey Nichols places its orders in Paris and Milan first, and then returns to London.

Martine Rose was among the standouts for Dean Cook, men’s wear buying manager at BrownsFashion.com. He pointed to the minimalist modesty at Kiko Kostadinov, Songzio, John Lawrence Sullivan and Astrid Andersen; outerwear at Qasimi and Edward Crutchley, and military-inspired outerwear options from Liam Hodges, Maharishi, J.W. Anderson and Matthew Miller.

The city’s fashion week is definitely relevant. “It’s inspiring to see what young talent and emerging brands can do with a limited budget,” said Cook. “You see real creativity here and we’re very committed to supporting that.”

Karelis also believes London plays an important role. “To me, big brands need London to look cooler and more relevant as London will remain the city that creates the majority of the trends,” he said.