American and European buyers praised the results, pointing to designers’ craftsmanship and tailoring. 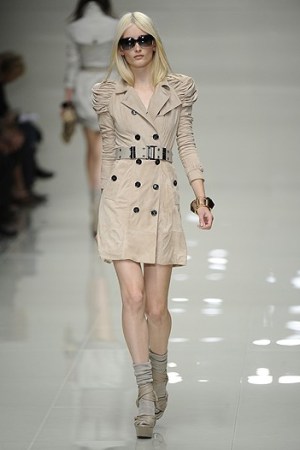 LONDON — American and European buyers — many of whom jetted in to mark London Fashion Week’s 25th anniversary — praised the results, pointing to designers’ craftsmanship and tailoring and singling out Burberry, Christopher Kane, Erdem, Antonio Berardi, Peter Pilotto and Mary Katrantzou as the week’s standouts.

Here is what buyers said about the season:

Marigay McKee, fashion and beauty director at Harrods: “I particularly liked the couture-esque minidresses at Antonio Berardi and the body-con dresses at Matthew Williamson. I also really liked Peter Pilotto and thought Jenny Packham’s collection was her best for awhile. We’ll be picking up Hannah Marshall, and we’re looking into picking up Marios Schwab and Antonio Berardi. I can’t say what our budget is for London, but it’s bigger than last season — double-digit bigger.”

Ed Burstell, buying director at Liberty: “There was plenty to buy: Christopher Kane was outstanding — just the right balance between sexy and flirty, while Richard Nicoll, Peter Pilotto, Mark Fast and Mary Katrantzou were all great. I thought Luella had her best season yet — it was very ‘designed’ yet commercial and we plan to buy a lot. Burberry was a knockout.”

Joseph Boitano, group senior vice president, general merchandise manager of Saks Fifth Avenue: “I loved Christopher Kane’s plaid and party dresses, and Peter Pilotto’s prints, shapes and architectural folds. I think Pringle is moving in a very positive direction. We took on Erdem and Marios Schwab for fall. Overall, our customers are excited about the young London designers in the store.”

Natalie Massenet, founder and chairman of Net-a-porter.com: “Luella had a true sense of wit and fun, and her looks work off the runway, too. I liked Peter Pilotto’s day-to-evening looks, Erdem’s impeccable dresses and Jonathan Saunders’ box-pleat skirts. Clements Ribeiro was divine and Burberry’s draped outerwear was beautiful — there were way too many coats to choose from.”

Nicole Fischelis, group vice president and fashion director at Macy’s: “The workmanship at Mark Fast and Kinder Aggugini was amazing. I liked Louise Goldin’s color sensibility and the way she treats sheer fabrics, and thought Clements Ribeiro had lots of fabulous items. Louise Gray had very interesting fabrics and prints.”

Erin Mullaney, buying director at Browns: “There’s been a celebratory mood to the week — and a lot of energy. The designers really softened up and got a lot more fluid this season. Christopher Kane’s shapes were very wearable — and gingham always sells. Meadham Kirchhoff’s sophisticated collection was so poetic, while Erdem’s collection was so special: He does all the prints himself. Jonathan Saunders’ had his best show to date.” Mullaney also praised Mark Fast, Mary Katrantzou, Holly Fulton, William Tempest, and Atalanta Weller.

Jemma Dyas, buyer at Browns Focus: “Emilio de la Morena was really strong. Mark Fast has moved on and progressed — I loved the suede ruffles on his dresses. Mary Katrantzou was incredible; I loved the blown-glass jewelry. London is always the place where I start seeing the shop taking shape. I start to see who is going to make the store look amazing.”

Sarah Lerfel, buyer at Colette: “I liked Erdem — it was so delicate and pretty. Mary Katrantzou’s collection really evolved this season. It is already very well received at Colette because it’s so special and unique. Mark Fast was great, as was Jeremy Scott.”