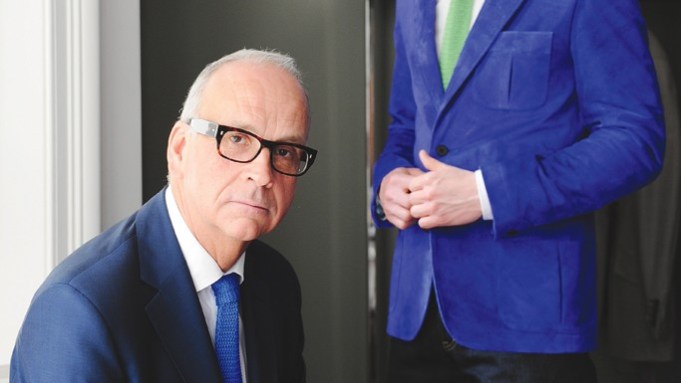 LONDON — The buttoned-up Englishman is back.

From high street to high-end to Savile Row, sharply tailored suits and separates are driving the British men’s wear business to new heights as the country’s brands and designers garner increasing attention on the international stage.

Designers, retailers and brands are at once fueling — and capitalizing upon — a desire from young, media-savvy men to look dapper, sophisticated — and solvent — in uncertain economic times. Mark Zuckerberg and friends take note: It’s time to stop dressing like a schlub.

The surge in dapper dressing here has dovetailed with the rise of London Collections: Men, which takes place June 16 to 18. Newcomers Burberry, Pringle of Scotland, Rag & Bone and Jimmy Choo will join labels including Alexander McQueen, Tom Ford, Richard James, E. Tautz and Christopher Kane in the three-day showcase.

RELATED STORY: Men’s Wear Designer Inspirations, Back to the Future >>

Brands on and off the London schedule, as well as consumers and retailers, are turning to tailored clothing. This time, however, the offer is lighter, more body-conscious and, in some cases, cheaper than ever.

On the high street it was Topman that followed its heritage and seized upon tailored suits with gusto.

“We recut and remastered the suit in more fashionable fabrics for a younger generation — and at high-street-level prices — and it has created a whole new arena for men’s wear,” said Gordon Richardson, creative director of Topman, adding that sales of Topman suits, with their slim silhouettes, are up 25 percent year-over-year and now represent about 15 percent of the Topman merchandise mix.

The average price for a Topman suit — some of which come with an option of long pants or shorts — is about 125 pounds, or $189 at current exchange. The brand also offers a luxe range of suits with more sartorial details; fabrics woven in Como, Italy, and longer jackets, priced at 225 pounds, or $340.

Topman isn’t alone. In the fall, Debenhams will unveil Hammond & Co. by Patrick Grant, a collection of suits, formal clothing and sportswear designed by the man behind E. Tautz and Norton & Sons on Savile Row. The range, which comprises about 70 designs across clothing and accessories, is pitched higher than Topman, with suits costing about 299 pounds, or $451.

Marks & Spencer is also beefing up its tailored-clothing offer. Come October, it will launch a “Best of British” capsule collection, which is sourced and manufactured entirely in the U.K.

The collection, for men and women, boasts about 100 pieces, including Prince of Wales check and Harris Tweed suits for men and women, Scottish cashmere and Yorkshire-made woven fabrics. Prices are 20 to 25 percent higher than the main M&S tailored-clothing collections.

At the high end, Burberry, Harrods and Richard James are all watching their tailored-clothing businesses rocket.

At Burberry, men’s wear and accessories generated more than half of the growth in the brand’s retail stores and concessions in the 2012-13 fiscal year.

“Our men’s business has outperformed all year long,” said the company’s chief executive officer, Angela Ahrendts, earlier this month following the results announcement. She added that tailored clothing was a top performer. “Guys are wearing suits again. And we see lots of potential in that business.”

At Harrods, made-to-measure is the fastest-growing segment of the store’s tailored-clothing business. “The trend for investment pieces and bespoke tailoring can be clearly seen on the men’s wear floors, echoing the trends for couture and one-of-a-kind pieces that are paving the way in women’s wear,” said Marigay McKee, chief merchant at Harrods.

He pointed to Armani as among the brands that have been strong performers for the store. “We will soon launch our ‘World of Burberry’ concept opposite these brands, and we are confident that this adjacency will be just as competitive,” Broderick added.

Richard James, who has built a multipronged business on tailored clothing — consulting on a line for Marks & Spencer, and stocking his more commercial Mayfair collection in stores such as Bloomingdale’s, John Lewis and House of Fraser — said a whole new tailoring category is rapidly opening up.

Sean Dixon, who cofounded the company with James, said they are witnessing the rise of the feather-light, casual, tailored jacket. “It looks like a formal jacket, but it has no canvas and no lining. It’s a jacket, but not one you wear to work,” he said. “And they still make the body look good.”

The jackets come in fabrics including a linen and cotton mix and raw linen, and Dixon said some of the fabrics are so light they’re almost transparent. They’re a challenge to make, he said, because they have to look just as good on the inside as on the outside.

Overall, Savile Row, the homeland of English men’s tailoring, is notching double-digit sales gains. According to Savile Row Bespoke, the organization that represents tailors on the street and in the immediate vicinity, total bespoke sales in 2012 were 30 million to 32 million pounds, or $45 million to $48 million, which represents a 28 percent increase since 2006.

Off the Row, Clive Darby, founder of the London men’s wear brand Rake, which shows at London Collections: Men, and which earlier this year opened its first shop on Duke Street in Mayfair, said his customers are rejecting suits in favor of tailored separates.

“We’re in Mayfair — hedge fund central — and when we opened the shop, I was expecting to connect with a consumer who had to wear a suit to work. But I realized that people don’t need a ‘business suit’ to do a billion-pound deal. These are men walking around doing deals on iPads,” said Darby.

Overall, business is up 26 percent over last year, with bestsellers including lightweight wool travel blazers and Swiss pique, long-sleeve shirts with chambray fabric inside the cuffs and on the underside of the collar.

While tailored clothing has been a major driver behind men’s sales in Britain, fashion-driven items have also been a motor behind the business. Topman has a broad offer that comprises denim in a variety of finishes and iterations, with skinny jeans still a big seller, according to Richardson.

The retailer is also collaborating with Agi & Sam, a new London men’s brand designed by Agi Mdumulla and Sam Cotton, who met while they were working at Alexander McQueen, on a small collaboration that will hit the shop floor in two weeks.

The duo, who are known for their quirky digital prints and eye-popping color palette, have done a 20-piece collection ranging from football shorts to suits called The Owls, after the avian-inspired prints that are featured in the collection.

“Luxury continues to evolve at a very fast pace, and there is a key focus across the fashion houses in Paris on pushing the men’s market at a faster speed than women’s,” said McKee. “We’ve seen huge growth coming from the power brands of the last decade and leading labels that have international appeal.”

Ed Burstell, managing director of Liberty, has such faith in the power of his fashion brands — which range from Christopher Raeburn, Agi & Sam and Lou Dalton, to Alexander McQueen, Paul Smith and Rick Owens — that he gives everyone equal billing on the shop floor.

“We have a very democratic allocation of space, and that way the smaller brands are not overwhelmed,” said Burstell. Besides, “the customers have made up their minds before they come into the store. They’re informed, they’re free spirits, and they are not afraid to make their own choices.”

The strategy has been paying off with double-digit growth in the division every year for four years, according to Burstell.

There are those who believe that it’s more than brands and retailers fueling the men’s wear fires, and that the media has played a huge role in the style surge.

“There is better coverage out there, more content and blogs. Everyone can find an outlet for what they like — not just the latest, trendiest fashion,” said Mats Klingberg, the founder and owner of Trunk Clothiers in London’s Marylebone neighborhood, which stocks suits by the Italian brands Boglioli and Barena Venezia, and a selection of American, British and Japanese brands.

He sends out a weekly online newsletter to keep his dialogue with customers alive.

“Men are interested in substance,” Klingberg added. “They want to know about the details, the craftsmanship, how and where a garment was made. They’re thinking more about purchases in the long term.”