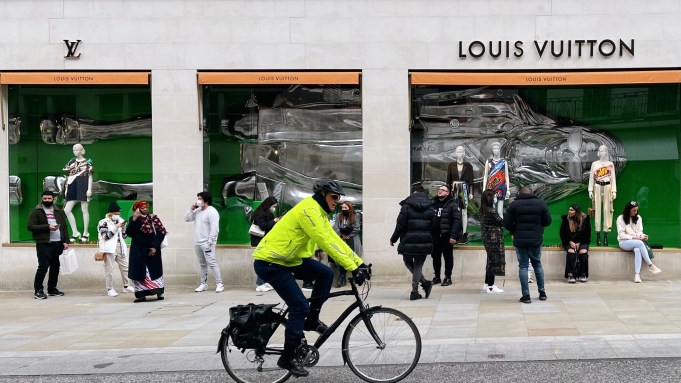 LONDON — Is the third time a charm?

The U.K. on Monday came out of its third — and strictest — lockdown, which had seen hospitality, nonessential retail — and even sitting on a bench with another person — restricted since last December.

But with fast vaccination rollouts and a dramatic drop in cases — there had been an average of 249 cases and three deaths a day in Greater London over the past week — it looks like Britons are ready to press restart.

While much of the excitement has been around the reopening of outdoor pubs — the U.K.’s most-treasured hangouts — fashion retailers have also pulled out all stops to welcome shoppers, and kickstart the recovery of the country’s high streets.

Pop-ups, flashy banners, new al fresco restaurants and design concepts all sent an optimistic message: In-person experiences and the brick-and-mortar store might be forever changed, but they’re here to stay.

The excitement on the streets was palpable from Day One, with crowds gathering outside stores ranging from Harrods and Chanel to Brandy Melville and Nike; shop assistants polishing countertops; parents and children waiting at the barbers to get a haircut, and people having breakfast and lunch at outdoor tables.

In central London, Liberty mounted a giant bright pink banner that read “Come On In,” while on Regent Street children are often spotted dancing outside the city’s famous toy store, Hamleys, which blasts music and covers its entrance in foam bubbles. Dover Street Market’s reopening was buzzing, too, and filled with longtime clients and their families.

At the Westfield mall, lines of shoppers have been snaking around stores including Zara, Apple, Nike, Primark, Gucci and Louis Vuitton. The site in west London has been busier than it would have ever been on typical weekdays, with teenagers — still on Easter break from school — wandering around, shopping bags and bubble teas in hand.

There are plenty of lines on Oxford and Bond Streets, too, from younger shoppers waiting outside Primark and JD Sports to luxury fanatics crowding outside Chanel, Hermès and Cartier.

Jia Wang, a Chinese student who traveled from Coventry to London on Monday morning to wait outside Hermès on Bond Street, said she was looking to buy a Picotin bag, as the style is usually sold out very quickly online. She was also planning to check out Chanel later in the day, arguing that “it’s a bargain” to purchase Chanel bags in the U.K., because they’re cheaper here than in China.

The new Browns also drew a sizeable crowd on reopening day, keen to check out the smartly renovated space and enjoying food and drinks provided by Native, the restaurant and café in the store’s courtyard.

On King’s Road, two teenagers, Gaby and Vi, rushed outside Brandy Melville early Monday. They said they were eager to socialize, shop and “see what things feel like, try them on.”

Nearby, on Sloane Street, Emilia Wickstead and her team were spiffing up the window displays and merchandising at the designer’s store. “It’s the moment we’ve been waiting for,” said Wickstead. “I’m shopgirl, and designer-in-residence today.” She said the store had already pre-booked a series of appointments, and was expecting walk-ins, too. Next week, they’ll be restarting in-person bridal appointments.

Men’s beach wear brand Love Brand & Co., another Chelsea resident, also debuted a new concept, adding a coffee garden and art exhibition to the store. It will now offer travel books, eco-conscious sun cream, ethically made chocolate, art and coffee to complement its beach wear ranges. Online travel-related purchases were up 300 percent this month according to the brand, which is building on the momentum by redesigning the store “to answer a holiday need in every corner.”

As for Cadogan Estates, which owns and manages a lot of those Sloane Street properties, they even went as far as to commission poet Ella Frears to write a poem that celebrates the joy and freedom of in-person shopping, to join in the reopening celebrations.

There have been some new openings, too: On King’s Road, the direct-to-consumer brand Dai opened a space, with the stories of its sustainable textiles or the accomplishments of its customers told across its walls and multiple in-store installations, while its basement was designed to double as a workout studio.

Savile Row tailors are putting on a two-week Theatre of Craft, which will allow passersby to watch the craftspeople at work through the stores’ windows: Walking down the east side of the famous street, one can watch the process of creating a garment from scratch. On the west side of the street, artisans are demonstrating the process of repairing a suit.

In this post-lockdown world, brands are making it clear they are ready to take on a new approach to retail that’s less about the transaction or gimmicky experience and more about collaboration and the social aspect of shopping.

Friends of the brand — Sean Lennon, Neneh Cherry and Grimes — have also curated a new playlist for the store, while filmmaker Alice Aedy will be streaming live discussions from the store on the label’s Instagram.

“We are handing over space to our #StellaCommunity friends. This is the start of a new global rollout — that sees Stella McCartney stores around the world become a hub for our #Stellacommunity, giving them space to connect, collaborate and create,” said the brand.

Selfridges enlisted sustainable label Pangaia — whose colorful tracksuits were popular during lockdown — to take over its Corner Shop and asked SoulCycle to open an outdoor workout studio behind its Oxford Street flagship.

“We have been connecting with and listening to our customers and we understand what they have been missing — experiences and inspiration. Whether it’s a new outfit to wear for that first dinner with friends this year, the shared experience of group exercise or simply coming into the store to be inspired by Good Nature in person — people are daring to dream again. It’s our job to make the world brighter through everything our stores and our digital channels have to offer,” said Andrew Keith, Selfridges’ managing director.

Upon reopening, a Selfridges salesperson told WWD that the store never really stopped selling to its customers during lockdown via messaging apps. Now that the physical store is open, though, walk-in customers are expected to bring in more business, and the reopening will also encourage those who prefer to try on items to spend more liberally.

Harrods turned its focus to fashion, with pop-ups by Hermès, Givenchy and Loewe all coinciding with the store’s big reopening. Hermès opened a dedicated boutique of women’s ready-to-wear, shoes and accessories — the first of its kind outside its own boutiques — while Givenchy unveiled a space designed by Matthew Williams in collaboration with artist Ewan Macfarlane in the men’s department. Loewe debuted the latest iteration of its Paula’s Ibiza range. Later this week, the luxury accessories brand Au Départ will open a corner at Harrods.

On Monday, there were long lines outside Harrods’ many doors: “I’ve been working with a Harrods virtual shopper these last few months and have had clothing delivered to me, but now I can’t wait to actually browse and see the items in-store — seeing is believing,” said Charlie Chang, who was waiting outside the Knightsbridge store.

Another Harrods shopper, Jude Edri, said he was planning to pick up a pair of Chanel sneakers that were only available in-store. Two other shoppers-cum-resellers, Euan and Jeffrey, said they were hoping to pick up Nike Air Jordans and Yeezy sneakers. “It’s easier to buy them in-store rather than online,” they said.

With the majority of consumption set to continue taking place digitally, “identifying and meeting [these] new in-store expectations” is where the growth opportunity lies, according to McKinsey & Company’s senior partner Eric Hazan. “Seventy-two percent of consumers have changed stores, brands, or the way they shop. And many of these behaviors appear set to stay.”