Stepping into the new Links of London store in New York’s SoHo, the first thing in sight is the charm bar. There, customers perched on Italian leather stools can peruse prices and descriptions on a charm “menu” fit for a cocktail... 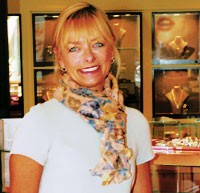 Stepping into the new Links of London store in New York’s SoHo, the first thing in sight is the charm bar. There, customers perched on Italian leather stools can peruse prices and descriptions on a charm “menu” fit for a cocktail table and create their own bracelets.

“If we can seat you there, we can sell you,” Sharon Buntain, the firm’s first North American chief executive officer and president, said of the area.

But therein may lie the British company’s biggest challenge: getting the customers to consider Links. As it begins its aggressive push into the U.S. market, Links is faced with the task of establishing a distinctive, and perhaps new, brand identity for the American consumer. Its highly visible store on West Broadway in lower Manhattan is just the start.

The 1,300-square-foot space, which officially opens Wednesday, is the first of 10 to 12 stores Links plans to open in the U.S. in the next four years. The U.S. accounts for 10 percent of the business, but Links owner John Ayton, who founded the brand 14 years ago with his wife, Annoushka Ducas, said he’d like to see that increase to at least 30 percent in the same time frame. Wholesale business here should also reach 100 accounts by 2007, up from its existing 30 accounts.

In the past two years, Links has reported 21 percent growth, and Ayton anticipates $50 million in sales in 2005.

“The business is very strong domestically in the U.K.,” Ayton said in a phone interview from Hong Kong, where the brand has a solid following. “And that gives us a very strong base to go abroad.”

After the grand opening of the SoHo store, Buntain, who had been the North American president and ceo of Lalique since 2000, will turn her attention to the wholesale business. Saks Fifth Avenue will begin carrying the brand in its Fifth Avenue store midmonth and a new branded space is being created inside Hall’s in Kansas City.

Then, in June, Buntain will open a Links store in the Short Hills Mall in Short Hills, N.J., and another soon after in Oyster Bay, N.Y. She also is considering cities in Southern California and south Florida and Chicago for stand-alone boutiques. Retail accounts for 75 percent of the brand’s business.

The quality and product design is in place for growth, Buntain said, as is a solid sales team, including Ellen Eisen, president of U.S. wholesale operations, who came over from Michele watches, where she was director of sales. Now it’s just about marketing.

“It’s hard work, but there are no negatives to be overcome,” Buntain said. “The only negative I have to face is a lack of brand awareness.”

Since coming to the U.S. three years ago, Links has maintained a quiet presence in the market with 30 wholesale accounts and two retail stores — both in New York, on Madison Avenue and Park Avenue. The firm has 37 stores worldwide. However, all has not been its wont, Ayton said.

“We’ve learned a lot, we’ve made a few mistakes,” he said. “Our product has changed a bit, we’re now 60 percent jewelry [the rest is watches and gifts]. When we entered the States, it was closer to 40 percent. We’ve seen a good opportunity in the bridge jewelry market.” Ayton added that watches have been an important category for the American customer.

Last June, the company began to boost its jewelry offerings with an 18-karat gold and diamond collection. Ayton expects the fine jewelry collection to be the driver of the business in the next few years and account for 40 percent of sales.

“I see ourselves as the Coach of the jewelry market,” he said, referring to Links’ positioning in a marketplace that includes firms such as Tiffany & Co. “I admire very much what they’ve done. [Coach] has a very distinct niche within a very crowded marketplace. I think they do extremely well in terms of the way they’re turned onto fashion, but they’re not at the über-luxury level. They’re just a shade below. They’re delivering wonderfully designed product at an affordable luxury price. And I think that’s where we pitch ourselves in the jewelry sector.”

Links’ items retail from $60 for a sterling charm to $7,500 for the gold Sugarcane necklace. The selection includes sterling silver baby frames and rattles, women’s and men’s watches and the new gold and diamond collection that includes fashion-minded designs such as the spiraled Cocoon suite. But what Links has become most recognized for is its whimsical and often cheeky point of view on luxury. Take, for instance, the sterling fish-and-chips forks, the cell phone charms, the leather and sterling tic-tac-toe board and a tiny silver champagne bottle of bubbles.

The charms continue in that tradition of playfulness. Designs include letters and figures from the racy (one pair of underwear reads “Lucky Knickers”) to the quintessentially New York (the Statue of Liberty). About 80 vintage English and French charms have been brought in especially for the store, as well. Letters retail for $60 and a pink-sapphire pavé bra charm retails for $395. Buntain envisions gaggles of girls young and old playing at the bar and would like to host private events such as bridal party champagne breakfasts there.

However, she is well aware of the dangers of becoming too tied to one product. “It’s taken three to four years to get out of being a cufflinks brand,” she said, “and the trap is we don’t want to fall into being a charm brand.

Links’ new London flagship in Sloane Square is the only other outlet to house a charm bar setup, and Buntain said there are no plans to include them in future retail stores.

Ayton expects the SoHo outlet to bring in $2 million in sales within the first year.

“We’re pioneering a brand here [in the U.S.],” Buntain said. “It’s a different kind of selling when you have to introduce a whole concept. It’s not, ‘How many? What color?’”