This was not a day for big-ticket purchases, or investment dressing. As stores reopened after more than two months, Londoners were looking for discounts and deals.

By Samantha Conti and Natalie Theodosi and Tianwei Zhang on June 16, 2020
View Slideshow 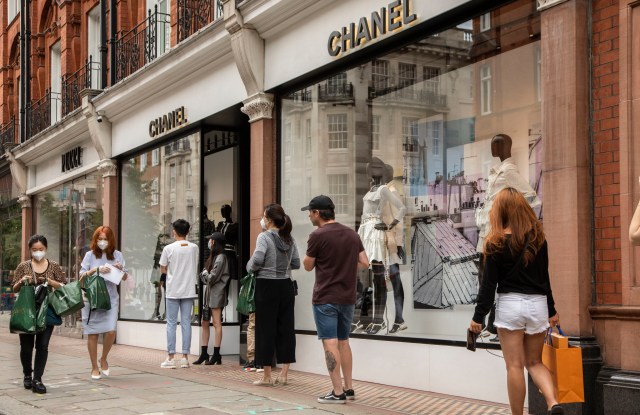 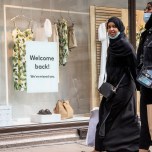 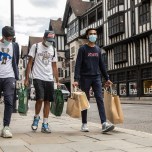 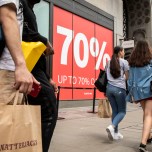 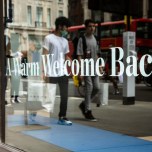 LONDON — Sneakers, makeup — and bargains — topped shoppers’ lists as stores here reopened on Monday, part of the British government’s slow process of unlocking business and an economy devastated by COVID-19.

Although all shops were permitted to reopen on Monday, and the weather was glorious, central London still felt empty. There were lines outside stores from Knightsbridge to Oxford Street to Soho, but they were manageable and moved quickly. Noticeably missing were the international tourists, who are the lifeblood of London retail.

According to a report last week from Britain’s Office of National Statistics, just 37 percent of people reported feeling safe outside their home due to fears about contracting COVID-19 and potentially infecting others. But that risk — along with stringent social distancing regulations, extra police on the streets and guards inside and outside stores — did little to deter some of London’s die-hard consumers.

On Monday morning, as they waited to get into stores or wandered around the mostly empty floors, many people said they have been desperate to get out of the house and have a real-life shopping experience once again.

“I missed the food hall and the hair salon and cannot wait to have a manicure and a pedicure. I want to have a look around the kids’ section and buy more sports clothes, too,” said Sarah Bertrand, a Knightsbridge resident, as she prepared to follow fellow shoppers into the Basil Street entrance of Harrods.

She’ll have to wait for the mani/pedi, though, as high-touch personal services won’t be available until early July at the earliest here. Compared to other European countries, Britain was late in locking down, and one of the last to unlock. There have been nearly 42,000 deaths here so far, from the coronavirus, one of the highest rates in Europe.

Bertrand said she was also eager to tour the store and “see things with my own eyes.” She said that online shopping has, at times, been frustrating because the images can sometimes be misleading, “which means you’re sending packages back and forth, with so many returns.”

At certain points in the morning, lines snaked around the store, but they moved quickly, with customers disappearing into the vast building, which has more than one million square feet of selling space and is one of the largest department stores in Europe.

As reported, to enable maximum social distancing and cut down on crowds, Harrods will next month open an outlet store for its summer sale items at Westfield London.

The retailer wants its Knightsbridge flagship to focus on new season items, and is currently running a major fragrance campaign in-store, entreating customers to “Find Your Joy, and Spritz It.” Later this summer, Harrods is also planning to host a pop-up dedicated to the Dior fall 2020 collection.

The Dior pop-up, which will run from Aug. 1 to 30, will be decorated with LED lights inspired by Maria Grazia Chiuri’s runway set, created by the Claire Fontaine Collective.

Harrods, like its luxury peers, opted for signs (branded in the store’s signature olive green) reminding customers to stay two meters apart; to respect the one-way system in certain parts of the store; to use hand gels provided and, in departments such as beauty, to “Browse with your eyes only, please.”

All of those rules didn’t stop Xuan Tran from heading to the beauty rooms to try out some fragrances. She was shopping with a friend and both were wearing masks. “We were so bored at home, we just wanted to come and take a look. We’re going downstairs now to the Estée Lauder counter,” she said.

One of the busiest parts of Harrods was the food hall, with its fresh fish, cheese and charcuterie counters, bakery, rotisserie, and green juice stations. Staff were dressed in regulation green aprons with matching face masks, and served customers food to go. None of the restaurants has reopened.

Nearby, at Harvey Nichols, beauty was also top of the agenda for some shoppers, including Karma Nsouli, a local resident. “I’m here for makeup — everything is sold out online — and it’s nice to get out of the house,” she said.

“The most important thing for us is making people feel safe, comfortable and not overwhelmed,” she said, adding that Harvey Nichols has been offering customers the chance to pre-book personal, in-store shopping appointments while the store is still relatively empty. She said Harvey Nichols hasn’t “over-promoted” the reopening because people still need to grow comfortable with shopping again.

By lunchtime, Selfridges was filling up with customers of all ages and nationalities, many of whom were looking for bargains — at the makeup counter and in the sneaker area of the men’s floor.

“I’m looking for a pair of sandals — and anything that’s reduced,” said Elsie Debrah, adding that she was relieved to “get a bit of exercise,” and not have to shop online for one. Fellow shopper Jolin Li said she was on the hunt for discounted cosmetics, while Mike Bakare, who was lining up to buy sneakers, said he was looking for “deals” on brands including Nike, Adidas and Air Jordan.

A few minutes’ walk east, Oxford Circus was slowly getting back to normal. There were lines outside Apple, Nike, Cos, Kiko and Zara, but Uniqlo and Gap were still closed, and TK Maxx said it was preparing to open in the coming days.

On Regent Street, brands including Arket, & Other Stories and Coach tried to lure shoppers with the promise of discounts. Coach put a big 60 percent off sign — and a bunch of bags — right at the entrance to its store. At Liberty, designer ready-to-wear, some jewelry, and items from the retailer’s eponymous in-house label, are 50 percent off.

Dover Street Market in Haymarket welcomed shoppers by-appointment. Those who didn’t have one needed to wait for a salesperson to escort them around — there was no wandering allowed.

The store provided free masks, gloves, and hand sanitizer on every floor, and people handling garments or trying them on were asked to wear a mask and gloves.

Liang Zhu, a fashion student, bought a Raf Simons sweater, which was 50 percent off. He said he was shopping with friends, and they were planning to walk around town to check out some streetwear brands.

In Mayfair, most luxury brands opened their doors, with the exception of Mikimoto, Graff, Vacheron Constantin and Vivienne Westwood. There were long lines outside Chanel and Hermès, and shorter ones in front of Louis Vuitton, Cartier and Tiffany & Co. Other brands’ stores were quiet, especially Burberry and Celine.

Around Carnaby Street, the sneaker retailer Size? had a line of around 15 people, as it was only allowing 10 customers into the shop at a time. It required mandatory hand sanitization while shoppers needed to follow the arrow marks on the floor to navigate their way around.

Nearby, Wing Tsang, an international business student at Birmingham University, bought two Comme des Garçons Play T-shirts from End, the streetwear store in Soho. She traveled to the British capital on Monday with her classmate, and the two planned to check out Selfridges and Dover Street Market as well.

These smaller stores have found various ways of walking the line between commerce and safety in these unusual times: Machine-A requires an appointment to enter; Champion only allows people wearing a mask in, while Colmar has set customer capacity at five.

On the other side of town, at Westfield London in Hammersmith, groups of teenagers lounged in the sun with cold drinks, and were surrounded by multiple brown paper Primark bags.

“We wanted to get out and to buy some clothes for summer, but on a budget,” said Maria Freitas, a high school student who had been shopping at Primark and JD Sports with two friends.

H&M, Zara, Apple and the clearance stalls at Foot Locker were some of the other stores that drew small lines outside their doors.

With the exception of high-street giants, most of the commotion was happening outside Pret A Manger or the bubble tea stands, with people more concerned about socializing and enjoying the sun outdoors at the vast shopping mall.

In the more premium part of Westfield, where the beauty and luxury stores are located, there were barely any shoppers in sight, and some brands, including Tory Burch, Mont Blanc, Bucherer, Stuart Weitzman, Monica Vinader, Thomas Sabo, Deciem and Urban Decay, remained closed.

The few luxury stores that did open their doors, such as Mulberry, Jimmy Choo, Versace and Burberry, were empty around midday, with the exception of Gucci and Louis Vuitton, which drew small groups of shoppers.

“We’re mostly browsing and looking to see what will go on sale and when,” said Tara Matthews, who had her husband and children in tow.