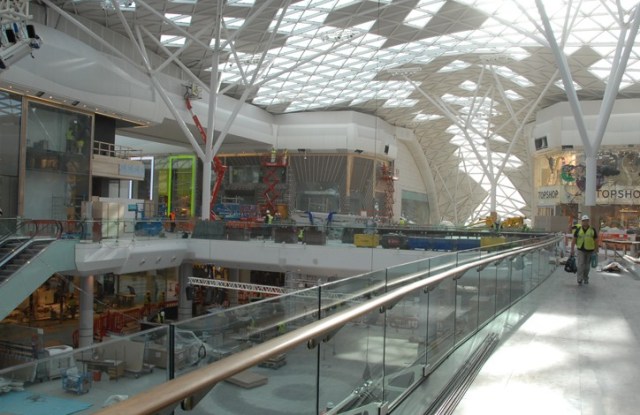 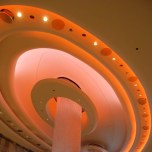 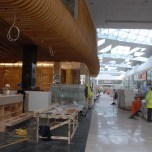 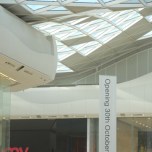 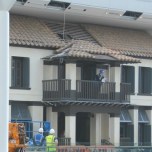 The 1.6 million-square-foot mall, located in the northwest London neighborhood of Shepherd’s Bush, is a groundbreaking project in the U.K., where most shopping centers lie on the outskirts of towns and feature mainly high-street chains, few luxury stores and standard food courts peddling pizza and fried chicken fingers.

Westfield’s principals say they aim to give Londoners a service-oriented retail experience, and a one-stop shop in a city perpetually plagued with traffic, a daily $12 congestion charge and parking that can cost up to $14 for two hours in the center of town. All figures have been calculated at current exchange.

And while the U.K. economy is catching the chills like the rest of the world — with property prices plummeting, inflation rising, banks in crisis and a glum consumer — the new mall’s owners are absolutely confident they will succeed. “We have opened in the depths of recessions and in the heights of booms, and we know that retail is a cyclical business. We are creating space for the long term,” said Michael Gutman, Westfield’s managing director, U.K. and Europe.

On the mall’s ground floor, the shop windows are 13 feet high, while on the floor above they are 26 feet and comprise a mezzanine level. The mall itself is divided into categories such as luxury, children’s, home, urban chic, streetwear and high street.

The mall will also host a number of new names in Britain, including Abercrombie & Fitch’s Hollister brand; Italian legwear chain Calzedonia, and Ugg Australia, which will open its first European unit at Westfield. A Westfield spokeswoman said the catchment area is 2.7 billion people, and the company is expecting upward of 20 million visitors annually, including foreign and British tourists.

As part of the project — and with help from London’s taxpayers — Westfield has also invested in a new subway station near the site, and upgraded over ground, underground, and bus links to the mall.

Gutman said he wants the Westfield experience to be a 3-D, emotional experience. “I hope it creates a vibrancy and an excitement that will be uplifting and punctuate — somewhat — the current environment here,” he said.

He added that two of the great draws of Westfield would be choice and convenience. Gutman pointed to the upscale supermarket Waitrose, which is one of the anchor stores; the gym and spa; the string of alfresco restaurants on the mall’s Southern Terrace, and special services including valet parking, home delivery in the greater London area, and a hotel-grade concierge service. The new Westfield mall will be “all things to all people,” he said, offering shoppers a “mini-London” without the hassle of parking or congestion charges.

There are those who heartily disagree with him: Over the past few weeks, the project has taken a beating in the famously antagonistic British press. Writing in the Sunday Telegraph, the novelist Margaret Drabble said the mall would be “a disaster” because of the economy and because increasing numbers of people are shopping online. A columnist in The Evening Standard called it “the retail equivalent of the neutron bomb,” that would destroy the organic shopping life in the neighborhood and create traffic chaos.

But Gutman said London desperately needs the new space. “We believe there is an undersupply of quality retail floor space in London, and our results today validate that. We are 99 percent leased, at our budget rents, and we’ve achieved the retail mix we wanted,” he said.

He added Westfield was also pushing the envelope with The Village, the 270,000-square-foot luxury area of the mall, designed by Michael Gabellini, partner at Gabellini Sheppard Associates LLP. The Village boasts cascading crystal chandeliers, a Champagne bar, and brands including Vuitton, Prada, Mulberry, Gucci, Versace, Tiffany and Co., De Beers and David Morris. “This will be the first time that luxury retailers are even in a mall in the U.K. It isn’t something they are accustomed to,” he said.

A Gucci spokesman said Westfield London is creating a new opportunity for luxury brands. “Given its proximity to prestigious residential London neighborhoods and the presence of all the major luxury brands, Westfield is creating a new ‘off-center luxury destination location’ which is similar to luxury mall concepts in other regions of the world,” he said, adding the store would be directly owned and operated by Gucci and feature the new store design by Frida Giannini.

Burberry is unveiling its store in The Village on Dec. 1, and a company spokeswoman said the opening is part of a “flagship cluster strategy” in high traffic, high demographic markets. “Much like Boston, where we now have five stores, we feel markets like London, where there is a large luxury base, in addition to a tourist or transient consumer, will be more resilient” during times like these, she said.

Maureen Hinton, a lead retail analyst at Verdict Research here, said she thinks the mall will be a success — to the detriment of other shopping areas in London, such as Kensington High Street and the West End.

“Westfield offers the convenience of everything in one place, easy access and parking. The fact that it’s new and offers different brands will also attract people. However, it won’t create a new spend among consumers — it will only spread their spending,” she said.

Despite the bleak news about the economy, retailers — especially in the luxury area — are caught up in the excitement of the project.

Over the past year, Vuitton has increased its space in The Village to 5,000 square feet from 3,000 square feet, and will be stocking men’s as well as women’s wear. Louis Vuitton already has units at Westfield’s malls in the U.S. in Paramus, N.J., and Century City, San Diego and Santa Clara, Calif.

To mark the opening of its 1,331-square-foot store in The Village, Mulberry is collaborating with British artist Jonathan Ellery, who has made two solid brass sculptures that show the components of the best-selling Bayswater Bag and the tools used to make it.

At the packed opening ceremony Thursday, London Mayor Boris Johnson called the mall “a fantastic vote of confidence for London,” and singer Leona Lewis performed. Later in the day, during a VIP lunch for 500, Westfield chairman Frank Lowy admitted this was “not an ideal moment” to be inaugurating a megamall. “But we are optimistic about the future. We want this to be a beacon for retail in the U.K.,” he said.

And while the paint has not even dried in Shepherd’s Bush, the company is already at work on its next project, Westfield Stratford, a 1.5 billion pound, or $2.3 billion, complex of shops, offices and hotels that will open in East London in 2011, in time for the next Summer Olympics in 2012.