The move will see the two retail platforms for independent designers merge online. 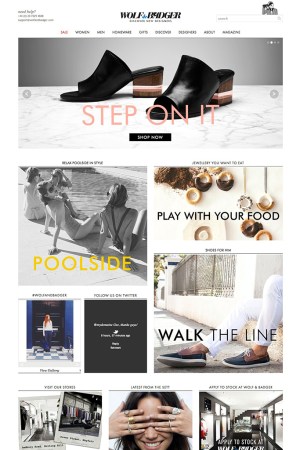 LONDON — Two London businesses that have made their names championing independent designers are joining forces.

Wolf & Badger, which showcases and retails emerging designers’ collections in its London stores and on its Web site, has acquired Boticca.com, an online marketplace for emerging accessories designers.

As of Friday, visitors to the Boticca.com site will be redirected to wolfandbadger.com, and Wolf & Badger will carry an edited selection of the labels on Boticca.com on its own site.

The financial terms of the deal were not disclosed. Boticca.com’s founder and chief executive officer Kiyan Foroughi will remain at the company as an adviser to the business, which will be led by George Graham, ceo of Wolf & Badger, and Henry Graham, creative director, who are brothers. They will also bring a number of staff from Boticca.com to work at the merged business.

Wolf & Badger acts as a marketplace rather than a traditional retailer. It charges designers a fee to create a retail space online and in its stores in London’s Notting Hill and Mayfair, and the designer earns the full retail price of its products sold through the platform, minus an 18 percent administration fee. Boticca.com, meanwhile, operates by connecting customers with accessories and jewelry designers from 40 different countries online, and handling practical elements such as payments and shipping.

Wolf & Badger said that the acquisition will strengthen its online capabilities and its global reach online. The new business will carry around 600 labels and have a customer e-mail database of over 800,000. The firm also has plans to open a brick-and-mortar Wolf & Badger store in New York, in spring 2016.

George Graham of Wolf & Badger commented that the two businesses “have long shared a vision to provide independent brands with the opportunity to gain the global reach and scale previously reserved for only the largest and best-capitalized luxury fashion brands,” adding that the merger will allow the firms “to introduce many more customers globally” to the designers they carry.

Foroughi of Boticca.com added that the merger would combine “Boticca.com’s strength in the online world with Wolf & Badger’s established off-line presence.”