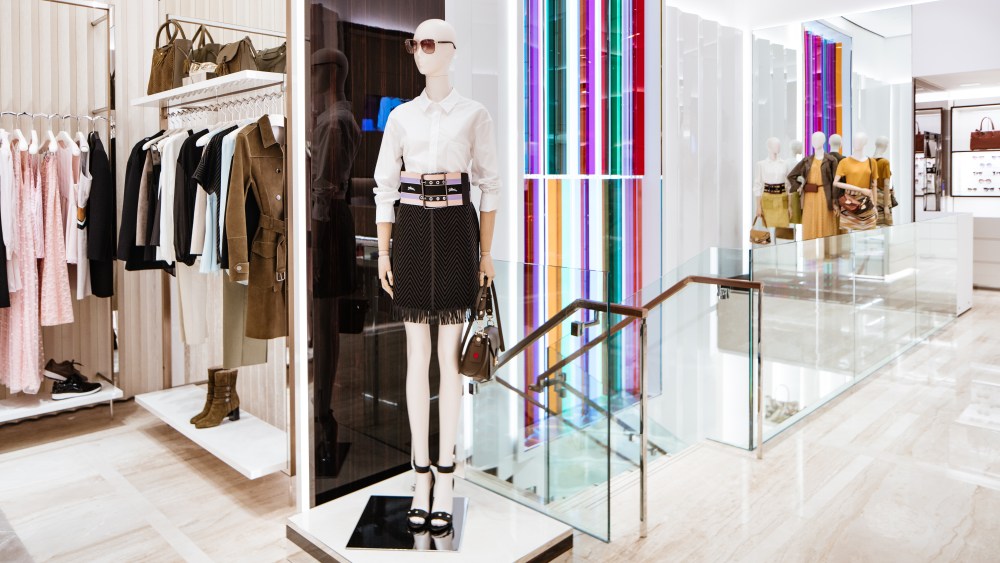 NEW YORK — Longchamp, which marks its 70th anniversary this year, has come a long way from its origins of making leather coverings for tobacco pipes. A potent symbol of the brand’s progress is the two-level, 4,000-square-foot flagship at 645 Fifth Avenue here, which had a soft opening last week and officially bows on May 3.

The store is big enough to offer the widest range of Longchamp’s collections in the U.S., including women’s handbags, ready-to-wear, shoes, leather accessories, men’s and luggage.

The ambition to be seen as a fashion brand is given full voice at the flagship, which features a dedicated space for rtw and shoes smack dab in the center of the main floor. Leather handbags and seasonal styles from the brand’s signature Le Pliage collection are displayed on the main floor with small leather goods and the new sunglasses collection. The family-owned French leather goods house in February 2017 signed a licensing agreement with Marchon Eyewear Inc. for sunglasses and optical frames, which will be rolled out to Longchamp’s other flagships and optician stores internationally following the Fifth Avenue launch.

While Longchamp USA president and chief executive officer Stephanie Disegni declined to divulge a sales projection for the store, she said, “It’s an aggressive plan,” said Disegni. “It’s a big store and it’s on Fifth Avenue.

“Our brand is definitely experiencing a moment of excitement,” Disegni said. “We’re one of those brands that people may not have been so aware of. There are the big [players], the Guccis and Pradas and Chanels. Then there are the American brands, Coach and Michael Kors and Tory Burch. We play in this white space between those brands.”

While Longchamp is content with its enormous Le Pliage business, it aspires to rise above the entry-priced collection to compete in the luxury realm. Le Pliage nylon bags are priced $145 for the L style tote, $125 for the S tote and $115 for a top-handle tote. The strategy centers on rtw, which is displayed in a self-contained area delineated by an ecru-colored area rug and comfortable seating. The apparel is available in about 40 stores worldwide out of 300, said Longchamp’s artistic director Sophie Delafontaine.

“It’s selective distribution,” she added. “I didn’t want to have it everywhere in every type of store. I want the woman buying rtw to feel that she’s in a very warm environment. There’s an opportunity for us to show rtw in the U.S. market and develop it and maybe start to express something stronger.”

Delafontaine said the 150-piece collection gives the brand the opportunity to speak to a luxury consumer. “Working with leather is something very strong at Longchamp and I wanted to show all the ways that we can use it in rtw,” she said. “I wanted to treat it in a luxurious, refined and very sophisticated way. Leather is a unique luxury product and the rtw and shoes is a luxury collection. The woman who buys the rtw is a luxury [consumer].

“The idea for the rtw was to develop the whole feminine side of Longchamp,” Delafontaine added. “Even in the U.S., we’re very well-known for our Pliage bags, but that’s only one part of our business. We have a strong collection of leather handbags and the rtw is another way to develop the feminine fashion side of Longchamp. Everything is made in France and Italy using beautiful fabrics and leather.”

Highlights from the house’s Seventies-flavored fall 2018 collection include long fluid dresses in a horse bridle print and, for outerwear, striped mixed-media furs, army jackets with shearling collars and fringed jackets. “It’s this idea of an Amazon woman of modern times, a woman who is ultrafeminine but strong,” said Delafontaine.

Longchamp designed its first women’s leather handbag in 1971, but its breakthrough came with the launch of the Le Pliage collection, originally made from nylon with cowhide flap closures and handles. Le Pliage Cuir, a leather line, features seasonal styles such as a cream-colored leather tote with zigzag stripes for $575. Mademoiselle Longchamp, a structured shoulder bag with a perforated front panel and nickel hardware, pushes the higher-end price range at $1,440 for a style with suede stripes. A beige leather dress with multicolored chevron stripes sells for $2,555. A Parisien black leather jacket costs $1,640. A rust-colored Saint Germain dress with a swiss dot overlay costs $1,165.

Personalization is a key element of the Fifth Avenue Longchamp flagship. On the lower level there’s a floor-to-ceiling display of Le Pliage colors, shapes and sizes. “We have a very substantial area — almost half the lower level — dedicated to Le Pliage in leather and nylon,” said Disegni. “We haven’t had personalization anywhere in the U.S., until now. We have two bars where customers can personalize a Le Pliage nylon or leather item with their initials or name or some iconic symbol.”

An inspiration corner shows examples of typefaces, thread-colors and emblems available. An embossing machine can imprint a leather Le Pliage product with a consumer’s name, initials or emblem. Other elements to choose from include the color of the snap on the front flap and hardware.

Delafontaine said Longchamp began personalizing La Pliage products in 2005 or 2006. “It was only online at first,” she said. “Now we see it’s very important to give this option inside the store. There are thousands of options. We produce them one-by-one in our factory in Segré, France. We have one of our main workshops there and dedicated workshop for the personalisation of La Pliage.”

Disegni said the Fifth Avenue staff is trained to work with consumers to personalize their products. “It’s one-of-a-kind and done on a tablet,” she said.

Highlights of Longchamp’s 10-plus year partnership with Jeremy Scott are displayed on the lower level and include a Le Pliage tote with the image of Marilyn Monroe with the words “As Seen on TV”; a pattern of Empire State building-shaped ice pops, and a tote that reads, “Viva Avant Garde.” “We’ve been known to do collaborations,” said Disgeni, citing Sarah Morris, Tracey Emin, Kate Moss, Mary Katrantzou and Mr. Bag.

“There will be some product in Fifth Avenue that’s not in any of our other stores in the U.S.,” Disegni said. “Since it’s 4,000 square feet, we can put everything in that store where we may not be afforded that luxury in smaller footprints.”

Nearly half of the lower level is devoted to men’s and travel. “We’re showing men’s and travel classifications in a major way,” Disegni said. “The men’s area is very masculine with a dark brown marble floor, leather seating and a leather-topped table. It looks very rich and inviting and will show that we’re really in this business and it’s not relegated to a corner.”

“Transchromie Mécanique Aléatoire,” an artwork by Venezuelan artist Carlos Cruz-Diez that hangs between the main floor and lower level, captures a sense of motion with its colorful optic aesthetic. Longchamp sees a synergy between the Cruz-Diez work and the flagship’s facade, which is made of layered rows of protruding metal ribbons that seem to be floating or swaying in the breeze despite being rigid. The design for the facade was introduced at Longchamp’s new Shanghai flagship.

The Fifth Avenue location is Longchamp’s third unit in Manhattan, after 713 Madison Ave. between 63rd Street and 64th Street, and 132 Spring St. in SoHo, and replaces a smaller footprint in Rockefeller Center’s Channel Gardens.

“The lease was up a couple of months ago, which prompted us to look on Fifth Avenue,” Disegni said. “We did very good business [in the old store]. We wanted something to put our best foot forward on Fifth Avenue, where there’s so much foot traffic with tourists both domestic and international. We think we struck a very attractive deal.

“Madison Avenue will stay open for the time being and we’ll decide what happens,” she added. “We haven’t made a final decision. We also have a leased business inside Macy’s and two wholesale locations at Bloomingdale’s on 59th Street and in SoHo.

“The idea to open a Fifth Avenue flagship came also when we opened our store on the Champs Elysées. We couldn’t have imaged how impactful it would be to have a store on the Champs Elysees,” said Delafontaine. “It’s more than a store window in Paris, it’s a window on the world. In New York, we have the same type of store as in Paris.”

Longchamp, which unveiled its first Canadian store this year and opened a location in Tokyo last month, is looking at “all the major U.S. markets,” Disegni said. “The brand is getting a little more known and little more notoriety. People are looking for something different. We’re opening a store in Los Angeles in September at the renovated Beverly Center. Other key cities that we’re missing include Houston and Chicago.

“We’re kicking off our 70th anniversary with the Fifth Avenue opening. There will be some other events rolling out throughout the year,” she said. “We’re doing a big party during Paris Fashion Week in September to celebrate the anniversary.”

Other developments will include a collaboration, but Disegni was mum on whom the partner might be.