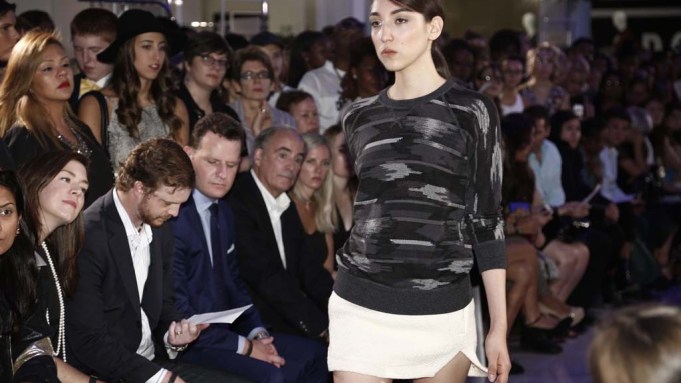 No hot items. Few new trends. Shoppers are bored and would rather spend on technology or the home.

Department stores have been going through that litany of complaints for the past few seasons — and now they’re trying to do something about it. They aren’t only chasing younger customers; now they all want younger, up-and-coming designers, too.

Stores from Bergdorf Goodman to Macy’s, Lord & Taylor to Bloomingdale’s are eager to snap up young labels as they rush to inject newness into their selling floors and jump-start women’s apparel sales, which have been on a steady decline for the past few seasons.

Their hope is that by offering at least a few under-the-radar brands, it will polish what they already have in their stores.

Take Lord & Taylor as an example. Just as fashion week was revving up, about 450 thirtysomethings packed the second floor of the retailer’s Fifth Avenue flagship for the opening of the Brand Assembly concept shop Thursday night. The 1,000-square-foot space, showcasing emerging and advanced contemporary designers, drew a demographic not often seen en masse at the store.

“These are designs you’ve probably never seen before. They’re so innovative,” Lord & Taylor’s fashion director Stephanie Solomon said during the Brand Assembly fashion show, coordinated by L&T and Web site Refinery29, further proof that the store is rushing into the modern era.

On the runway were strong prints, maxidresses, short skirts with side slits, texture and colorful knit tops with an overall feminine and flirty appeal. The Brand Assembly shop has a rotating mix of 20 creators, 75 percent New York-based, among them emerging designers Calla, Priory of Ten, Michelle Kim, Daniella Kallmeyer, Maria Dora, Saunder, To Be Adored, Etelka and Oliveve. Established designers include Sachin & Babi and Torn by Ronny Kobo. The average ticket is $350, with the range from $60 to $3,000.

“They each have their own vibe and can be mixed and matched,” said Hillary France, cofounder, with Alex Repola, of Brand Assembly, which runs a Los Angeles trade show four times a year for contemporary fashion, and helps emerging designers and brands operate their businesses and develop infrastructures.

“We are trying to create environments that give small brands an opportunity,” Tony Spring, Bloomingdale’s chairman and chief executive officer, told WWD. “It’s not our natural tendency, but it’s something we know is vital to the customer and is part of the history of this brand. It’s something we have done less strongly lately, but we are going back to our historical roots. We need a space for this in every family of business. Ready-to-wear has Paradox. Designer has Elements. Men’s has the Lab.”

Back in July, Spring hosted young designers participating in the CFDA Fashion Incubator program, giving them a tour of the 59th Street flagship, then sliders and mac and cheese at Flip, the store’s hip hamburger joint, and conducting a Q&A.

“I would love some more hot trends in women’s that we can draft off of,” Macy’s president Jeffrey Gennette said at last week’s Goldman Sachs investor conference. “There isn’t enough newness in the ready-to-wear world right now, that is [the] go-to trend, the go-[to] item, that can really fortify a customer’s reason to come into a store, buy that item and buy everything else that makes that item complete.…Hot trends drive our business, and we’re in a fashion business and we’re a fashion retailer.”

Macy’s is making the effort, having established its Designers-in-Residence of the Fashion Incubators program, which provides a select group of designers with work space and guidance for a year, in collaboration with the cities of Philadelphia, San Francisco and Chicago; academic institutions; industry organizations, and apparel firms. The store is also making a major push to market fashions for Millennials, with the French-ingenue-inspired Maison Jules private label among the recent additions to the Impulse department, and Monday’s launch of Ryan Seacrest Distinction men’s tailored clothing and furnishings.

Bergdorf Goodman, seeking its own edge, will build a “lab” for emerging designers on its sixth floor, as part of the company’s BG 20/20 vision for overhauling the women’s store.

The Council of Fashion Designers of America supports emerging talent through its CFDA Fashion Incubator program.

Lord & Taylor in a few weeks will introduce Birdcage, which Liz Rodbell, the president of Lord & Taylor and Hudson’s Bay, said was “an accessory initiative that could have broader legs into apparel as we move forward.” She explained that wardrobing young professionals is a growing opportunity for Lord & Taylor, and that Brand Assembly and Birdcage factor into the strategy.

Also at Lord & Taylor, 424 Fifth private sportswear, rivaling Lauren Ralph Lauren, Calvin Klein, Michael Michael Kors and Vince Camuto on the better-price sportswear floor, was launched last February, and the shoe department on the second floor of the Fifth Avenue flagship was renovated and will have a wave of designers, including Vince Camuto and Steve Madden, appearing for the official opening on Wednesday. On the active side, HBC Sport, a private-label activewear collection that includes yoga pants, sweats and T-shirts, is being introduced.

“Fashion excitement sometimes comes from new designers and sometimes it comes from the mainstay pillar brands and designers,” Rodbell said. “We have always looked for fresh new ideas and new designers to collaborate with.” They’re just looking harder now.