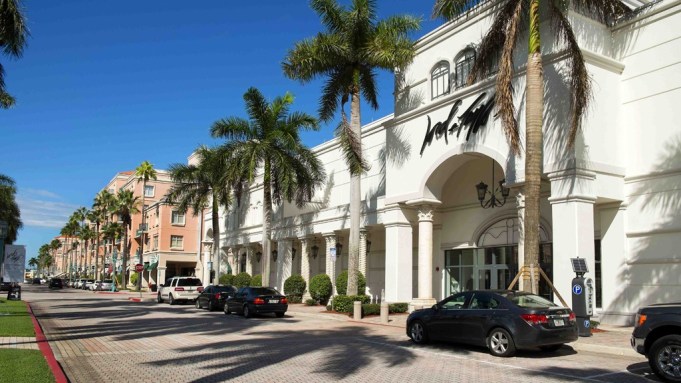 The opening marks the return of Lord & Taylor to Florida after closing its 11 doors in the Sunshine State 11 years ago.

“This could be the lifestyle shopping-center anchor for the future,” Richard Baker, chief executive officer of Hudson’s Bay Co., the parent of Lord & Taylor, told WWD. “Venturing outside our core northern corridor creates real opportunities,” particularly when L&T can serve up a more compact, highly edited assortment as it does in Boca Raton.

“I would have never left the marketplace in the first place,” added Don Watros, chief operating officer of HBC.

Opening well outside L&T’s northern and Mid-Atlantic territory means buyers will have to learn the taste level and style preferences of the Southern clientele. Also, since the Boca Raton unit is the lone Lord & Taylor in the state, the company won’t be able to leverage the costs of shipping goods and marketing the store as it could if it had multiple sites in the market.

In interviews with several executives, the L&T team addressed the challenges, saying they’ve created a warm, inviting store centered on “accessible luxury” with some touches of merchandising that are more upscale than most of the other units in the chain. They said the store is stocked Florida-appropriate, with outsize assortments of sandals, open-toe women’s shoes, sunglasses, swimwear, easy sheath dresses that cover less, lightweight fabrics, and an overall assortment that’s a tad more casual.

Though L&T does not have the kind of localized buying organization that Macy’s has in place, “We believe our merchants organization is agile and focused,” said Liz Rodbell, HBC’s incoming president and chief merchant. “Years ago we didn’t have a robust planning organization. Today we do. We have regional planning people that look at assortment opportunities at a by-store level.”

L&T is also working closer with vendors to localize the assortment. “Our brand partners are very astute helping us in the assortment,” Rodbell said.

The store’s general manager, Mindy Horvitz, has previously managed two Saks Fifth Avenue stores in Florida, so she brings knowledge of the market to L&T. She is also the store’s ambassador, actively networking at events in the area to attract customers.

According to Baker and Rodbell, Lord & Taylor in Boca Raton has a built-in base of customers since many people in Florida previously shopped the store when it operated in the state, and snowbirds from the North already know it.

“I want to put stores where our customers are,” Baker said.

As far as taking the Lord & Taylor brand national, “I don’t know,” he said, emphasizing that the Boca Raton store represents “a continuation of our testing.”

But he believes Lord & Taylor has legs and could be the anchor alternative for lifestyle centers which typically count on such nonfashion businesses as Whole Foods or Pottery Barn as their retail centerpieces.

Last year, L&T opened stores in Rockingham, N.H., and the Ridge Hill center in Yonkers, N.Y., marking the first openings in 10 years. The next opening will be in 2014 in the Crossgates Mall in Albany, N.Y.

In Florida, Lord & Taylor has been aggressively marketing  since last April with a campaign in local newspapers, magazines, online and on billboards. The message has been “Dear Boca. We missed you. Love Lord & Taylor” or “Dear Boca, We’re the perfect pair,” with a picture of shoes.

“Based on our feedback, people are excited we are coming back to Florida,” Rodbell said.

Baker said while L&T, with just the Boca unit in the market,  won’t get the cost efficiencies of being able to market multiple stores, the increased revenues obtained through Internet sales would more than make up for the costs. He also noted the low costs of marketing online. “This is a different world from 10 years ago,” Baker said.

He said Mizner Park is the type of location where Lord & Taylor typically excels. There are no other department stores in Mizner Park and just a handful of fashion boutiques.

“Here, we are not in a mall. You drive up, walk in, shop,  walk out. You don’t have to deal with all the mall stuff,” Baker said. L&T 10 years ago operated in the Boca Raton Town Center mall a few miles west of Mizner Park.

The new two-level store is expected to generate above the $210 in sales per square foot (gross) that the 49-unit, $1.5 billion chain generates overall, according to executives. That could put it in the $20 million annual-volume range, though the executives declined to discuss its projected volume, or the cost of the store.

Recently, Lord & Taylor’s performance has been lackluster, with a negative 1 percent comp posted last quarter. According to Watros, L&T’s business in the current quarter is tracking “slightly ahead.”

On a tour of the store,  Horvitz and Rich Weiner, senior vice president of stores, highlighted some of the merchandising that would be considered more upscale than in most other Lord & Taylor stores, like a Theory shearling coat for $1,725 or a $1,000 pair of Missoni women’s shoes. They also highlighted the visuals, including the increased use of mannequins — 300; the Italian chandeliers above the escalators, and the boutique-y feel of the selling floor. Many of the brands have boutiques, though they’re not walled off, providing better sight lines across the selling floors. Canopies above the cosmetic shops are a foot higher than normal, providing further visibility.

Boca represents an evolution from the Rockingham and Ridge Hill stores, which are basically white and contemporary. “They were a little bit too white and flat,” observed Kerry Mader, executive vice president of store planning and design at HBC. Boca still has a white palette, with crisp white porcelain tile floors and white columns that recall those in the Fifth Avenue flagship, but there’s texture with various wood finishes on shop pads, ceilings and walls, and lots of molding on the walls and columns to add warmth and a residential feel. The mix of fixtures — round glass tables, mirrored rectangular tables and étagères — add visual appeal, and a lighting expert spent a day in the store directing the spotlighting to focus on specific products and brand signs.

Though small for a department store, the store feels spacious, with no walls on the selling floor excluding the perimeter walls, for longer sight lines, and 150- to 200-square-foot foyers at the entrances to help shoppers get their bearings.

“There’s a more open feel to allow you to easily flow from one brand to another. If you look at BCBG or Cynthia Steffe, they feel like little boutiques as opposed to a mass of fixtures,” said Weiner.

“We have an opportunity in some of our stores to go more upscale but the focus is not to go luxury,” Rodbell said. “We are satisfied with our positioning — accessible luxury and a more-edited assortment than a department store.” She cited Michael Kors, Stuart Weitzman, Theory, Ralph Lauren, Calvin Klein, Black Brown 1826, BCBG, Free People and Coach as among the key vendors at the store.

There’s also a new omni approach to drive sales, with Boca being L&T’s first store outfitting sales associates with iPads — 20 of them. If a customer wants an item in a color, size or style not found in the store, the associate can use the iPad to check L&T’s online inventory and the inventory at its other stores, and if it’s available, L&T will ship it to the customer’s house for free, provided the order is at least $50. The service is as an advancement of the omnichannel platform launched Sept. 10 at all L&T locations enabling the registers to search inventory at other stores and online. While those searches could hold up the checkout line for up to two minutes, associates are trained to inform those on line that there’s a search process underway that could help them too.

Other services and amenities at the Boca store include a spa room, personal “fashion advisers” who act like stylists, valet parking and a men’s lounge area where there is a TV. “We’ll even run out and get a Starbucks for them,” said Horvitz.

Asked what role he played in creating the store, Baker said for him, it’s more about putting the right team together and letting them do their thing. He believes the store is the chain’s most elegant, though he acknowledged it has limitations due its size and can’t sell certain categories, such as children’s or petites.

Other executives, like Bonnie Brooks, president of HBC, were deep into the tweaking. She reportedly chose the chandeliers and had a strong opinion on the facade, which was originally yellow to match the rest of Mizner Park. She convinced Baker to paint it white, though the paint job wasn’t in the budget. “It cost us $100,000,” he said. “Now we own white.”