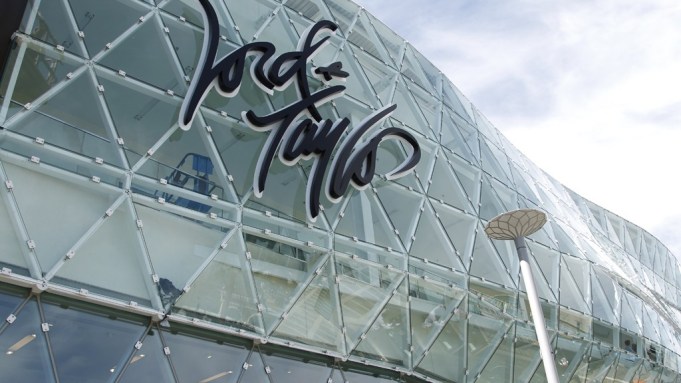 The 80,000-square-foot, two-level Lord & Taylor is a far cry from the suburban character of the department store’s other units, and according to sources, it cost roughly $30 million to build. That’s more than the company would normally consider spending, except that Forest City Enterprises, Ridge Hill’s developer, reportedly pitched in most of the cost. Its goal was to land Lord & Taylor as an anchor as a substitute for Saks Fifth Avenue, which reversed its decision to become a tenant. Lord & Taylor serves as the sole anchor in the center. Officials declined to comment on the store’s cost or projected sales volume.

The store is compact, with 32,000 square feet of selling space on each level, yet feels spacious. Large, four-by-two-foot Italian white tiles throughout further the effect. There’s also a unique asymmetrical racetrack aisle, for angular navigation, rather than the standard straight end-to-end approach. The ceiling is adorned with triangular frames for the lighting, rather than the standard fluorescent tubes, and metal floor plates at the foot of the mannequins identify outfits, in a clever departure from the usual signage. “It’s definitely the future,” said Kerry Mader, senior vice president of store planning, design and construction at Hudson’s Bay Co., parent of Lord & Taylor. He noted that certain elements of the store will be transported to the three or four remodels planned for next year, as well as the new Boca Raton, Fla. store, in Mizner Park, set to open in fall 2013.

Liz Rodbell, executive vice president of merchandising at Hudson’s Bay, said she expects Ridge Hill to be “a top producer from a sales-per-square-foot perspective,” rivaling Lord & Taylor’s top branch store in Scarsdale, N.Y., about 3.5 miles from Ridge Hill. That unit generates between $90 and $100 million in 180,000 square feet, or over $500 a square foot. At that rate, Lord & Taylor in Ridge Hill would generate at least $40 million. “We are expecting big things here,” said Rodbell.

Much about the store is unexpected. For example, there are “strike zones” for certain brands, such as Lauren, that interrupt the wide open flow of certain aisles but are easy to get around. Or on another aisle, there could be big fiberglass columns that span out on the ceiling. “There is no real definition of aisles. Departments flow into each other,” observed Mader. “It’s very organic.”

More thought was put into the fitting rooms, too, where the lighting is angled to minimize glare off the mirrors. In addition, elements of Lord & Taylor’s Fifth Avenue flagship renovation were copied at Ridge Hill, including the latest in cosmetics brand installations.

Just like the architecture and fixturing, the merchandising is skewed to Lord & Taylor’s most modern and contemporary labels, and many of Lord & Taylor’s best-selling vendors. “Absolutely, we had to make some choices,” Rodbell said, referring to how the store is edited given its smaller footprint.

Dresses, which Lord & Taylor has long been known for, occupy 4,800 square feet, and include Tadashi, Lauren, Adrianna Papell, Laundry, A.B.S., Jessica Simpson, Nicole Miller and BCBG. Other key vendors in the store include Vince Camuto, BCBG, Free People, Ivanka Trump, Lauren, Coach, Michael Kors and Kate Spade. Still, while somewhat constrained by the space, the merchants didn’t hold back entirely. There’s a 7,000-square-foot shoe department situated where there will be heavy traffic, near an entrance by the parking deck. Shoes represent about 10 percent of the selling space, more than what Lord & Taylor typically devotes for the category. “We really went after footwear,” Rodbell said.