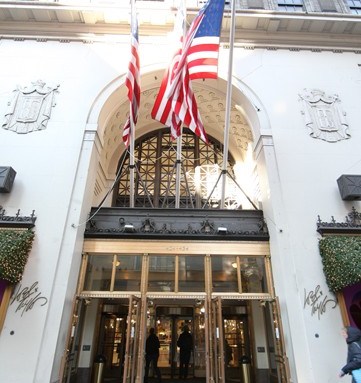 Lord & Taylor is proud to be firmly back in the mainstream.

And, at least according to store executives, the latest numbers show the store is riding better-than-expected fall business — the kind that validates their controversial strategy to “mainstream” the matrix and reverse years of reaching for a higher niche. Gains of 6 and 12 percent for September and October, respectively, are also elevating expectations for a decent holiday season.

“We are having a great third quarter here,” Brendan Hoffman, Lord & Taylor’s president and chief executive officer, said in an interview last week. “Christmas will be a lot better than we feared, though still below 2007 numbers. It will far exceed our expectations. We did take a bet on inventory. Our sales trends are outpacing our inventory level. Now we are chasing the business, which is where you hope to be. We are back to chasing inventory again.”

It’s not completely a slam dunk. The sales comparisons are easy since business in fall 2008, industrywide, was very weak due to the precipitous market drop and warm weather persisting through the first half of October. A portion of September and October 2009 increases, Hoffman acknowledged, were off a low sales base of a year ago. “But a portion of it we also see as a positive reaction to the changes we are making,” he added.

For the understated, reserved Hoffman, in the year since he’s been at the helm of Lord & Taylor after serving as ceo of Neiman Marcus Direct, there’s been more drama at the store than he would ever have imagined. Not long after the Dow dropped, Lord & Taylor’s sales and support from the vendor and credit communities started declining and several buyers jumped ship. Then decisions were made fast to reposition the business, bring back moderate brands that were dropped, and stage quarterly mass meetings at the flagship to ease industry concerns — providing a level of transparency atypical of privately owned retailers — and explain the chain’s direction to suppliers to get them on board.

“The meetings were definitely a turning point, giving us some room to operate and to try to put this strategy in place,” Hoffman said. “I told them I wanted them to have the facts and to share information that in the past we did not share.”

“We promised them as we made progress in our strategy, we would share data, even though we were not obligated to,” added Jeffrey Sherman, ceo of the Toronto-based Hudson’s Bay Trading Co., parent of Lord & Taylor. “We wanted to make sure they knew doing business with us was no more risky than doing business with anyone else.” A third meeting will be held later this month.

According to Hoffman, who reports to Sherman, Lord & Taylor is going mainstream and “trading appropriately” after five years of honing a niche between Macy’s and Nordstrom. Now it’s moving squarely in Macy’s territory and swimming in the vast midtier. It’s putting greater weight behind such brands as Nautica, Gold Toe, Jockey, Jones, Nine West, Kenneth Cole, Jessica Simpson, Le Sac, BCBGeneration and Lauren by Ralph Lauren, which were either dropped or not emphasized before, and halting the expansion of aspirational brands like Elie Tahari, Hugo Boss, Lafayette 121, Theory and Stuart Weitzman, confining them to eight or nine units in affluent communities such as Scarsdale and Manhasset, N.Y.

“Lord & Taylor had a strategy to trade up,” said Hoffman. “At the time, it made a lot of sense and I really felt with my background with Neiman Marcus, I could get us there a little quicker. But when the Dow hit 8,500, suddenly trading up was not as good of a strategy as we thought a week earlier. It was really the motivation to change courses and we needed to do it quickly. We right-sized the company, and have been bringing back moderate price points.”

Despite going up against the competition’s bigger buying power, “We can absolutely be very competitive when it comes to price,” Hoffman said. Getting exclusives, which every store tries to do, he acknowledged, is “going to be an uphill battle.”

“I have a lot of respect for Macy’s,” said Sherman. “It’s a pretty dominant department store. I think we can live in partnership with that organization and cater to the customer who really doesn’t want the full range of diversity in terms of product. We can focus on a more targeted customer than Macy’s has the opportunity to. It’s easier for our customers to shop our stores than our competitors.”

Lord & Taylor’s stores, he noted, average about 100,000 square feet, whereas Macy’s can be twice as big or larger. “We can offer an environment that is more appealing,” Sherman said. “The strategy is to return to what customers always expected from Lord & Taylor. We’ve probably added back in 30 resources of the 300 or 400 that we carry. We didn’t need to change [the mix] dramatically. We haven’t abandoned the new vendors. We’ve just added to what was here and brought back what was exited. I don’t see that as trading down at all. I believe you can widen the merchandise matrix and keep that customer — a better moderate customer.”

To facilitate the repositioning, Lord & Taylor has taken a decentralized approach, whereby the two regional store vice presidents and the general managers have a say in determining the mix and needs of individual stores. A few months ago, an executive vice president of stores position was created so stores could have an even stronger voice.

Among other steps, Lord & Taylor is growing its private labels, such as Black/Brown 1826, Kate Hill and the cashmere program, which currently represents about 10 percent of the business; bolstering special sizes; reentering the trim-a-home category, and testing a loyalty program while maintaining its robust offering of savings passes, otherwise known as coupons. In another sign of the times, Lord & Taylor plans to open its first outlet next year and is close to determining the location. No regular store openings or closings are planned for the 46-unit business.

The business, its executives say, really resonates in places like Syracuse, Rochester and Buffalo, N.Y., and Danbury, Conn., where Neiman’s or Saks may not operate, putting Lord & Taylor at or near the top of the fashion food chain.

The “rebranding” of the business entails the “shop smart” advertising, special events like the recent “dating boot camp,” and stepping up e-commerce, all with the intent of casting a wider appeal from the 45- to 65-year-olds previously, to an age range of 25 to 65.

Also in the works is a major renovation of the 35,000-square-foot main floor of the flagship. The Fifth Avenue unit hasn’t been touched since 1977 and accounts for more than 10 percent of the chain’s volume, or roughly $110 million in annual sales. The mirrors on the columns on the first floor will be stripped; lighting will be replaced, making it easier for makeup artists to sell to customers; a “watch world” will be created; the handbag department will be redone, and men’s underwear, hosiery and robes will relocate to the 10th floor to create about 2,500 square feet of additional space for cosmetics and fragrances. However, the friezes and column caps will stay to keep the building’s historical character. Construction is scheduled to commence in February and continue through November 2010.

The flagship’s second floor, dedicated to contemporary sportswear and dresses and shoes, was recently renovated by knocking out offices to expose windows along Fifth Avenue, and add about 6,500 square feet for selling. At one time, there was a far more ambitious plan to renovate several floors and build a tower atop the flagship to maximize the real estate value; however, the recession erased the vision, at least temporarily.

The most dramatic maneuver has been cost cutting, with more than $100 million carved out of the $400 million expense budget, mainly through job eliminations and marketing reductions.

As far as the voluntary departures, which involved about 10 of the 40 buyers and a few divisionals over the past year, Hoffman said, “Turnover has not been an issue. We did lose a few people early on who were concerned over the prospects for the business. There is no question we have had turnover. However, it hasn’t struck me as anything different from what I’ve seen in my career. I could not be happier with my team.”

He says Lord & Taylor has been seeing more affluent shoppers, but not really because of any aspirational brands that are sold. “If they bought a $1,500 suit at a luxury store, they still want their Gold Toe hosiery and would want to come here and buy a belt and a tie as well,” he said. “Over the last three months, we have seen a more affluent customer coming back to our stores. We have found there is a market out there that appreciates more of a specialty store environment — smaller stores that are less overwhelming. There is a customer who appreciates being able to [readily] find the brands.”

While fall is up, sales will be down somewhat for the year overall, at just over $1.1 billion. But pretax profit is seen tripling to about 10 percent, largely due to the cost reductions and savings involved in discontinuing some flawed strategies, such as the Creative Design Studio for nurturing young designers and integrating Fortunoff, which was liquidated, into Lord & Taylor.

Some market sources have compared the repositioning to the old May Department Stores Co. management. May owned Lord & Taylor in the Eighties and Nineties and made it very moderate, promotional and undifferentiated, like its other divisions. Asked if it’s a return to the May way, Hoffman countered, “I don’t think so at all. Maybe it’s bringing Lord & Taylor pre-May Company. We are really focusing on the customer,” and a broader demographic. “I am thrilled my mother shops here. I am equally thrilled that my wife shops here.”