The department store has doubled the square footage devoted to men’s at its New York flagship this fall, adding a second floor of selling space. 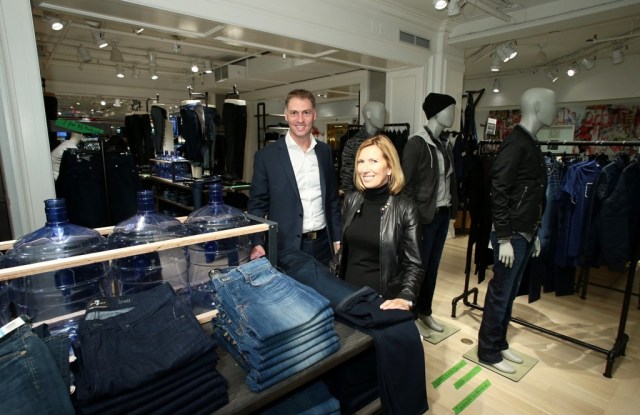 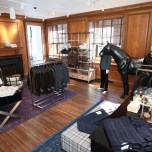 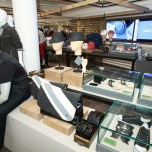 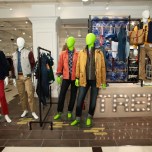 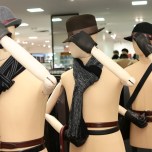 This story first appeared in the October 3, 2013 issue of WWD. Subscribe Today.

The department store has doubled the square footage devoted to men’s at its New York flagship this fall, adding a second floor of selling space. The expansion, which brings men’s to 100,000 square feet, is designed to capitalize on the growing importance of the sector and has thrust the store firmly into the contemporary market.

The expansion and renovation puts a stake in the ground for Lord & Taylor, which has historically been seen as a women’s store with a men’s department tucked away on the top floor.

“Men’s has been a growing business for us for a while,” said Liz Rodbell, chief merchant and incoming president of Lord & Taylor and Hudson’s Bay. “Our mission was to expand the men’s position on Fifth Avenue and in the market for Lord & Taylor. We’re on a great road and the men’s business is a great opportunity.”

HBC has definitely raised its profile in recent years, becoming a major player with its pending purchase of Saks Inc. to add to its Lord & Taylor and Hudson’s Bay nameplates. The $2.9 billion Saks acquisition is expected to be completed by the end of the year.

Until that time, the company is moving ahead with a $40 million renovation of the 625,000-square-foot L&T flagship, a project that kicked off last year. One of the biggest changes has been the addition of the ninth floor to the men’s department. In the past, all of men’s was compressed onto the 10th floor with furnishings on the main floor. All told, 22 brands have been added to the men’s mix.

Wayne Drummond, senior vice president and general merchandise manager of men’s wear for Lord & Taylor and Hudson’s Bay, stressed that when assembling the mix, the men’s team was “very careful to think through” the resources it would add to provide “updated choices” without alienating its existing customer base. “We’re evolving to support the whole young movement, but we also want to create an exciting environment for our core customers,” he said.

The ninth floor, which formerly merchandised home products and contained offices, is now home to sportswear and contemporary vendors as well as an expanded denim assortment. “Denim is one of the largest areas we exploited,” Drummond said. G-Star, DL1961, Joe’s Jeans and Seven For All Mankind are showcased in the new area. “We’re taking the opportunity to expand the premium end of the business while still continuing to give more options and ideas to our core customer and introduce new customers to the floor,” he said.

Outside of denim, the floor highlights updated classic merchandise on one side and modern collections on the other. In the rear of the floor is an expanded Black Brown 1826 department, the private brand designed by Joseph Abboud. “We’ve doubled the real estate for Black Brown,” Rodbell said. “And we grew our classic grid as well,” Drummond added. “So this is additive. It’s very important for our brand and our DNA.”

The floor has a loftlike feeling and the windows to the outside have been exposed, allowing natural light to spill in. The open feeling and the metal and wood displays are designed to provide a “comfortable, modern experience,” Drummond said. “We have the opportunity to create lifestyle messages now.” The number of mannequins on the floor has been tripled in order to offer inspiration to the men’s customer. “The loft environment creates a modern feel to the floor and is the mood we wanted to get across,” Rodbell said.

“We took our core brands to a whole new level,” Drummond said. He pointed to the “stealth shop” from Calvin Klein, a design that made its debut here, as an example, as well as the 30 percent more space that has been added to the Polo shop.

There’s an “active zone” on the floor as well, which is housed next to denim and offers brands including Under Armour, Puma and Superdry.

Rodbell said since the floor was converted to men’s, the company has experienced “tremendous growth” and the revamp is still being tweaked. Specifically, Drummond said John Varvatos Star USA and Rogue State have been “phenomenally successful right out of the gate.”

Ironically, Rodbell said her office had been located near where the Calvin Klein shop is now when she was a merchant at Lord & Taylor. In the back right hand corner of the floor, the former office of the store’s president is being used for a luxe offering of Black Brown. The fireplace, wood paneling and flooring from the office have been retained and serve to showcase the higher-priced merchandise. Rodbell said the luxe end of the line continues to grow in importance and the store has plans to build on it in the future.

Nestled near the escalators is an area where L&T will showcase up-and-coming or trending brands. The area includes an espresso machine, video screens and is designed as a “pausing point for customers,” Rodbell said. “This is an assortment of unique, specially curated items that we will continue to keep fresh.” Some brands are carried only in this area, such as Mads Nørgaard and New Balance shoes, and others have been pulled from elsewhere in the men’s store.

The 10th floor has been similarly updated with an airy design and a lot more mannequins. Furnishings is at the front of the floor in nearly triple the space it had on the main floor. “And we’ve added to the fashion assortment,” Drummond said, with additions such as Vince Camuto, Ted Baker and John Varvatos.

“We also saw a large opportunity to expand Hugo Boss,” he said, noting that the space has been doubled and a new shop installed. Other additions include Pure; Strellson, a luxe Swiss brand that has been a star at Hudson’s Bay stores and has been added exclusively to L&T in the States, and Bugatti. All of these brands are housed in new shops.

Within the expansive tailored-clothing department, Drummond said the “modern part of the business” has been expanded. There’s a sizable assortment of Tallia Orange, for example, that he said has been “flying” out of the store since it was added.

L&T is also jumping onto the lucrative shoe bandwagon with a new, larger department off the elevators on the 10th floor. The area features a number of new vendors including John Varvatos USA, Ted Baker, Dr. Martens, New Balance, Onitsuka Tiger, Fred Perry and Swims. “Shoes have been a huge growth category for us,” Drummond said. “And the space here is almost doubled. We’ve added 10 new brands and expanded the fashion [stockkeeping units].”

Rodbell said that, all told, this expansion and revamping of men’s is “just the beginning for us. We’re looking at expanding men’s in more stores and are evaluating the opportunities now where we can make it work.” She said that where applicable, the vendors that have been added in New York will be included in the branches as well. “It’s an objective for us and [this renovation] is consistent with the blend of where we’re going,” she said.

Drummond added: “The message we want is that we are actively in the brand-acquisition mode. We have the ability to be a specialty store in a department store setting.”