The department store is staging a campaign revolving around its rose symbol. 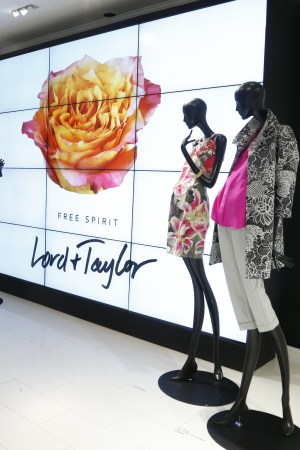 NEW YORK — Lord & Taylor is once again reviving a symbol of its past – the rose – to modernize its presentation.

Specifically, it’s the “Free Spirit” rose that has become the motif for marketing, visual display and merchandising at all Lord & Taylor stores in a campaign that comes into full bloom the last week of April and goes through Mother’s Day. Hundreds of women’s fashion and accessory items and gifts, designed with rose prints, rose embroidery or rose colors and with the cooperation of more than 50 designers, are flowing into all Lord & Taylor full-line stores. The campaign incorporates the tag line “Free Spirit.”

Liz Rodbell, president of the Lord & Taylor and Hudson’s Bay department store divisions of the Hudson Bay Co., practically had a crash course in horticulture to determine which rose to select for L&T. “There are so many iterations. We actually went through a lengthy process to land on this one,” she told WWD.

The Free Spirit variety was chosen because Rodbell felt it best exemplifies Lord & Taylor’s “new and adventurous spirit” and because no two roses seem exactly alike, she explained. “Each one has an array of colors. They’re imaginative, individual, and they speak to our internal culture and mission, to be innovative and different. They are really very attractive,” Rodbell said.

“Roses were everywhere on the runways of the spring 2016 collections at New York Fashion Week — every girl is going to want brightly colored florals in her wardrobe this season,” said Stephanie Solomon, L&T’s vice president and fashion director. “When you think of free spirit, you think of the Seventies and the influence of the Seventies in ready-to-wear, accessories and shoes — floppy hats, platforms, clogs, maxidresses — was all over the runways.”

The rose-related merchandise will be available through the fall. The rose itself will once again be the store’s symbol for years ahead, although Lord & Taylor merchants are charged with devising different merchandise promotions each year or so that could revolve around a trend, a silhouette, a color, or some other style theme. Two years ago, Lord & Taylor staged a promotion around the color red.

In 1946, then-Lord & Taylor president Dorothy Shaver introduced the “American Beauty” rose as the store’s symbol. Unlike the Free Spirit rose, with its spectrum of colors such as red, pink, coral and orange, the American Beauty one, in the eyes of Shaver and her team, evoked elegance, refinement and helped underscore the store’s carriage trade appeal at the time. After being dormant for decades, L&T revived the theme in 2008 with the Sunrise rose but suspended the symbol until this year.

Lately, business at Lord & Taylor, as well as many other retailers, has been challenging. The parent HBC doesn’t break out sales of its two North American department store chains. They posted a combined 4 percent same-store sales gain in the fourth quarter, with the Toronto-based Hudson’s Bay chain believed to have pulled up the results.

To improve traffic and business at L&T, store executives say they’ve adopted an “adventurous” attitude toward marketing and merchandising to cast a sharper contemporary, modern image. The Free Spirit rose “is a good fit” for the strategy, Rodbell said.

Elements of the campaign are already evident at the flagship on Fifth Avenue where windows are centered around rose-themed products, and inside, columns and floor pads are adorned with the rose symbol. There are also many mannequins dressed in rose-related dresses, jackets and sportswear. Free Spirit will be primarily in women’s rtw and accessories and includes all categories except men’s.

The campaign is most noticeable within the Birdcage shop, which has a wall of artificial roses creating a focal point. The Birdcage format, introduced in the fall of 2014 at the flagship, offers a mix of fashion, food, home products and gifts — generally contemporary products from designers and artisans without mass distribution, giving the store a point of differentiation. It’s being rolled out to 10 additional L&T stores, and at the flagship, was recently relocated from the second floor to a  prominent, 1,500-square-foot space on the main floor. The Birdcage is considered a pop-up concept because, as Rodbell said, it could take a hiatus for a season or a few months and then reappear. Products are primarily sourced through trade shows and word-of-mouth.

“The format requires a lot of extra logistics,” since the vendors are generally not geared up to fulfill the requirements of a multi-unit department store, noted Solomon. While products could go on sale, the Birdcage isn’t tied to L&T’s promotional cadence that often shrouds the selling floors. The Birdcage was originally an elegant restaurant on the flagship’s fifth floor with tea sandwich trolleys and an Italian flair. It closed more than 30 years ago.

Among the products displayed in the Birdcage are sunglasses with frames hand-embellished with rose designs from A-morir; metallic headpieces by Jennifer Behr; copper toned headphones from Frends; Kate Spade handbags and dresses, including a handbag in the form of a pail of roses; ath-leisure wear with witty sayings from Private Party and Bow & Drape, and rose gold jewelry from Bing Bang and Noir.

L&T’s temporary awning, running the length of the building, will be transformed from wintry evergreens to a blanket of roses. The retailer also will be planting rose beds in Bryant Park, an environmental enhancement and subtle inducement to visit the store.