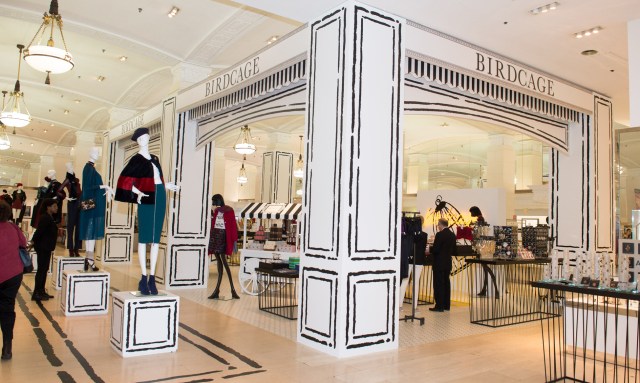 NEW YORK — Lord & Taylor, the oldest department store in America, is showing a Francophile side.

“The entire theme is based on Parisian chic,” said Lord & Taylor’s fashion director Stephanie Solomon, who worked on the concept for six months, scouring Paris trade shows and showrooms for product. “If you looked into the wardrobe of any chic girl, these are the essentials that you see.”

Birdcage and its French twist this season is a sign that Lord & Taylor can step out of the matrix now and then, and come up with some innovative merchandising. The format also reflects the retailer’s ongoing efforts to shed a reputation as “your grandmother’s store” and get more traffic, which is very much needed.

Lord & Taylor’s Birdcage was originally an elegant restaurant on the flagship’s fifth floor with tea sandwich trolleys and an Italian flair. It closed about 30 years ago but resurfaced last year as a shops-in-shop, with  differentiated fixturing, signs and flooring, that strives to project a sense of discovery and experience.  The Birdcage serves up a themed array of tightly edited exclusive or limited-distribution products that can change seasonally or a couple of times a year.

“We are really exploring new avenues,” Solomon added. “Everyone has got to change the status quo. Customers want exactly that. She wants new experiences.”

The French theme will last through holiday and the selection focuses on gift-oriented items, including accessories, jewelry, cosmetics, apparel, home products and food.

Showing confidence in the format, the retailer this year expanded Birdcage to 11 other locations, and officials hint at the possibility of additional Birdcage shops opening at other Lord & Taylor stores in the future.

Last spring, Lord & Taylor revived a symbol of its past — the rose — to modernize its presentation and the Birdcage promoted rose-themed merchandise, as did other areas in the store.

With the rose no longer in full bloom, Birdcage shifted to French imports and has adopted a “Toujours Chic” marketing handle, as seen in the style guide direct mail piece and online. It’s kind of like a country promotion contained in a relatively small space.

Among the Birdcage’s assortment are biscuits, hot chocolate, dark chocolate with salty caramel and other goodies from Angelina Paris; adult coloring books from Omy, a French graphic arts company; lace trim tap shorts, slips and camisoles from French designer Vannina Vesperini; Repetto ballet flats, and striped T-shirts from Saint James, which is said to have originated the look. There are also berets from Laulhère, a 174-year-old beret company, which reportedly at one time became France’s only source of traditional berets.

While the majority of the merchandise is imported from France, some of the product is provided by American firms creating French-inspired styles. Jewelry designer R.J. Graziano, for example, created push pins and gold-plated charms that say “merci” and “amore.”

Lord & Taylor will celebrate its Francophile spirit with a party at the Birdcage shop at the flagship tonight, and with a one-day French dinner offered at Sarabeth’s restaurant inside the L&T flagship on Friday, and Sept. 23 at the Eastchester, N.Y., location.