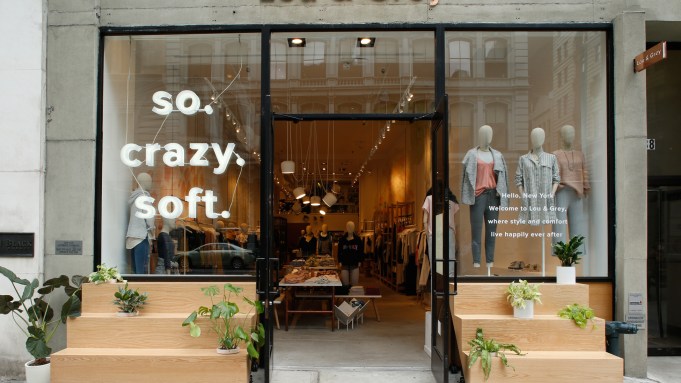 Lou & Grey, a two-year-old division of Ann Inc., opens its first New York store today as part of an evolution that could one day position the brand for a rollout.

The gallerylike space on Fifth Avenue near 19th Street in Manhattan’s Flatiron neighborhood, with 1,312 square feet for selling within a total of 3,122 square feet, has high, exposed ceilings, fitting rooms with feminine blush velvet curtains, a design studio, and an expanded collection that adheres to the brand’s roots in soft, comfortable fabrics.

There is also a large abstract mural by Brooklyn artist Caroline Hurley, and Lou & Grey’s signature 15-foot-long cement workshop table for merchandise display and the cash wraps that’s seen in the 11 other Lou & Grey stores around the country.

“This is the next chapter for Lou & Grey,” said Gary Muto, president and chief executive officer of Ann Inc., which operates Lou & Grey as well as Loft and Ann Taylor. Ann Inc. is owned by the Ascena Retail Group.

During a tour of the store Thursday, Muto said, “Over the course of the last year-and-a-half, we have opened 12 Lou & Grey stores, but we are still in learning mode, as I like to call it. We believe in the brand — otherwise we wouldn’t have made the investment.

“If the brand continues to perform up to expectations, we will continue the rollout. It’s a new concept. That’s why we have been very cautious.”

Along with the careful store growth, the collection has expanded its design and marketing teams, and its product range. Originally, when the first store opened in Westport, Conn., the collection focused on a neutral mélange of loungewear. But it’s grown to include many more prints and patterns, novelty touches such as embroidery and stitch interest, as well as leggings, bralettes, shirtings, wovens, anoraks and denim.

Lou & Grey has also stepped up its assortment of third-party makers that match the Lou & Grey aesthetic. For example, the store displays stationery and leather portfolios from Poketo, cheek and lip stains and skin care from Cap Beauty, and cropped French terry sweatshirts from Lacausa.

Austyn Zung, who is senior vice president heading up the design teams at Loft, Ann Taylor and Lou & Grey, accompanied Muto at the store and stressed that despite the collection buildup, there is continuity. “Our fabrics all feel buttery.” She noted that a couple of days each week, Lou & Grey designers work out of the studio, which is perched on a mezzanine overlooking the selling floor. They get inspiration by being in the store and interacting with shoppers, Zung said.

Along with the store opening, Lou & Grey today launches a marketing campaign themed “so. crazy. soft.” The campaign encompasses social media, a soft ice cream truck that will be in the neighborhood for a month on weekends with “so crazy soft serve ice cream.” There are also wild postings around town, and on Thursday, there were kittens in the store up for adoption to support the North Shore Animal League America, which ties into the campaign since “there’s nothing softer than a kitten,” said Michelle Horowitz, senior vice president of marketing for Lou & Grey. Several kittens were adopted, and one was named Grey on the spot.

Aside from the kittens, there have been some particularly popular fashion items in the store including the long rayon dresses with drawstrings, priced $59.50; cotton shirtdresses, priced $69.50, and the “brush-up” pants, in stretch sateen, priced $69.50. “We call them the ‘brush-ups’ because when you brush up against someone wearing them, it feels really good,” Zung said.

“Comfort is the overriding filter,” said Muto. “And you don’t have to sacrifice style for comfort. We offer comfortable, stylish clothes — end of story.”