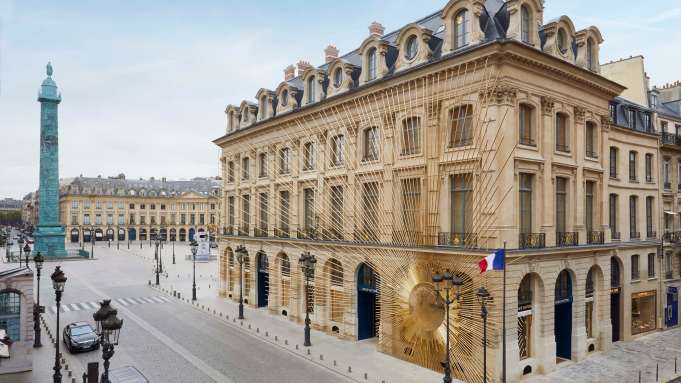 PARIS — “Louis, and Louis,” said Michael Burke, gesturing from a portrait of Louis Vuitton to a life-sized golden statue of King Louis XIV standing at the foot of the staircase in Vuitton’s new flagship on Place Vendôme.

“This is a very popular spot for selfies,” noted Burke, chairman and chief executive officer of Louis Vuitton, as VIP customers thronged the monumental store during a preview on Sunday, ahead of its official opening on Wednesday. A golden sun, temporarily installed on the facade, is proving an equally popular backdrop.

“What links Vendôme and Versailles? Louis Vuitton. It’s a trilogy, and it makes sense,” Burke continued. “Place Vendôme is the epitome and the origin of French luxury.”

Like the Château de Versailles, the square was built by architect Jules Hardouin-Mansart. Following a four-year renovation, Vuitton has become the first luxury brand to offer such a vast selection of products in the majestic location, home to jewelers such as Boucheron, Van Cleef & Arpels and Chaumet and watchmakers including Hublot and Jaeger-LeCoultre.

Designed by architect Peter Marino, the unit at 2 Place Vendôme sells high jewelry, watches, leather goods, accessories, women’s and men’s ready-to-wear, travel-related items and the Objets Nomades, a collection of designer travel and home objects, offered for the first time in France on a permanent basis.

It is also home to two specialist workshops: the high-jewelry atelier, which has moved from the former Vuitton jewelry store across the square, which will be taken over by Bulgari, and the Atelier Rare & Exceptionnel, where seamstresses create exclusive red-carpet gowns for celebrities, and fit and customize ready-to-wear pieces for VIP clients.

The location is a stone’s throw from where founder Louis Vuitton opened his first boutique in 1854. “When he came and he was selling his trunks to aristocratic families, it was here. Avenue Montaigne did not exist, it was residential,” said Burke.

Indeed, the new Vuitton flagship heralds a shift in the epicenter of Parisian luxury: Chanel is renovating a building nearby, while Dior is poised to take over the shuttered John Galliano store on adjacent Rue Saint-Honoré.

“There is a master plan to unify various retail sectors. That makes sense and that should happen because right now, they’ve been divided up,” said Burke, explaining that new developments aim to strengthen both the north-south artery between Rue de la Paix and Rue Saint-Honoré, and an east-west stretch that runs all the way from the Eiffel Tower to Notre-Dame Cathedral.

“If you can project 10, 15 years ahead, you know that this will be the crucial intersection,” he remarked.

The building reunites two classic Parisian town houses completed in 1714, which had been converted in the Eighties into offices, with the addition of two full floors. Marino returned ceilings to their original heights, and the facade has been restored.

Burke declined to say how much Vuitton has invested in the project. “In time, it’s priceless. It took us 10 years between purchasing and opening,” he explained, adding that there were more than 30 tenants in the buildings, including a Buccellati store on Place Vendôme and a Guerlain boutique on Rue Saint-Honoré.

“This building had died, basically, historically speaking, and we brought it back. It’s a renaissance,” said Burke. “We’ve restored it to its original splendor with not just the raw materials and the craft, but also, most importantly, the structure itself.”

The walls are made of limestone, with artisanal coverings ranging from straw marquetry to matte eel skin and silk paper, depending on the department. “This is 18th-century stone from a château that we bought and reinstalled,” said Burke, pointing to the checkered stone floor in the leather goods area. “There’s stone work, mason work, metal work, glass work — all the various trades.”

The store features 32 works by artists from every continent — including Vik Muniz, Stephen Sprouse, Yan Pei-Ming and Serge Alain Nitegeka — and two historical trunks from the Vuitton archives.

Entering from Place Vendôme, customers arrive in a high-jewelry department showcasing items including three exceptional sets designed to celebrate the opening. The brand’s watchmaking workshop in Geneva has created a one-of-a-kind Tambour Moon Tourbillon Volant “Poinçon de Genève,” made with 99 grams of platinum and 296 diamonds.

The door on Rue Saint-Honoré leads directly into the leather goods and accessories department, where exclusive products include a preview of the second chapter of Vuitton’s collaboration with American artist Jeff Koons, featuring Nicolas Poussin’s classic painting “Bacchanal Before a Statue of Pan.”

Among the rooms in this section is a former courtyard, now a vast handbag hall with a skylight. It leads toward the staircase, which is lined with clear glass panels fixed onto massive steel cables hanging from two girders on the third floor.

The first floor houses men’s wear, while the grand second floor, featuring tall windows with blown-glass panes, is home to women’s wear. With a spectacular view of the Vendôme column, the space was the venue for creative director Nicolas Ghesquière’s spring 2017 show.

Burke noted the original plan was to give the floor a historic feel, but after seeing the fashion show in the raw space, then still under construction, Marino opted for something more modern, with a parquet floor and parchment-covered walls.

“We said, if we do coppered ceilings here and if we do gilded woodwork, it would be a little Disney-esque. We don’t want to copy the old. The outside is 18th-century, the inside has to be resolutely modern,” said Burke.

With its soaring volumes — which had previously been divided into two floors — it is the brand’s biggest women’s wear department worldwide. “This volume, you’d be hard-pressed to re-create. It’s regal. It’s from those times,” the executive noted. “This would seem disproportionate anywhere else.”

The third floor houses a VIP salon, which can be reached directly via private elevator. A display case at the entrance houses precious stones that Burke valued collectively at $200 million, including an exceptional collection of 29 bright yellow brilliant-cut diamonds from the Zimmi region of Sierra Leone — yet another nod to France’s Sun King.

The salon will be used to host events, but mainly, the space is designed to cater to high-net-worth individuals staying at the nearby Ritz and Meurice hotels, and the future Cheval Blanc hotel within the nearby Samaritaine complex that parent company LVMH Moët Hennessy Louis Vuitton plans to open in 2019.

On the other side of the building, separated by the couture workshop, the Objets Nomades department includes the Campana Brothers’ Cocoon chair, Marcel Wanders’ Diamond Screen and India Mahdavi’s marquetry Talisman table.

Burke said made-to-measure and exceptional products now make up a sizable proportion of Vuitton’s business. He had just returned from an event in Singapore, where the brand sold 100 crocodile leather handbags.

“The big difference between Vuitton today and Vuitton 10 years ago is that the high jewelry, the watches, the made-to-order, the crocodiles, all the high-end businesses are a real business,” he said. “It’s 10 digits. So it’s the size of some smaller fashion companies.”

Burke said the exclusive products cater to a diverse range of customers. “You don’t know where wealth comes from today. Wealth creation is absolutely dynamic, it’s worldwide. It’s not three or four countries, it’s in 60 countries and that wealth fuels a real business. It’s not just about the communication,” he added.

Vuitton is offering its VIP clients a full program of events between the store visit and its spring rtw show on Tuesday evening, including outings to its workshops in Asnières, the Louis Vuitton Fondation in the Bois de Boulogne and several dinners, including one for high-jewelry clients at the Château de Versailles.