The store has been expanded to 10,000 square feet and offers two exclusive handbag designs. 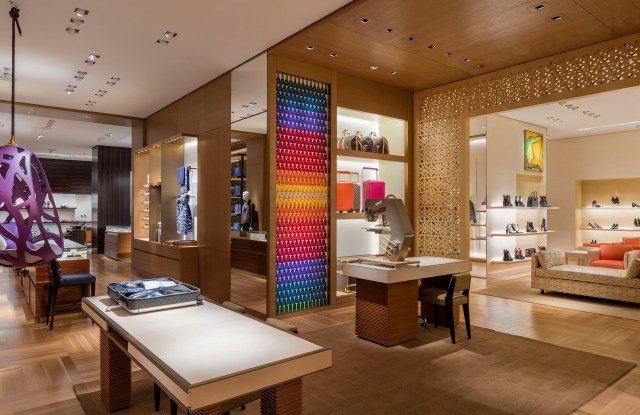 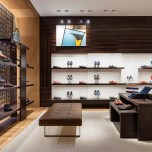 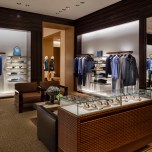 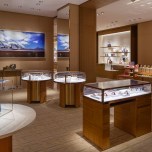 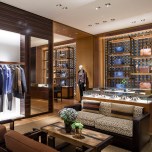 CHICAGO — Louis Vuitton and Chicago go way back — the brand’s travel trunks were first introduced here at the World’s Fair in 1893 — and now the French brand has pulled out all the stops, looking toward the past and the future for its newly renovated Michigan Avenue flagship.

Located at 919 North Michigan Avenue in the landmark Palmolive Building, the design of the one-story flagship takes into account the history of the building, the Gold Coast neighborhood where it resides and the city of Chicago, an epicenter for art and architecture.

“The existing façade is clearly historical – the listed Art Deco ‘Palmolive Building’. We were responsible for rebuilding the inside,” Marino said. “The façade has an extensive number of windows that bring light into the space – our challenge was actually more on the side of navigating a space that had almost more window than perimeter wall. We created a screen of metal and wood that runs the entire length of the ground floor, the pattern graphic and geometric, to let light pass through but to also provide a sense of privacy and intimacy for shoppers from within.”

The extensive renovations have been widely anticipated.

“We’re bringing back some of the verticality. The retail had been too horizontal. We’re bringing back some of the vertical mullions,” said Michael Burke, chairman and chief executive officer of Louis Vuitton, in town during the America’s Cup races in June last year. “It took a little bit longer than we had hoped for. The important thing is we’re building a store for the next 20 years.”

Situated on the corner of Michigan Avenue and Walton Street, the building dates back to 1929. The facade of the store incorporates layers of metal and wooden mesh to pay homage to the decorative look of the Art Deco era, while the bronze pattern on the exterior lends a nod to Vuitton’s signature checkerboard Damier handbags.

There are art gallery details throughout, like floating metal and glass shelves, situated upon entrance in the French limestone foyer, that exhibit its leather goods collection.

For the first time, four pieces from Vuitton’s Objets Nomades collection of travel-inspired furniture and home accessories will be on permanent display and available for purchase at the store. They include a violet cocoon chair designed by the Brazilian Campana Brothers, spiral lamps by the Switzerland-based Atelier Oï, and Concertina lampshades and chairs by Raw Edges, based in north London.

Marino individually selected all of the furniture in the store. Highlights include a Carlo Mollino Reale Table, circa 1946, a Folke Jansson “Tellus” seating suite from 1956, a Forties-era Gilbert Rohde lounge chair and Josef Hoffmann chairs from the early 1900s.

The late Marshall Field department store was the first exclusive retailer for Louis Vuitton in Chicago, and one of the first points of distribution in America, Burke noted. Vuitton has in its possession an antique Vuitton trunk belonging to Laura Field Diblee, Field’s younger sister. The trunk is customized with her name. Due to a change in floor plan at the store, the trunk is not slated to debut at the Chicago store at this time.

“Marshall Field plus Louis Vuitton — that gives it provenance and makes it unique. It sets it in a period of time,” Burke said.