"People feel cheered by color, and there is a direct relation between bright colors and sales," said Peter Marino, who has been working with Louis Vuitton since 1994. 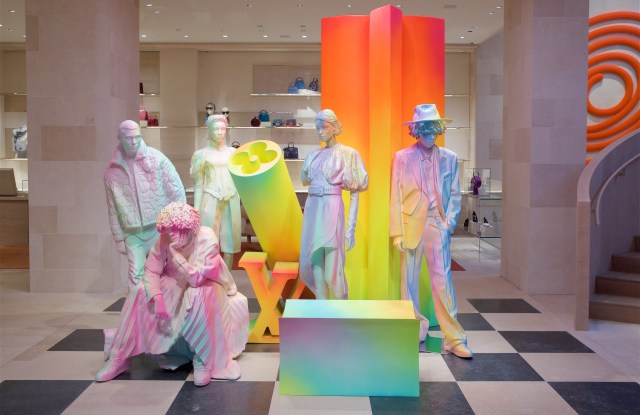 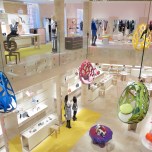 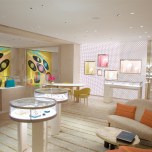 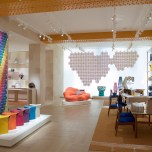 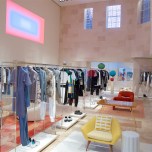 LONDON — Rain is forecast for Wednesday evening, just in time for the opening of Louis Vuitton’s refurbished flagship on New Bond Street, but that shouldn’t matter a whit. In fact, the rain and dark skies should only enhance the experience.

The store’s interiors, filled with citrusy, flouro and saturated colors, are as warm and bright as a month of sunny days, and for that extra jolt of energy there’s a zingy striped staircase by Jim Lambie that could be straight from Willy Wonka’s chocolate factory.

Peter Marino has torn apart the old interiors of the store, which first opened in 2010, and swapped the bling-y luxury and the gadgetry for something more playful, naïf and bright across the 17,500-square-foot space.

Gone is the old LED staircase that famously flashed in response to footsteps, and in its place there’s a double-helix staircase in pale wood linking the lower, ground and first floors. There are comfy bouclé-clad sofas and chairs in Yves Klein blue or chartreuse, and shop floor mannequins spray-painted in the colors of a psychedelic sunset.

Marino has also opened up the space and made it airy as can be, with a big skylight, double-height ceilings and lots of transparent walls so that no matter where customers are, they’ll get an eyeful of the pulsating, bright artwork, including Lambie’s striped staircase, which leads from the first floor to the upstairs apartment, VIP and events area. 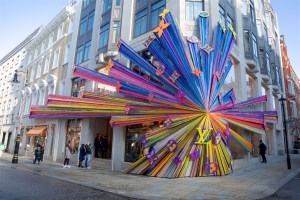 James Turrell has created a light installation called “First Blush” guaranteed to cure even the saddest of SAD sufferers, while Sarah Crowner’s horizontal tapestry, “Rising and Falling Forms (Magenta, Peacock, Scarlet),” shows just how hot and bright this store wants to be.

“For the store overall, I wanted space and light, and we are using immense washes of color in the artwork, which is displayed in a lighter, clear environment. We find people respond to these tones. Colors that resonated with the public 25 years ago don’t really work today. People feel cheered by color, and there is a direct relation between bright colors and sales,” said Marino, who has been working with Louis Vuitton since 1994.

There are 43 works of art by 25 artists from around the world, with the company having commissioned unique, site-specific installations from Sperling, Crowner, Lambie, Matt Gagnon and Farhad Moshiri.

“That is experiential,” said Marino, responding to a question about the latest craze for experiential retail formats. He added that the new volumes in the London Maison are so vast that they allow for both the art and the fashion designer “to be respected within the same space. In my eyes, the ultimate luxury is space and light.” 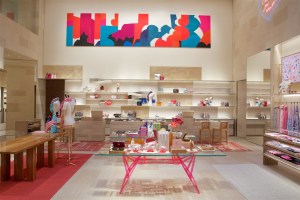 Adding to the trippy feel of the place are four colorful Cocoons by the Campana Brothers that dangle from the ceiling over the ground floor. They are from Vuitton’s Objects Nomades collection, which for the first time will be available on a permanent basis in the U.K.  The collection of designer travel and home-related objects, launched in 2012, has its own space on the store’s ground floor.

The New Bond Street and newly reopened Sloane Street stores broadly follow the template of the brand’s Place Vendôme flagship, with a neutral backdrop and big volumes. But they are not identical.

“With each new Maison we push the design innovation. It is a constant evolution that has worked wonderfully over the years. For London, I wanted the space to echo the streets of Mayfair and the sophistication of the neighborhood,” he said.

Marino said that over the years, he and Vuitton have moved away from all the brown wood they used at the beginning and swapped it with “beautiful clear beige French stone throughout,” while also working in stone, carbon fiber and cerused oak — where the detail and lines in the wood are clearly visible.

The bigger, soaring spaces echo those in Place Vendôme. “Volumetrically, we wanted to expand the existing space. We found that people respond better to ample volumes, so we removed slabs and created double volumes” on the ground, lower ground and first floors, he said.

He wanted the spaces to be flexible and meant for dwelling, as well as shopping. “In a luxury store, the experience of shopping must be out of the ordinary. Being able to pause and relax is one of those amenities that Louis Vuitton puts forth for its customers everywhere in the world,” added Marino.

For every four customers who enter any store, Marino said, only one makes a purchase, and that applies to every brand. “So what’s your goal as a designer? The goal is that all four leave with a very positive experience.”

The refurbishment was 14 months in the making, and it’s clear that London is a significant site for Vuitton, as it is for so many other luxury brands right now, due partly to the weaker, Brexit-battered pound and the constant influx of tourists from Europe, Asia and the Middle East.

According to the tax-free shopping company Global Blue, over the past 12 months spend in the 1,500 pound-to-5,000 pound bracket increased by 23 percent, while spend on goods costing 5,000 pounds-plus has seen a 36 percent spike in growth, with high-end watches and jewelry among the drivers.

“People are attracted by the ranges on offer, the availability of product and the value of the pound,” said Derrick Hardman, managing director of Global Blue in the U.K. and Ireland. 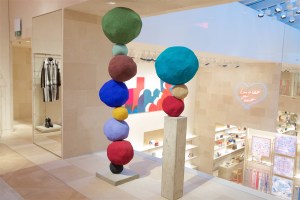 That enthusiasm is presumably why Louis Vuitton’s New Bond Street store is the only unit outside Place Vendôme that carries the full high jewelry collection. The new store is also offering a semi-couture, bespoke collection of dresses based on its red carpet designs for actresses and brand ambassadors including Michelle Williams, Emma Stone and Sophie Turner.

Upstairs in the VIP apartment sits a bespoke trunk that Vuitton has created to house Fortnum & Mason’s famous Camellia tea set. The apartment also has an extra room for events, lunches and VIP appointments.

In the men’s area, on the lower ground level, the space is just as bright and dynamic, with videos beaming out ad campaigns or runway shows, and shiny colored doors to the dressing rooms designed by Gaetano Pesce.

Marino said he works on three to four flagships a year for Vuitton, “and I never want any of them to look alike. The face of retail changes so fast. Bond Street is completely different from 20 years ago and consequently Louis Vuitton has to be at the forefront of this change. It’s very much a necessity for the Maisons to have these big, special statements in key landmark locations.”

With New Bond Street now in the books — and the wet weather due to settle in ahead of Wednesday night’s opening event — Louis Vuitton is moving on, with an opening in Seoul planned for next week.