Designer a hit on shopping channel. 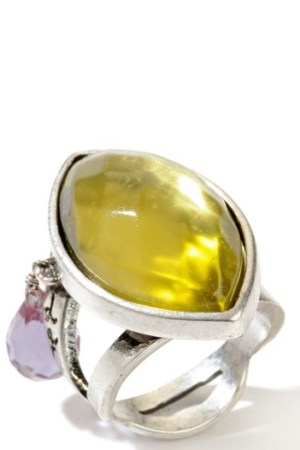 NEW YORK — Hawking products on a television shopping network is one of the last places you’d expect to see Loulou de la Falaise, one of Yves Saint Laurent’s closest collaborators, who created jewelry for his haute couture and ready-to-wear collections.

This story first appeared in the August 29, 2008 issue of WWD. Subscribe Today.

But there she was on HSN on Thursday morning, proffering advice to callers with style quandaries and sounding like someone’s fashionable Parisian aunt as she instructed women on how to put looks from her collection together.

De la Falaise was making her third appearance on HSN during the network’s “Fall Fashion Week” presented by Elle, and this time she brought along an expanded product range, including footwear, belts, handbags, caftans, ponchos, capes, duffle coats and sweaters.

She is getting to know the HSN customer, after two prior appearances, and considers her very style- and fashion-conscious. “I realize that the things that sell are not the comfort pieces, but the fashion items,” she said. Case in point: the suede peep-toe ankle boot and the metallic buckle three-strand belt, which exceeded sales plans for the airing, with each selling several hundred units in less than seven minutes.

“I travel a lot and see my customer all over the world, in airports and on the street,” she said. “Women are the same all over. I’ve a fairly good idea of what women want and the amount of comfort and glamour they want.” She said her clothes allow women to make dashing silhouettes with fun colors, while still feeling at ease with themselves.

The popularity of the boot surprised de la Falaise, who sold out of a $290 handbag during her last appearance in May. “It comes in very good colors such as black and ice blue, and beige and lavender,” de la Falaise said, trying to account for the shoe’s appeal. “It has a trim on it. I sold very well on the shoe, which is not my main thing. It’s quite surprising. I can’t really put my finger on it. Why the shoe? I guess it’s people’s moods.”

“I’ve always loved her iconic role in fashion,” said Kim Vernon, president and chief executive officer of Vernon Co., a brand growth consulting firm that matched de la Falaise with HSN. “I was very excited about HSN’s strategic changes with Mindy Grossman [ceo of IAC Retailing, which owns HSN]. Loulou loved the idea of reaching a lot of people. I went first to HSN and HSN understood it immediately. The idea is to develop a whole lifestyle collection around Loulou.”

Asked whether she’ll introduce new product categories on her next visit to HSN, de la Falaise answered: “I work in fashion and follow fashion. If suddenly people couldn’t walk out of the door without hats, I would do hats. I will do more rtw, dresses, blouses and bathing suits, and I intend to do objects for the home. Maybe I’ll develop some other jewelry line. This is very new.”