Love Is in the Air at Sam’s Club 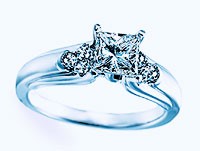 The branded Sam’s-Modern Love partnership launched last fall. Although the companies do not disclose revenue figures on the lines, sources said sales are strong and deemed the partnership a success.

Modern Love’s relationship with Sam’s Club goes back 13 years when the firm was a vendor to the retailer, selling its collections as unbranded merchandise. Today, Modern Love is the only branded, bridal set collection offered at Sam’s — except for Sam’s higher-priced, Regal Elegance brand in the solitaire diamond engagement ring segment.

What makes the new Modern Love-Sam’s relationship unusual is that most discount retailers don’t offer branded jewelry. For example, while Costco Wholesale’s online store may sell $400 Fendi handbags, it also asks $30,000 for an unbranded 2.28-carat round-cut engagement ring set in platinum. And while Costco.com or Wal-Mart.com offer a variety of engagement rings and jewelry, they lack clear brands to pull in consumers.

When the jewelry firm’s chief executive, Isaac Gad, approached the retailer last year about a specific Modern Love-branded line of bridal jewelry, the company’s prior relationship made doing so easier. The selling point was consumer preferences for brands.

“It’s really all about that luxury item, that luxury product. People don’t want to buy a generic piece of jewelry. They want to buy a brand,” Gad said in a recent interview. “We like to call it middle market bridal.”

Modern Love’s branded collection of International Gemological Institute-certified engagement rings, bridal sets, anniversary and wedding bands run from $800 to $10,000. They are set in either platinum, 18-karat gold or 14-karat white or yellow gold with diamonds bearing at least “SI” clarity ratings and “I” color ratings. The assortment can be purchased both at Sam’s Club locations and online at SamsClub.com; it can be viewed online at ModernLove.net, which is headquartered on West 46th Street here.

“Our whole concept was to target the couple or the guy looking to buy the ring, or the woman looking for a ring to tell her [future] husband about,” Gad said.

Expanding the offering, Modern Love and Sam’s will special order engagement rings, too. “The nature of the wholesale club is offering the best of the best,” said Gary Coleman, a diamond buyer at Sam’s, adding that “jewelry is the best kept secret in the Sam’s Club treasure hunt.”

The savings consumers can expect from Sam’s is also noteworthy. In keeping with the warehouse club philosophy — where profit comes from paid memberships — members will get the best value and higher quality in their Modern Love purchases, Coleman said. “In many cases, consumers could literally save half; [ring purchases] could be as much as half [the applicable retail] price,” he explained.

As a result, business has been “exceptional” when “compared to other segments of the business,” according to Coleman, and Gad reported a “significant increase” in Modern Love sales since the partnership launched.

In the meantime, TV personality Dr. Phil McGraw has kicked off a contest via his “Dr. Phil” show, daring six brides-to-be to reach their goal weight before their wedding days. Modern Love rings will be featured in a show to be aired in late February as a reward from Dr. Phil; brides who reach their weight-loss goal can choose a new Modern Love wedding ring or upgrade their current ring.