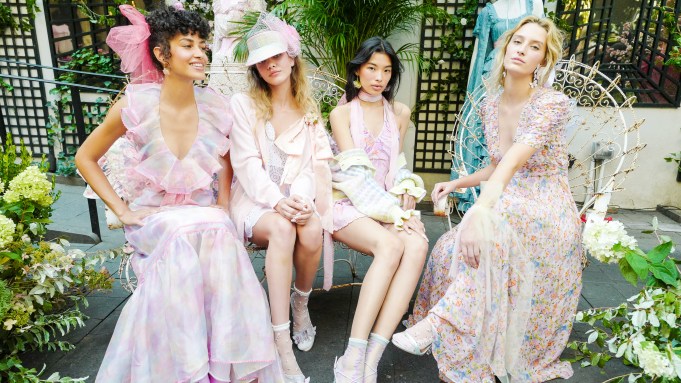 The vintage-inspired uber-feminine lifestyle brand, known for its pastel-colored dresses, lacy frocks and flowing gowns, hosted a garden party Wednesday at Ladurée, the Parisian-style restaurant in Manhattan’s SoHo neighborhood, marking the company’s first formal presentation at New York Fashion Week. Masks were replaced with beekeeper-like hats. But some reminders of pre-pandemic times made their way into the densely packed space, such as cheek kisses and models dancing in close quarters to the likes of Madonna and the B-52s.

The event was another example of a retailer offering an interactive pop-up like presentation for shoppers to engage with the brand, rather than a formal runway show, with its elaborate tea party set-ups, mommy-and-me matching outfits (Hilton and LoveShackFancy founder Rebecca Hessel Cohen brought their daughters), model and singer-songwriter Karen Elson playing acoustics, LoveShackFancy lemonade cart and a pregnant Pamela Tick baring her belly while DJing.

“It’s a LoveShackFancy world,” Hessel Cohen, who also serves as creative director of the brand, told WWD. “And we’re all just living in it.”

It’s an impressive feat for a brand to make amid a global pandemic. But in the last 18 months LoveShackFancy has literally been selling the fantasy of whimsical garden parties, dreamy backyard soirées and romantic getaways as it expands into innerwear, sleepwear, swimwear and bridal, among other categories. There’s also been a shoe collaboration with Sophia Webster and plans for skiwear and more home goods, such as wallpaper and bedding, this fall, along with talk of beauty products.

The company managed to open six brick-and-mortar locations in the last year as countless retailers shuttered physical stores at a rapid rate. Hessel Cohen told WWD in June that all of the shops are profitable.

“Now we’re opening pretty much one store a month over the next year,” she said at the time.

The privately owned company is tight-lipped about its yearly revenues, but did say annual sales on fashion platform Revolve were up more than 100 percent, year-over-year. A representative for the brand added that dresses and skirts (which come with price tags ranging between $300 and $700) remain the company’s bestselling categories — even during lockdown.

“This collection was designed for all the spring parties and events our girl will be attending as things start to get back to normal,” Hessel Cohen said, referring to the latest assortment. “I am so excited about all the beautiful gowns, slipdresses and matching sets.”